A flood of premieres: Eurobike 2016 to show the pedelec trends of the 2017 season – Large test fleet at the Eurobike Festival Days on the weekend

Friedrichshafen – Over the last few years, e-bikes have been more than just an important driver of economic growth in the bicycle industry. The bikes with electric assist motors have also generated new engineering and technology impulses in the market. Now, in just a few weeks, the Eurobike, the industry’s largest innovations show (August 31 to Sunday, September 4, 2016), is on the agenda. Once again, exhibitors will be bringing along plenty of interesting new e-bike innovations. 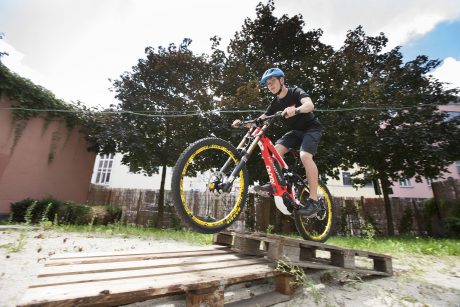 Since the e-bike trend took off in Germany eight or nine years ago, the market for bikes with electric pedal assist has only moved in one direction: up. A new record was reached in 2015 when 535,000 e-bikes were sold in Germany. The word among industry insiders is that e-bike sales are likely to remain at a similarly high level in 2016, despite less favorable weather conditions. So it’s no wonder that bike manufacturers and component suppliers have once again put a lot of time and energy into the development of new technologies. A special focus of these efforts is sporty e?bike models, whose share of overall sales has grown rapidly in the last two to three years.
For example, for the coming model year, component manufacturer Sram will offer a special e-bike variant of gear shift technology that is already available in its mountain bike segment. The new EX1 components’ ace up the sleeve is their design that relies on one front chain ring and eight rear sprockets. The American components manufacturer uses the space that is saved by this design to invest in a broader chain and gears made of hardened tool steel that can better deal with the forces at work on an e-bike than conventional bike components can. Such solutions have their origins in the Franconian town of Schweinfurt, where the US company develops all of its shift technology.

In contrast, the new Boltron suspension fork from Magura is a German-Austrian coproduction. The Swabian components supplier, especially known in market circles for its powerful hydraulic brakes, got together with Motocross specialists WP Performance Systems with the aim of building the perfect suspension fork for e?mountain bikes. The result is a suspension fork in an optically unconventional upside-down design that, with its especially robust construction, offers an alternative to the intrinsically higher weight of e-mountain bikes. The new suspension forks can be seen at the Eurobike on new models from Haibike and KTM, among others.

Attention to detail from the market leader
When you think of e-bike components suppliers, one name in the industry comes to mind more than any other: Bosch. After the electronics company’s e?bike division set off innovation fireworks at last year’s Eurobike, for 2017 the company from Swabia is focusing above all on details, such as the dual battery concept that uses a second battery to summarily double the range of an e-bike. This makes a lot of sense on cargo bikes, for example, or on e-bike models intended for long distance trips, such as those that can be seen at the Eurobike stands of Riese and Müller. Bosch will also present a 2017 update for its Nyon graphic display for e-bikes at the Eurobike. The highlight of the system is the new depiction of range, which can best be described as a “fried egg” view. That’s because, depending on the topography and quality of the road surface, the range is not presented on the map as a smooth circle, but rather as an irregular white shape.

E-bikes also conquer the niches
E-bike technology is especially clever when it becomes possible to combine it with other forms of transportation in everyday life. Manufacturer Tern is already a vanguard of urban life with its folding bikes, at least as far as bikes without electric drives are concerned. Now, the Taiwanese company’s first folding e-bike, the Elektron, will celebrate its premiere at the Eurobike. It’s worth a close look: the folding e-bike with a Bosch drive and 300 Wh battery is the most compact bike of its kind, according to its manufacturer.

Bike manufacturer MAXX is also a specialist serving a niche, albeit one of another kind. In the bicycle market, the company from the Bavarian town of Rosenheim is considered one of the pioneers of custom-made bikes that are built individually to meet every customer desire, from the frame to the last screw. Of course, in light of this, it was only a matter of time until the first custom-made e-bikes left the Maxx workshops. E-bikes with Brose and Shimano drive systems are available and in the future Maxx will also be able to fulfill customers’ more unusual e-bike requests, like large sizes up to XXXXL or fatbikes with electric motors.

Once again, the new model year promises to bring us some exciting new products and innovations. With 1350 exhibitors in 13 exhibition halls, the Eurobike, held from August 31 to September 4, is again the place where the industry and consumers can learn all about the trends of 2017. Whereas the first three days of the show will be reserved for industry visitors, the Eurobike Festival Days on Saturday and Sunday will open their gates to all bike fans. Visitors will be able to experience the pleasure of riding bikes themselves in the Demo Area and on test tracks measuring a total of 10 km and a special mountain bike track, it will be possible to perfectly put the advantages of the multifaceted electric bikes to the test.