As you know Alvaro is always on move; now he’s back to ride! Yes, Alve have ridden his KTM a couple of times, toghether with his mechanic Lorenzo Magnoni and his DaBoot friends. No ramps and jumps, just mx and freeride: Alve don’t want to stress himself but just to have fun, he prefers to focus on snowboarding and keep mx stuff for the good season. 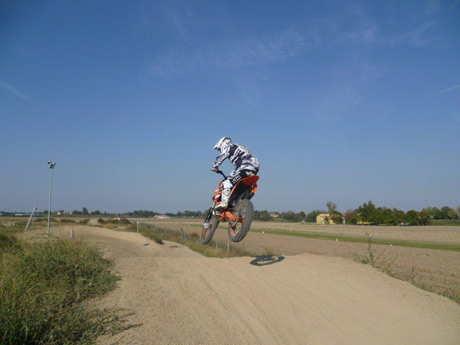 Alvaro took part in a photoshoot for MX Motosprint, in which he teached to Alex Boyce how to jump in a foam pit: we’ll se the piece next month, meanwhile the mag celebrated his coming back with a double page of him riding his bike in autumn colors.

In the last times Alve was involved as judge in all IFMXF world cup stops; he worked there as course technician too, bringing his great experience to assure safe, progressive and more spectacular courses.

EICMA, the International tradeshow of two wheels, held in Milan in November. DaBoot was there, with great fmx shows all days. Something new: durinf the tradeshow AR Racing presented his new remote model bike, which represents Alvaro with his KTM and his Alpinestars colthing. Alvei s now remote controller, even more aggressive than before! During the presentation the model jumped off a ramp for 21 meters, showing that Alve still can jump off ramps (or at least his 1:4 model can)!

On SKY Moto TV the format “Freestyle”, conceived and accomplished by Alve, is running new episodes every week, with a lot of guests in studio.

In the next weekends Alve will be in Vienna and Fortaleza, Brazil, for the last stops of IFMXF WC, after that finally it’ll be Christmas time, with a few days of rest, Xmas celebration and some parties!