In women’s snowboarding, Anne-Flore Marxer’s freestyle cred is in serious danger of being eclipsed by her growing reputation as a freerider.

Marxer got into the first FWT competition in Chamonix as a wildcard and won the event. She was invited to join the tour and finished on Sunday as the winner of the Verbier Xtreme and the 2011 Freeride World Champion. 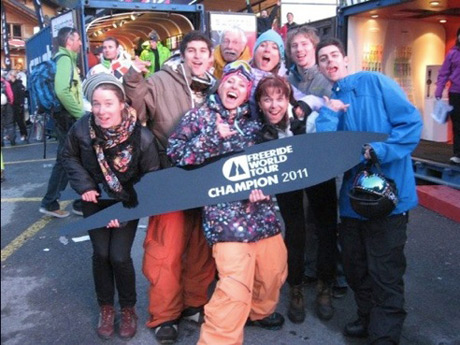 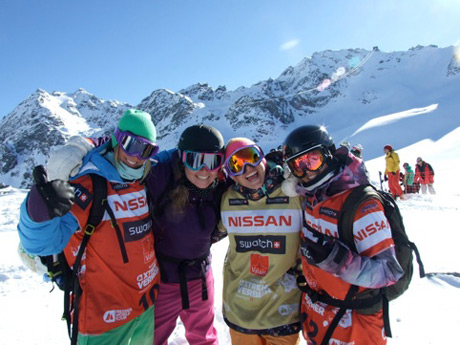 “I was thinking that I would take a steep line to take speed and jump a lot of cliffs but in the end I decided to be safe partly due to the sluff and hidden rocks,” Marxer said. “This title makes all my efforts this season worth it.” American Maria De Bari and Austrian Ursula Wohlschlager rounded out the women’s snowboard podium.

“Sunday was a big day for me, it was the finals of the world tour and all my friends and my mother came to watch the event.
I had chosen a line where the snow was best and which was following fall line, I bet on fluidity, cliff drops and speed.
It had just snowed and for safety reasons they had to bomb the face in the morning of the competition. When they did, 2 landings out of my 3 cliffs had gone.. I decided to stick to my line even though the landings were gone. entering the line the snow was really good up top, but after the first small cliff drop the snow had changed, there was sluff going on and many sharks were sticking out richt above the second cliff of my run.. I had to slow down knowing the the landing wasn’t so good.. that one was not the cleanest landing ever but I m glad I managed not to crash. On my last cliff drop I decided to come in with not too much speed as there was again many rocks right above it”

“One of the last runs of the day was going my friend Maria Kuzma who released an avalanche on her last cliff drop and was taken in it.. from the bottom area we saw her taken under and disappearing behind the hill. This was one of the scariest moments of my life. Her twin sister Janina, Aline, Jacki and I ran as quickly as we could to come to her, we couldn’t see her as we were running up the hill thinking she was burried. This was really strong hard emotions, we couldn’t get to her quick enough and I felt absolutely useless. luckily she managed to shovel her self out of it. I am so thank full she is ok. that was the biggest victory of the day. Snowboarding, freeriding, winning or loosing nothing matters more then enjoying the run and arriving safe at the bottom.
It’s been a long competition winter and I m off shooting for the rest of the season, can’t wait to shred POW!!

“it was my first year participation in the freeride competitions the addition of the 4 best results of the seasons count for world title, I’ve earned 6250 all together, here are my results in chronological order”