The second edition of the probably most unconventional and most fun orientated mountain bike freeride competition called ANTI Days of Thunder created just amazing photo and video coverage.
Watch all the highlights on www.antidaysofthunder.com to get a clue of the laidback, but still action-packed time the pros from all over the world had in Norway’s Hafjell bike park.
The riders teamed up to compete at the different competitions (Hafjell downhill race relay, BAB dirt jump session and Urge Intense slopestyle): 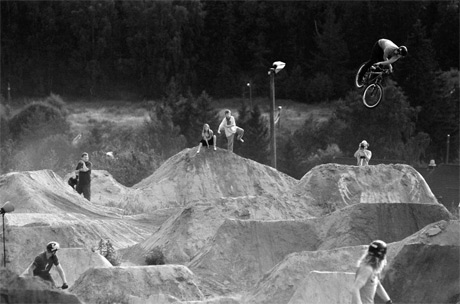 All riders had six days of their life with lots of bike riding, chill time and more fun than at any other comp. The first day was pretty easy, all the riders had arrived and got a feeling for the Hafjell bike park (please take a look on http://www.antidaysofthunder.com/2009/06/days-of-thunder-2009-videoblog-day1/ for the concerning video). Every second day, they had to show their skills also in one of the special team competitions.

Team North America won the Hafjell downhill race relay with a 5 second margin over team Norway. It just looked like pure racing fun, each of the riders taking one section of the trail (http://www.antidaysofthunder.com/2009/07/video-blog-day-2-hafjell-race-relay/).

Team Sweden won the epic BAB dirt jump comp, which some of the riders even called the best session of their life. The tricks that were shown were at the highest dirt jump level ever: Benny Korthaus showing a clean 360 double tailwhip, Sam Reynolds sticking backflip no foot cans and frontflips, like Trond Hansen did, too. Yannick Granieri made 360 tailwhips, as well as Sam, Benny, Trond and Niels Windfeld showed just perfect 360 tabletops. But it was the young gun Martin Søderstrøm who brought team Sweden the win of the dirt jump session, pulling nice stuff like 720s, double tailwhips and 360 tuck no handers (http://www.antidaysofthunder.com/2009/07/video-blog-day4/)!

So, after two of three comps, there was a tie between the team North America and team Sweden. It would have been the Urge Intense Slopestyle to secure the win. But unfortunately the slopestyle had to be canceled, because of too much wind. Jumping huge distances and being blown to the side or overshooting those jumps, because of the fast changing and often pretty strong wind conditions, wouldn’t have been any fun at all. But the riders enjoyed their time anyway. They just made some small tricks on and onto the table of the super-sized jumps. Watch http://www.antidaysofthunder.com/2009/07/video-blog-day3/ to get a clue what the big hitters looked like when they were sessioned during the days before.

The last competition still had to be mastered to get the overall winner of the ANTI Days of Thunder: The Beer Pong Challenge.
All of the teams had such a good time at this party, that it was decided, that the winners of the beer pong will win also the overall ANTI Days of Thunder. It was, surprise surprise, Team Central Europe to earn the ANTI Days of Thunder champion title that night. The Germans Timo and Benny, as well as the British Chopper and Sam, gave their best and took home the win. Specialized team rider Benny Korthaus was just surprised by the success in that important last competition which determined the winning team of the whole event: “I played beer pong twice before, didn’t really remember the rules in the first minutes, and I wasn’t the only one doing so. But anyways, the beer pong comp as well as all the days before and the whole concept of the ANTI Days of Thunder are just great. We all had so much fun, because the whole event was only about riding together and having a good time. Thanks To Trond, Niels, Joakim and Andreas for this great experience here in Norway!” 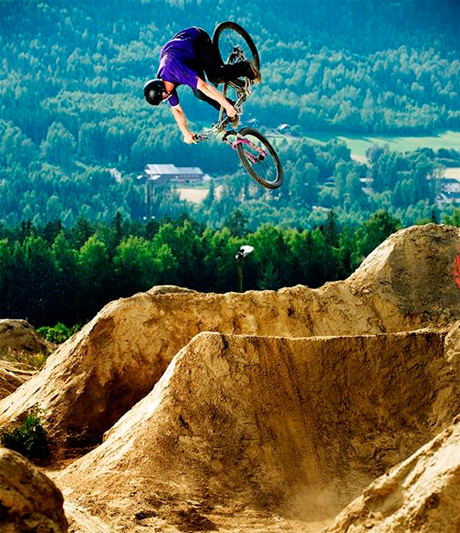 The statements of the other riders and people organizing the whole event had pretty similar wordings. Lluis Lacondeguy declared the ANTI Days of Thunder as “the best comp ever”, and ANTI marketing manager Andreas Braaten explained: “We had just a super sick week with many good sessions!!“

The real benefice of this week is also the unique content, pictures and video clips, that was created. Joakim Andreassen, one of the photographers points out the essence about the ANTI Days of Thunder for him: “The ANTI Days Of Thunder as a concept, gives the photographers a unique chance of getting prime shots in a way that is not common when shooting a contest. The more relaxed feeling with sessions and just riding takes away the pressure and the need for getting the money shot during one of a few runs. The ANTI Days Of Thunder are probably the most chilled way for a photographer to work regarding contests in general. Good times, sick riding, relaxed riders, and epic light are keywords that describe the event in Hafjell pretty well.“

All photos and videos can be seen on: www.antidaysofthunder.com.