Behindmag has an army you know? Not a traditional army, with rifles and helmets, but an army of people who truly believe us and support us anyway! Among behind’s army supporters there are athletes, creative persons, freethinkers and crowd agitators….sometimes it happens that all this different peculiarities, are concentrated in a single person: that is Rambo case.
Rambo is obviously a nickname and we are getting bored with explaining its nickname origin, so please accept the equation: Stefano Gozzi=Rambo.
Stefano looks like my childhood best friend, when i was peaceful polite, clumsy, well dressed and i did nothing different from my parent’s rules. My best friend was quite the opposite, wild, a pratical sort of person who was good at all sports, brillant, crazy, very immediate and direct in saying what he thought. Rambo is the same, and for this very reason me and all behinders appreciate him..’cause Rambo is a truly Behinder.

If i had to personify the adjective “local” i would just describe myself!
In a few words: someone not so ordinary, who cannot live far to his mountain and its location; the first who take the lift in november, and the last who left ’em in april, always there with every weather condition… 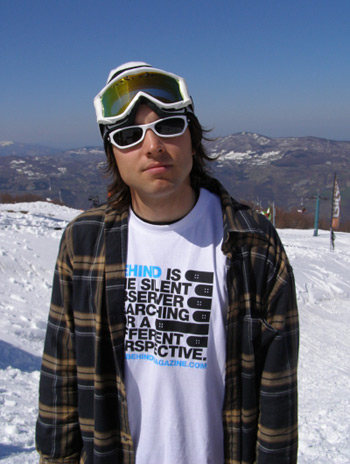 Define Behind in 3 words…

Style, consciouness and globalism…..
Without this italian mag, it would be difficult for us to be known abroad.

Well……..Argumentative, blasphemer, traditionalist…..
People who know me can add the other 2 words, so Ross it’s your turn to speak….

Now tell me why do you like so much flannel shirt….

Flannel shirts are always part of me. Essentialy i’m a provincial countryman, flannel shirt has an universal use, thanks to its strenght i can easily use it when i weld my broken fixed but also when ride on the snow. Flanel is like goretex except for its non-impermeability!!ahahahha….

Why is for italian riders in Europe so difficult to “survive”?

Firsty, i think that Italy consider snowboarding as an expensive pastime for rich people, as a consequence there are few people who invest money in well-done structures, so, the level does not increase..the only way to get by without problems is a big bank account, and the will to break trough! Fortunatly there are some reliable sponsors which show our rider abroad too!

Why in Italy the word “professionist” against the word “snowboarder”? do you think it’s sometimes right or wrong?

I think that “Pro” means “professionist” , professionist someone who lives only thanks to snowboard, so you can understand that in Italy there are few “pro”….However, the answer is the same: Few sponsors which invest, few money and bad-used… the profession of snowboarder is an utopia…

Tonight there are the new team video Burton preview party with Dcp, Jp, Trza and all the other big guns….but Justice plays at the Vox club….

Since i don’t care about Dcp, Jp there will be too many people, i’m going to Vox club: it’s nearer to my house, the road is almost a straight line and if i do a secondary roads there is not drunkometer…

I don’t understand the reason why people like sushi…

Especially when, you can eat a tortellini in brodo, pork fillet with balsamic vinegar, sitting on a chair in the nearby restaurant.

We wouldn’t have fun as we have a 3 o’clock when we needle the superposer from the park house: superposer take 1 km of run-up makes 16 turns, falls on the kicker transition and broke his head on the flat…

Why did you break my balls with the fixed (fixed gear bike) and now you have assembled your own fixed?

I have discovered that riding a fixed is an art, you can also skidding man…i have “borrowed” a bike and i fixed it….i worked hard for a month! You have to try one!.. and you will assemble you fixed too!

Why you are always so poisoned with everyone?

You have to consider that i’m half mountaneer, half from Reggio Emilia..

Why do you always listen to that noisy, gay, 80’s music…?? ok for Joy division, but you listen to that groups who have probably played only one song and than have died for overdose!!

A person you take as a model?

A person you would do without?

The polish woman who looks after the eldery man in the apartment upstairs. She vacuum cleans every fucking day at 7 o’clock in the morning….

A person you simply respect?

I respect everyone who respect me!

I want to thanks: Behindmag, Paul’s Boutique, Alex of Action sport agency, The Program, Chiara, my family, Betto and the other 1096 members, the Cimone boardriders, and all my friends!! Seeya next season!!!