While most locals were left in hot and humid conditions in the city, China’s snowboard community had better things on the agenda: to escape inside to the giant refrigerated snow dome which is temperature controlled to a cool minus one degree for a shred session, free demos and the music of three-time DMC Champion DJ Wordy.

Burton Snowboards’ Director of International Sales Craig Smith flew in for the event and commemorated the opening. Craig, whose experience lies in the development of the Japanese market has noted major improvements over the years and is ecstatic to be part of the action. “The Burton Qiaobo Mellow Park will not only benefit local riders, but also gives the global snowboard community an international standard park right here in the city of Beijing,” said Craig. “The timing couldn’t be better. The scene is growing, the riders are improving and we at Burton are proud to be a part of what’s happening over here.”

The new park, designed by Mellow Parks China Head Shaper Marco Huang, has something for everyone. Inspired by what he has ridden overseas and seen in the videos, Marco tried to bring in elements that will be fun for all levels of riding. “Everyone’s favorite obstacle is our super big funbox,” said Marco on the days rolling up to the event. “Actually, no one even asks me about the kickers or even our new wallride, all they care about is that we have one set up on the day of the opening!” Marco, who is one of the countries most experienced riders couldn’t be happier with the opening, “Now we have something to ride all year round! Of course I’m excited!”

Both Chinese and expat snowboarders sessioned the park in a two-hour jam format contest. Each rider was given a chance to claim an obstacle and walk away with sick prizes from none other than Burton Snowboards. Zhang Wei was given top honors for his 180-on-180-off on the downrail and X-Fox’s switch-270 on frontside  tail nose tail nose 270 out left him with the title for top funbox rider of the day. Perry from Chile proved himself on the bonk barrels with a frontside 360 nose tap, and Burton rider Wanglei was the top all-around rider of the day, pulling 720s and 540s and giving the crowd the show they came out for. Top ladies of the day were Yindi and JiJiGe. 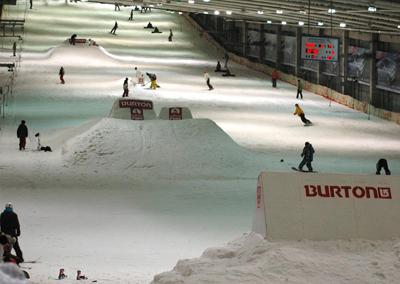 “Today was a huge step for the snowboard community in China,” stated Mellow China CEO Steve Zdarsky as he walked away with a grin, “I’m just stoked that we can ride 365 days a year.” 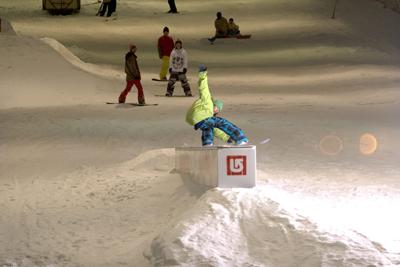 If you would like more information on The Burton Qiaobo Mellow Park, events or snowboarding in China please contact jess@mellowparks.cn (Chinese) or olli@mellowparks.cn (English).