2010/11 season will start with a Big Bang! the legendary Air & Style will tour around the world and on december 4, 2010 will stop at Bejiing, China, for the first Oakley and Shaun White present Air& Style.

Thanks the support of local institution Beijing Sport the 6 stars TTR event will take place at Olympic Sports Center Stadium, the same place that hosted Beijing Olympic games in 2008. 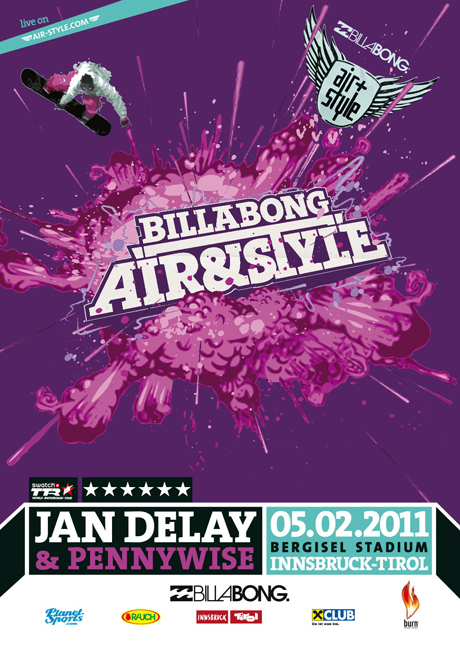 But that’s not all, folks! Billabong , after signing again for a 3 year contract,  present Billabong Air & Style Innsbruck-Tirol 2011 on February 5, 2011.
Who will be the first to land a triple cork? Will Marko Grilic hold his crown?

There’s no Air&Style without a party, so Jan Delay and Pennywise has been choosen to fire up the crowd.
Will the riders will focus on bringin’ home the € 75.000 prize-money , Bergisel stadium will transform into a open sky club with Jan Delay and his magic flow mixing disco, soul, hip hop, raggae and funk.
But Pennywise will be the first to heat up the crowd, playin’ some new exclusive tracks from the incoming work with the new frontman Zoli Téglas, ex Ignite singer.

Per further infos and tickets surf the official website air-style.com.