This year’s shooting star Danny MacAskill, mainly known through the most successful mountain bike online clip ever that was released 4 months ago, decided to sign with rasoulution’s athlete management program. Danny will join the rasoulution team, which includes riders like the Lacondeguy brothers Andreu and Lluis, Martin Soederstroem, Benny Korthaus, Trond Hansen and Roger Rinderknecht.

About 10,000,000 people already viewed Danny MacAskill’s online video clip that is broadcasted on different websites around the world. With the extremely high audience numbers on youtube (http://www.youtube.com/watch?v=Z19zFlPah-o), the 23year old Scottish trials rider drawed more attention than any other mountain bike rider ever and not only from the bike scene!

Since the days when the video was uploaded, Danny got addressed from all over the world in order to get autographs or for booking requests for shows around the globe. Danny had a busy schedule so far and now, since he eventually decided to work with rasoulution, he is confident and happy: “I really want rasoulution’s expertise to help me get the most fun out of the opportunities that have come up this year. I also believe that they will open a lot of doors for me that I would never be able to get thru myself!” 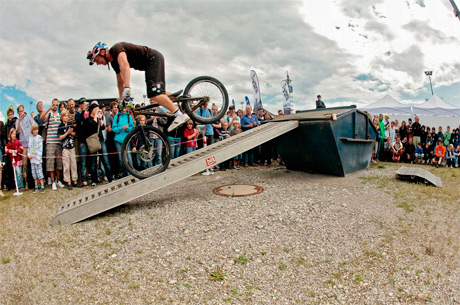 Danny MacAskill’s riding is different than anybody else’s. He rides trials, but also integrates elements from BMX, street and even flatland, together with mountain bike freeride. In his videos you see him doing flairs (backlip-180) on a tree, bunny-hop tailwhips, 360 drops of huge staircases, he rides along on a skinny fence or wheels backwards on his front wheel. You can name it progressive trials or urban freeriding, but in the end it simply stands for DANNY MACASKILL!

Born on the picturesque Isle of Skye he now lives in Scotland’s Capital Edinburgh and if he wasn’t a pro athlete, he once said: “I would probably just be a plumber on the Isle of Skye!” Danny is not only a good bike rider, but he also has a lot of of Scottish humour! Especially when he rides in front of thousands of people and signs autographs, he’s still humble, friendly and has always got a smile on his face. Danny stayed down to earth with both of his feet or to say on his bike for most of the time!

The bike phenomenon is riding since 1996, starting at an early age: “I have always really enjoyed riding bikes from a very young age and it is exactly the same today, I still ride my bike just for fun! I don’t ‘train’ or take myself too seriously!”

Anne Baltes, managing partner of rasoulution observed: “I heard the first time of Danny through Facebook, recommended by heaps of friends that actually weren’t involved in biking at all. I told Tarek, we should contact this guy, he is awesome and would be a great addition to our other athletes!”

Tarek describes his first encounter with Danny MacAscill’s video like this: “My friend the photographer Yorick Carroux sent the link only to three people in one email: to Hans Rey, Ryan Leech and myself! I instantly knew that MacAskill had amazing riding skills and in April we contacted him. We thought it would be good to have him among our group of athletes. We booked him for the BIKE EXPO in Munich and invited him for a first location check. Meanwhile Danny got approached by countless brands with sponsering offers and agencies intending to book him for shows around the world, or for commercials. Even the New York Times wanted him for an interview! But all Danny wants to, is to ride his bike and improve his riding skills. He is simply keen on learning new stuff. Being also fond of other aspects of mountain biking like XC, DH or Freeriding, he even entered a Mega Avalanche in the past. We are happy that Danny decided to work with us. Since the video his inbox is full of emails that he can’t answer and he needs support and consulting.”

In September, Danny MacAskill is planning to go to Interbike in Las Vegas, meanwhile he’s shooting a commercial and wiill ride some shows as well. Asked for his plans for 2010, Danny replies: “ride lots on my bike and travel around the world and meet lots of cool people along the way. I really want to make the most out of it”