The navel of the world – that’s what Rapa Nui is for its inhabitants and that’s what the remote island in the middle of the Pacific Ocean was for the world elite of high diving this weekend. The kick-off competition of the Red Bull Cliff Diving World Series 2011 was affected by the Tsunami warning but blessed by the Manu Tara’s – the lucky bird’s – presence and watched by an eager audience of 2.000 people.

With an outstanding performance, nine-time world champion Orlando Duque, from Colombia, bettered his competitors by more than 40 points to take victory in the first competition.

It was exactly seven months ago that the Colombian won the 2010 World Series’ final competition, having finished second overall, and announced his intention to reclaim his title in 2011. Coming back to the 27m stage after an intense off-season preparation, the 36-year-old took the first step on the road.

“It’s the challenge with our sport that sometimes you just have to pull it out and put everything into one day. You can do six months preparing the same way but then something like a possible tsunami happens and you have to go back to what you used to do and be ready for that one day,” says the Colombian who crashed a few weeks ago during training and was awarded a ‘10’ for his performance in the final round, “in the take-off, I felt really, really good and as I came out of the water, I saw the judges’ scores and, yeah, that was just how it felt. I am happy!” With a margin of 43.1 points, he finished ahead of Russia’s Artem Silchenko and Britain’s 2010 World Series Champion, Gary Hunt, whose loss of momentum may require a trip back to the pool for some fine tuning.

Ever since the first training on Thursday, the chosen dozen of the world’s best cliff divers were carefully watched by the Manu Tara, one of the most important animals on the island and a central character in the Tangata Manu competition. This elegant bird, whose name means ‘lucky’, is rarely seen in this part of the 163 km2 small island and the surprised locals predicted a safe competition. Blessed with traditional rites, the people of Rapa Nui, who arrived on horses, bikes and boats to watch the first ever cliff diving competition on Easter Island soil, got to witness 45 three-second flights – the new competition format asking each diver to perform four dives – into the Pacific Ocean at Mataveri Otay Bay. 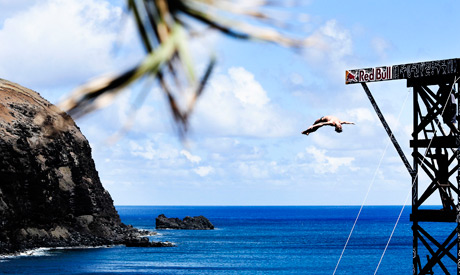 Paying homage to the diverse ethnic culture and beliefs, history and environment, the first stop in the 2011 World Series in the farthest reaches of the world showed once more that consistency is a crucial factor for success. The rookies who qualified for the Series in January celebrated their debuts with seventh, eighth and 10th places. They were led by a Series diver who had to compete in qualification as well after a rather moderate 2010 season, Cyrille Oumedjkane. The Frenchman impressed, finishing sixth in Chile and illustrating just how interesting the third season could become. How much this first meeting of the world’s best high diving athletes will tell us about what is in store for 2011 will be revealed at the second stop in Yucatán, Mexico, on April 10.

Between March and September, the world’s best high divers fight for the title of World Series champion in seven challenging competitions. For the breathtaking three-second flights between take-off and hitting the water smoothly from a height of at least 26.5 metres, extraordinary natural and demanding urban venues have been chosen: kicking off in March in Rapa Nui (CHI), the World Series returns to Mexico (Yucatán) in April.

The first competition on European soil takes place in Greece (Athens) in May, followed by France (La Rochelle) and Italy (Malcesine) in successive months. After a trip to the United States (Boston) in August, the grand final is hosted by the Ukraine (Yalta) on September 4.

Red Bull Cliff Diving competitions are judged by five international judges with scores awarded according to the degree of difficulty and execution of the dive.

More information can be found over at www.redbullcliffdiving.com