For the 3rd time in recent years San Teodoro has been animated by kites and sails, flying like coloured butterfly wings in the spectacular Sardinian wind.
As the name suggests – in Italian ‘E…vento’ is a pun between the words ‘evento’ (event) and ‘vento’ (wind) – the contest mainly involves air-powered sports: kitesurfing and windsurfing.

In the Mediterranean context, internationally famed for its sea and weather, one of the most important Italian wind contests has held a well organised ‘Surf Village’, which offered an ample choice of entertainment and the opportunity for neophytes and sports fans to try the new sports collections and the news in the market of energetic products.

During the show breathtaking acrobatic performances by pro athletes of the calibre of Rubent Lenten and Lex Dekker caught everyone’s attention, gluing their eyes to the jumping boards. The Kitesurfing contest was divided into two categories: Long Distance, similar to a speed regatta,  and Freestyle Best Trick,  probably the most winning in terms of spectacle, where the women took the lead with spectacular tricks.

The youngest rider of the contest was Gabriele Garofalo, a new brilliant name of the Italian kitesurfing panorama. For Gabriele, a 15 year old rider, this is the first contest after just one year of training and he’s already sponsored by an international brand such as Tonino Lamborghini.
After the contest everyone enjoyed a big party with a lively djset, BMX freestyle and breakdance shows. 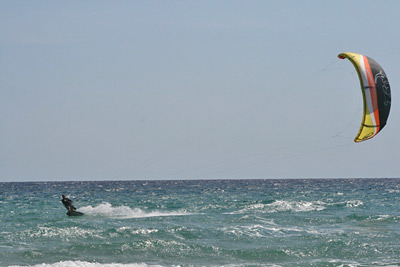