May 2009, Montpellier – France.
France. Same kms. far from home, same perfect location, same canal, partly swampy partly not, same sun, same and much more audience, same and much more enthusiasm, explosive, riders without equals.
The best bmxers, some of the best mtb riders and the new generations friendly challenging, the youngest electrified as hanging to the electric threads. A very terrific movie to watch again for ages, voice exhausted to push the riders flying higher and higher, faster and faster, going bigger and bigger, and more.
Martians landed on earth to conquer us all. We knew it would have happened, but we could have never expected it so early and suddenly. And it was easy like riding in manual, taking us with them on their bmxs and mountain bikes, in park, on more than 3 mts. high dirt kicks, while we pleaded them not to stop, to rock us again and again and again and again, folded and adrenalinic like being punched in the stomach at every trick. A profusion of look back, rains of invert, 360 galore, back flips like swimming with dolphins, riders happily walking on quarters walls perpendicular to our heads and spinning to the spine or the step up in whip to whips, triple tailwhips, frontflips no hands, superman flips ( be sure that human and mortal beings were not present on stage! ), new variants of 720, road gaps, drops into 10 mts roll-in crying like Sandokan, fainted riders in the air trying to please us, dust in the night, sweat in the sun, trails of wind by misterious supersonic beings shooting past at 20 cms from us leaving no way to intercept them until they flew off in 1080 almost made, front flip whips, double back flips. 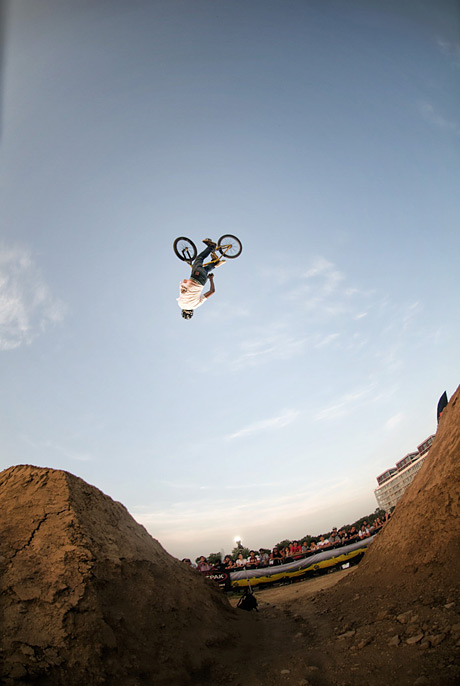 The speaker couldn’t stop crying: ” Ennnormesss!” in his perfect french.
While in the flatland parterre they nearly tiptoed sketching plie’ and chasse’ on the pegs, acrobats damn synchronized to their bikes.
Blasphemous? Us?! We have witnesses! 300.000 witnesses, we are not fool, we’re not lying, we were there free from any synth drug. All the rest means nothing.
They punched up, they hit out wildly to reach the podium, they didn’t spare blood wakes, though reckoning how the wounds hurt later. 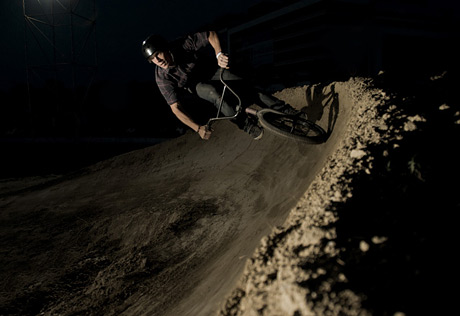 And the Olympus was breached by: 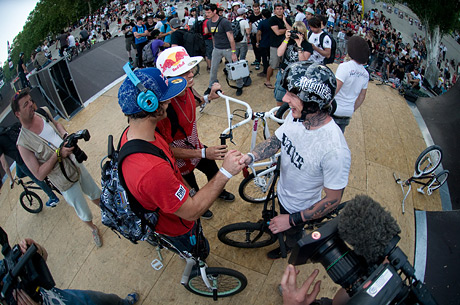 Days leaving a bitter-sweet taste  in our mouths of sensations fully and intensely absorbed in the end, already missing, like at the end of the best concert ever. That now and then you’d want to cry.