Grete Eliassen The American-Norwegian X Gamesgold medallist is a freeskier on a mission: Sochi 2014.

With slopestyle making its Winter Olympics debut in the Russian city of Sochi in 2014, freeskiers everywhere are upping their game. Grete Eliassen is ahead of the curve. Raised in Norway, the 26-year-old returned to the USA, the land of her birth, and the snowy slopes of Salt Lake City, in 2005 to embark on a new way of training. 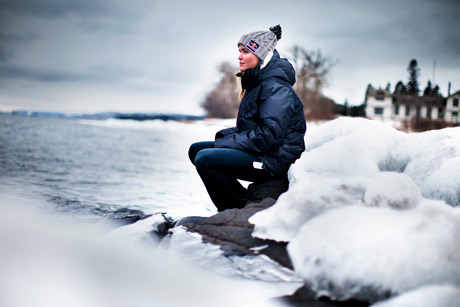 “To be a good freeskier in the past, what you did was ski a lot,” says Eliassen. “But, in recent years, the sport’s really been professionalised; it’s getting more structured. “Slopestyle consists of 15-25m jumps, rails and features called jibs that you do tricks off, so your whole body has to be prepared to take the physical force of all that.

Now, 50 per cent of our training is on snow, 25 per cent is strength and conditioning, and 25 per cent is aerial awareness training on trampolines. But the creativity and freedom of freeskiing is still as strong as ever.” Eliassen also focuses on what she eats, reaping the benefits of getting out of her body what she puts into it.

“I have to be really strict with my diet,” she says. “Over the last couple of years, I’ve been working with a nutritionist from the US ski team and have noticed such a big difference. Getting your own nutritionist is important, as the plan will be very different for each person. I’ll eat light and snack throughout the day, then at dinner I hammer down the protein, grains and vegetables.”

SEVEN DAYS A WEEK
Three-hour workout daily, including a dynamic warm-up for one hour: bike for 20 minutes, then stretches, using a foam roller on the muscles before and after, which helps reduce lactic acid build-up.

TUESDAY, THURSDAY
Cardio/core: After the warm-up, a bike session in two-hour intervals, in the gym or outdoors.
“Running isn’t good for me and my knees, as I’m already doing so much impact skiing, so I stick to my bike. The intervals get my heart rate up above 180bpm.
That is high, considering I’m not an endurance athlete, but it helps at times when I’ve just finished a run and I need to get back up and do it again.”

SATURDAY, SUNDAY
Two-hour hike or swim.“At the weekend, I try to keep it mellow and go for something easier.” 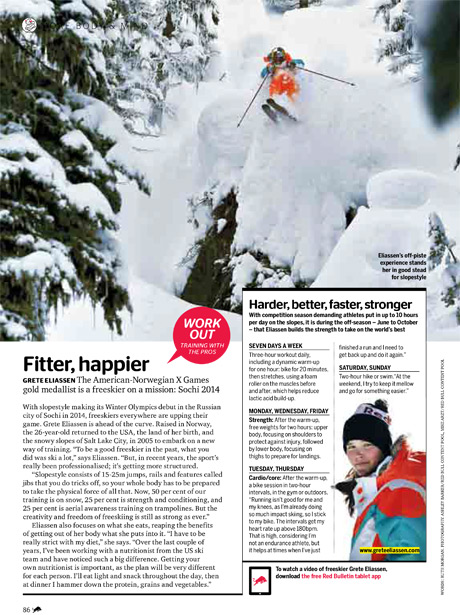 Visit www.redbulletin.com to read the full feature and to download the Red Bulletin iPad app for free, for more sports, culture and lifestyle content.