With the most of the off-season behind us, it’s time for Saalfelden Leogang to once again break the status quo. The new mountain bike season will kick off next week in the heart of the Austrian Alps with the first 2014 FMB World Tour event – the legendary White Style. Riders will gather for the first time this year in Leogang on February 14th to shred the snowy slopestyle course. 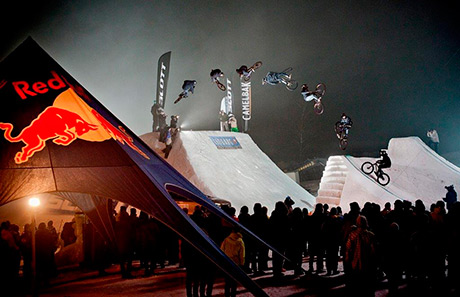 The beaming floodlights will light up the big jumps, made from snow. With 20 of the world’s most skilled mountain bike freeriders on site – the spectators and fans will make the surrounding mountains tremble in the wake of the action ahead. White Style, that’s right, the unique wintertime slopestyle event is taking place on February 14th. Leaving nothing more to be desired – the event is the perfect attraction for freeride-lovers during off-season. 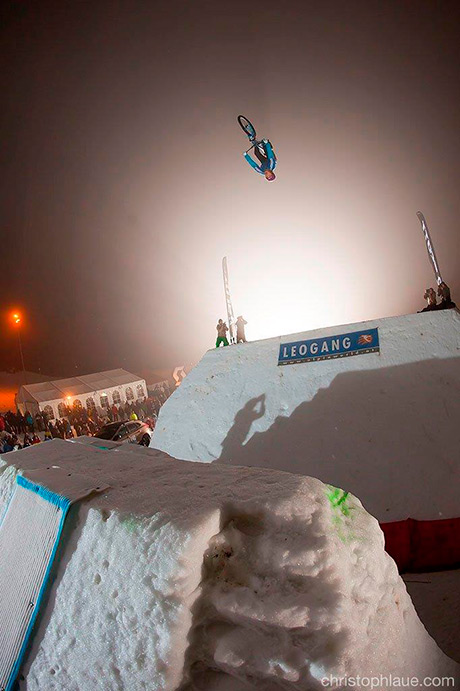 The course build is ploughing ahead with master shaper, Markus Hampl and his crew. This handful of skilled builders are responsible for getting the massive course at Leogang’s Schanteilift dialed to perfection. Their goal: to give the riders as much airtime as possible.
So who is coming to shred some snow? Well, this year the rider line-up includes some of the scene’s topdogs. The French delegation will be sending four riders to the Salzburger Land, including 2012 Red Bull Rampage star, Antoine Bizet. Mehdi Gani, Thomas Lemoine and Louis Reboul will also be making the trip to Saalfelden Leogang. Closer to home, from Germany, Peter Henke, Simon Kirchmann, reigning FMB World Tour AM Champion Steffen Graf as well as young guns Max Mey and Nico Scholze will be attending White Style and the Austrian honor will be defended by Eric Walenta. High flyers, Daryl Brown and Matt Jones will be the hailing the British flag. Red Bull athletes Anton Thelander from Sweden and Szymon Godziek (POL) have also confirmed their attendance. Of course, last year’s runner up, Adrian Tell (NOR) will be bringing his Cashroll’s and front flip no-handers for another shot at victory. From across the pond we will see rookie and BMX-rider Nicholi Rogatkin (USA) in action. 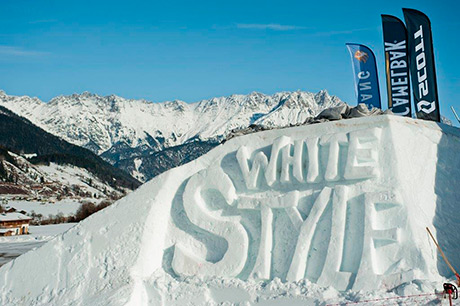 After a practice day on Thursday, February 13th, qualifications will take place the following day on Friday at 4:30pm. The ten best riders will later enter the finals at 8:00pm on the same day. The riders will have two runs to impress the FMBA judges – the better one will count to the final score and hopefully put the athlete on the podium.

Yet, of course what is a season kick off without the appropriate celebrations! The after party will take place from 10:00pm in Leogang’s “Kralleralm”. Come along and meet the riders and celebrate the start of another action packed season!

Take a look at the official teaser and start preparing yourself for the off-season highlight:
[youtube]http://www.youtube.com/watch?v=An8k8ZVxnf0[/youtube]

All the White Style 2014 news can be found on the official Facebook fanpage: www.facebook.com/White.Style.Leogang