The worlds best riders put on a great show last sunday as they tested their skills against freeridings most legendary face, the Bec des Rosses in Verbier, Switzerland. Sunday’s event determined who would ride away with the title of 2011 Freeride World Champion.

In front of 7000 cheering spectators, men and women skiers and snowboarders attacked the steep, 600-meter face in a technical battle that challenged the complete skills of every rider.
Prior to the event, organizers closed the top lookers right of the face due to security reasons. However, several riders used creative line choices to find their way through the labyrinth of rocks, some to access the main cliff that was the key to winning todays event.

Out of the five men skiers who were still in contention for the mens overall ski title, it was Aurélien Ducroz (FRA) who skied the best line of the day with an outstanding run including two massive cliff drops and fast, confident riding on this challenging face. His performance was good enough to win him not only the top spot on the Xtreme podium but also the 2011 Freeride World Champion title. Samuel Anthamatten (SUI) is runner-up World Champion and Dakine rider, Jérémy Prévost (FRA) takes third place overall, for his first season on the Freeride World Tour (after an amazing 2nd place in Verbier) !

Jérémy Prevost : “My goal at the beginning of the season was to reach the top ranking riders allowed to ride the finales here in Verbier. After winning the US stop, I really thought I could reach the top5. As it was my first year on the FWT, I was really excited to meet all the riders, and to learn as much as possible. But results were there, and I really wanted to do something in the Bec des Rosses, that I already rode last year as forerunner. But waiting more than 3 hours at the summit was not easy, and Aurélien really motivated me, and I managed to do the run I had in mind, and it worked pretty well ! I’m so stocked to take the 2nd place on this event, and 3rd place overall, definitly one of the best memory of my life !” 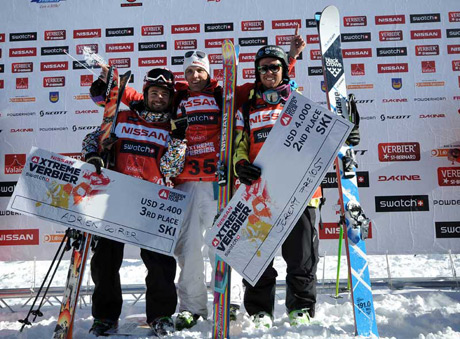 In the mens snowboard division it was the Austrians who dominated the 2011 season. Mitch Toelderer (AUT) charged the mountain, riding well enough to score him the 2011 Freeride World Champion title. Fellow countrymen Flo Orley takes the second spot on the podium after a year of solid performances. Defending three-time Freeride World Champion, Dakine rider Xavier de Le Rue (FRA) won the prestigious Xtreme for an impressive fourth time and placed third overall for the season.

Xavier De Le Rue : “Bec des Rosses is a face that I really like. It’s always stressfull to be at the summit, and there is always new runs to discover. Today for exemple, I rode a new line that I never done before. Winning here is always something incredible, even if my season was not as good as the 3 past one. Congrats to Mitch and Flo for their amazing season!” 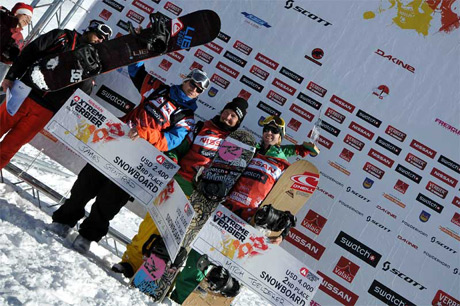 The women skiers stepped up and put on a remarkable show today with the highest level of riding ever seen on the Freeride World Tour. Former Olympic Swedish ski racer Janette Hargin stunned the crowd with a fluid line that included several cleanly landed cliff drops. Her incredible performance earned her todays win and the 2011 Freeride World Champion crown. Angel Collinson (USA), in her rookie year on the tour, took second overall and Janina Kuzma (NZL) is third.

In the womens snowboard category, Dakine rider Anne-Flore Marxer (SUI/FRA), better known for her freestyle skills, won the event as well as the 2011 Freeride World Champion title. And she did all this as a wildcard in her first season on the tour! The overall season rankings were rounded out with Liz Kristoferitsch (AUT) in second and Ursula Wohlschlager (AUT) third. 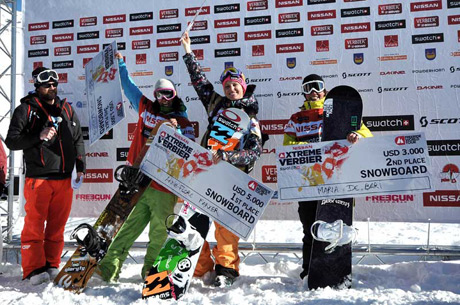 Anne-Flore Marxer : “The Bec des Rosses is by far the most beautiful face and the conditions today were without a doubt the best of the season. It?s important for me to point out that while this face is beautiful it?s far from being easy. I was thinking that I would take a steep line to take speed and jump a lot of cliffs but in the end I decided to be safe partly due to the sluff and hidden rocks. This title makes all my efforts this season worth it. The Freeride World Tour has been a great experience. I can?t wait to come back next year!” 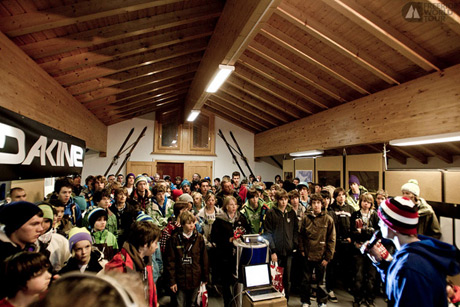 On the Juniors side, kids were again not very lucky. Because of the very bad weather on saturday, they couldn’t compete, and the riding day was planned for sunday, after the main competition. But snow conditions were too dangerous, then the event was finally cancelled… And at the end, it was the best decision, because a huge avalanche happened on the face where the kids were supposed to ride on sunday end of afternoon !
Anyway, despite only one contest happened (Fiberbrunn), the first year of Freeride Juniors was an amazing success !