The Black Yeti will come back again in Monte Bondone, Italy, for the second edition of the Trentino Rookie Fest, the only halfpipe event in the World Rookie Tour 2013.

The event partnered with The legendary Arctic Challenge in Oslo, Norway, which will be an only halfpipe competition for the 2013 edition.

The winner of the Halfpipe in Monte Bondone will be awarded with a wild card for The Arctic Challenge to compete in one of the most exclusive event on the planet. 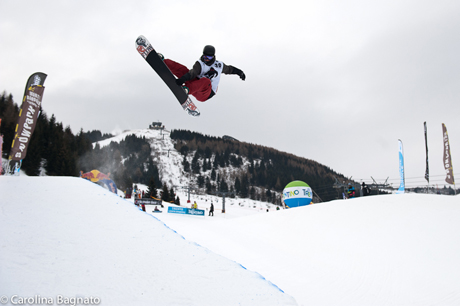 “Rookies are an important factor for progression! TAC has always looked for the new hopefuls and has an history of many rookies that are big names today such as Eero Ettala, Kazu Kokubo, Mattieu Crepel and Shaun White” said Terje Haakonsen, snowboard legend and founder of The Arctic Challenge. “The rookie level is very high today and Rookie Fests have also sent already in the past some very talented guys who have done well at TAC.” Terje concluded.

The program of 2013 Trentino Rookie Fest includes an Half Pipe contest for the TTR World Snowboard Tour,  a night session and many lifestyle activities such as a visit to the city of Trento, film premiere about the Australia Rookie Trip 2012, a night walk in the forest around Monte Bondone and a final party.

The Trentino Rookie Fest will offer the chance to climb the World Rookie Rank and to compete with some of the best Halfpipe young riders of the Alps. 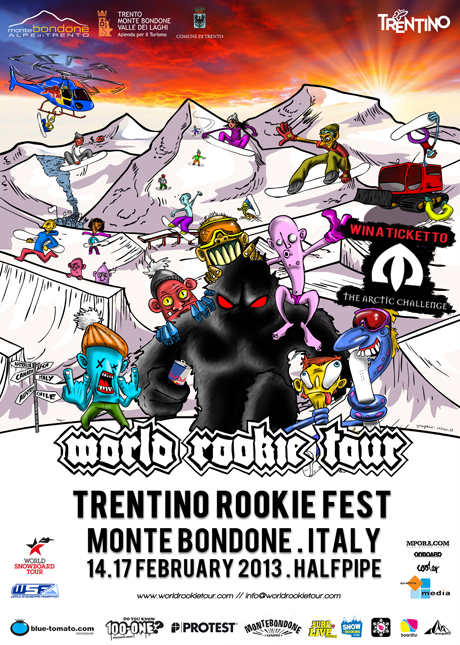 Goodies offered by the sponsor Blue-Tomato and 100-one.

All the podium riders will be qualified for the Volkl World Rookie Finals 2013 inIschgl, Austria

The Trentino Rookie Fest in Monte Bondone, Italy, is organized by the World Snowboard Federation in collaboration with Board Riders, and it was made possible by TRENTINO, Trento Funivie, APT Trento Monte Bondone e Valle dei Laghi, Blue-Tomato, Protest Boardwear, FSI, energized by REDBULL, supported by Tech Riders. You can follow the Trentino Rookie Fest on our international media partners Onboard European Snowboard magazine, Cooler, MPora and on our italian media partners Snowpark.it, EN3 Snowboard Magazine and Board.tv.

If you dream to become a professional snowboarder your future starts at the World Rookie Tour!

ABOUT WORLD SNOWBOARD FEDERATION
The World Snowboard Federation (WSF) is the international organization exclusively working to develop the sport of snowboarding at all levels. Program areas include: competitions, Para-Snowboard, judge and shapers, education and certification, and snowboard activities for riders of every age.  The WSF represents a network of National Snowboard Associations (NSAs) who work together at a worldwide level to promote the development of snowboarding. NSA members can find a source of inspiration and support from the WSF for the activities they are conducting within their nation and by working towards the same goal: progression of snowboarding from the ground up. The WSF collaborates with the TTR Pro Snowboarding, the owner and operator of the TTR World Snowboard Tour and the TTR World Ranking System. Through this collaboration and coordination of events at the TTR World Snowboard Tour, The WSF and the TTR want to create an environment that fosters the development of competitive snowboarding.  In February 2012, the WSF and the TTR hosted the inaugural World Snowboarding Championships in Oslo, Norway, an elite level event to be held every four years in alternating cities around the world.
Official website: www.worldsnowboardfederation.org