Iuter was born more then six years ago, as a snowboard crew of friends: weekend after weekend the crew was growing as we were riding everywhere in Italy and Europe, making troubles on the way!

Now iuter is a strong clothing brand, but at the same time it’s still a very big crew of friends.
To be true to our roots, last year Giacomo Kratter decided to organize this meeting, this contest, something that didn’t exist yet. Well, to be honest we took the name from the Grenade Games, but for all the rest it’s our own work! This year edition was incredible, not just for the spring, hot weather.

The format is pretty simple: no schedules, no riders lists, no timables: we were snowboarding all together in Bardonecchia olimpic park, hitting rails and jumping from kickers to a pipe ride. The riders themselves were judging each other, getting 50 Iueteuro for each good trick, for a total price of 3.000 euro (yes, real money!). The riding itself was amazing: Giorgio Ciancaleoni, Stefano Munari and Lorenzo Buzzoni with his bs1080 were going higher then anybody else in the halfpipe, while on kickers Zeman’s fs3 stale was full of style, and Lorenzo Buzzoni in fs7indy, Nik Borella in cab9 and Max Stampfl in bs9 were going tech, just as Tato Chiala corked bs5. 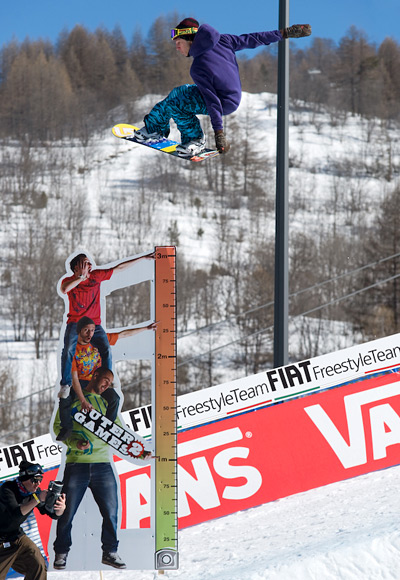 What I really appreciated was to see the best italian snowboarders ride together with the kids, having fun and still pushing each other to gain better tricks. As I said, riding level was quite insane, and I’ve never seen so many people ride together in an italian park before.

And of course there was going to be a party later that night! Andrea Rock from Virgin Radio and Rock TV was warming the dancefloor with some good rock n roll for Reset!: Mace, Rocoe, a3c and Zizzed were arousing the crowd with their electromusic and everybody was mutating in american gladiators!
I just want to say Thank You to all the people that showed up, to the whole Iuter Clan, to the new kids coming out, to Vans and FIAT Freestyle Team, who supported us even if we’re not doing things in the regular way, and the boys and girls at Centoeventi and Facciosnao for the big help.