The first watch in Suunto’s new World Collection is named after Mount Kailash, the revered holy mountain in Tibet. So sacred is it to four Asian religions that climbing it is off limits. Yet, Kailash mysteriously calls people to it from all over the world. No one who answers the call returns the same. By Josh Gale

“If we conquer this mountain, then we conquer something in people’s souls,” Messner said in 2001 when asked about a Spanish team’s plan to climb it. “I would suggest they go and climb something a little harder. Kailash is not so high and not so hard.”

After protest from mountaineers around the world, the Spanish climbers abandoned the plan. The Chinese administration got the message and banned any future attempts.

Messner, who has twice trekked around it, is right. At 6, 638 m, Kailash is minor compared to the giants of the Himalaya. In terms of technical difficulty, there are more challenging mountains to climb. 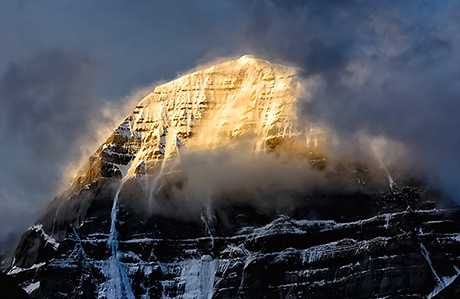 “KAILASH IS ABOUT THE JOURNEY AND OPENING YOURSELF TO NEW PERSPECTIVES.”

For the followers of four of Asia’s great religions, Buddhism, Jainism, Hinduism and Bon, Kailash is the centre of the universe, the seat of all spiritual power, the summer residence of Shiva and home to the Buddha of supreme bliss. It’s not something to conquer. It’s a symbol of transcendence. To climb it would be to profane what is sacred to millions.

“For all mountaineers who appreciate the mountains of the Himalaya, we feel a special connection to the people there, and for them Kailash is the head mountain and the centre of all the religions,” says Suunto ambassador Kilian Jornet. “We don’t climb it out of respect for them.”

Besides, not all adventures are about getting to the top, he says. “The summit of Kailash is not as interesting as the amazing journey pilgrims make there,” Jornet says. “Kailash is about the journey and opening yourself to new perspectives.” 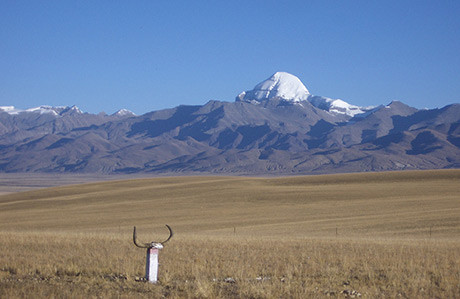 In a tradition that began in the distant past, thousands of pilgrims travel to Kailash each year to complete a “kora”; walking 52 km around its base. Tibetans believe it takes seven lifetimes to accumulate enough merit for the right to travel there. Some pilgrims drop to the ground and offer body length prostrations each step of the way in a deeply devoted act of prayer and submission. Each kora, it’s believed, amasses good karma and blessings.

“THERE’S AN ATTRACTION TO THIS PLACE COMING FROM THE HEART.”

Located in a remote area of west Tibet, near the border of Nepal and India, Kailash is about a 1200 km from Lhasa, the administrative capital of Tibet. It’s about 800 km from the border to Nepal. It takes between two to five days to drive there.

As the region has opened and as word about and images of the incredible pyramid-shaped mountain have got out, adventurers, trekkers, spiritual seekers and devotees of the various faiths have begun travelling there from all corners of the world. Some keep returning, again and again. 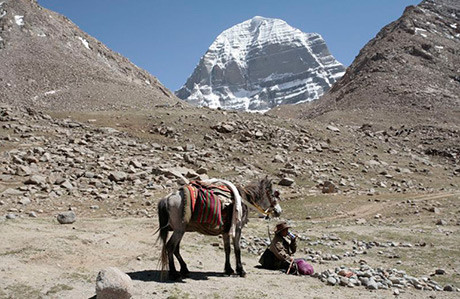 Markus Person, for example, has walked around the sacred mountain 20 times. He hasn’t been there for two years and says he now understands what homesickness really means.

“Mount Kailash is one of the most auspicious, powerful places you can be,” Person says. “But I can’t tell you why. I’m not a Buddhist or a Hindhu, but there is an attraction to this place coming from the heart.”

Person grew up in a small village in the mountains of Germany’s Black Forest. Wandering the hills and forests has always been a cherished part of his life.

Back in 2000, he was a managing director of an IT company, earning good money and enjoying worldly success. But something else began calling him – a powerful desire to travel and explore. Annual trekking vacations to Asia weren’t enough to satisfy it. A three-month sabbatical wasn’t either. After two years, he could no longer ignore the call.

He and his wife quit their jobs in 2002, put the contents of their apartment into storage and bought one-way tickets to Tibet. 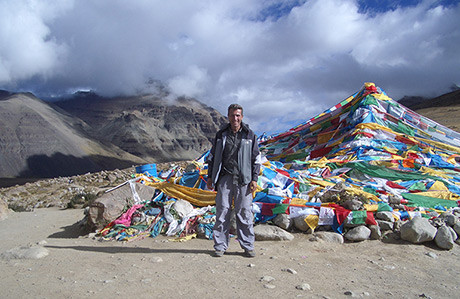 “IT WAS A VERY DEEP LONGING I CARRIED WITHIN MYSELF.”

“It’s what I always dreamed of,” Person says. “Just packing the rucksack and travelling without a final destination and a limited time window. “It was a very deep longing I carried within myself.”

It wasn’t until he and his wife were travelling that they heard about Kailash. They met people in Lhasa who were planning to go there and were convinced to make it a “side excursion”.

“I had no idea what it was about until I walked around the mountain for the first time,” he says. “I only realised how lucky I was afterwards.”

“The kora opens your perception, changes the way you look at and appreciate life.”

After Kailash, Person continued his adventures and eventually all of his travelling and trekking experience led to him landing a job as a tour guide. In 2005, he made an acquaintance who runs Snow Jewel, a business leading tours to Kailash and other destinations in Tibet. The two became friends and Person began leading trekking tours to Kailash. Since, he has completed 20 koras, 12 of them as a guide. 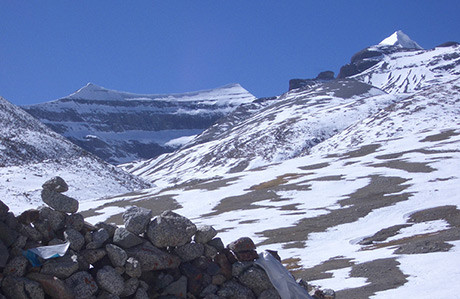 “KAILASH IS LIKE A GURU; EVERYTIME YOU GO, THERE IS ANOTHER LESSON YOU LEARN”

From one perspective the 52 km trek around the mountain is easy. Many people complete it in a day. Some jog around it. From another perspective, however, it’s anything but easy. The altitude of 5000 m can cause headaches and sickness. The harsh environment, cold temperatures and sleeping in tents with strangers can take their toll.

“There’re guys who think it’s no big deal and arrive all cocky, but then they get into some kind of emotional loop with their fears, and some turn back often for silly reasons that only existed in their minds,” Person says. “If there’s no space for humility, the mountain will show you who’s boss.

“Kailash is like a guru; everyone time you go, there is another lesson you learn, another obstacle that gets removed from your way to finding your inner truth.”

Person has witnessed a Chinese girl with one lung complete a kora after doctors had told her it would kill her. He’s seen housewives with no background in the outdoors do it because they have a strong, inexplicable desire. He’s also seen grown men break down and weep. All of them had one thing in common; they had reached an important junction in their lives and at that time Kailash mysteriously called to them.

“There’s a deep fascination with the mountain and you don’t know why, you just feel it and know it in your heart,” Person says. “There’s a driving power inside us which we can either supress or follow.

“Anyone who goes to Kailash never returns the same.”