The verdict has fallen: at the grand finale of the Red Bull Station Riots in Snowpark Nesselwang Belgian street shredder Kevin Trammer could claim the dominance of the Hood for his own. He convinced the crowd and judges not only with his skills, especially with his Switch Hardway FS 270 to Regular at the Police Station, but also with an immense dose of style. The runner-up from the Qualifier Event, Ziga Rakovec was sentenced to second place by the street snowboarding court again. Simon Pircher from Tirol proved to be the most supreme among the representatives of the German urban snowboard scene and secured the third spot on the podium with his line. 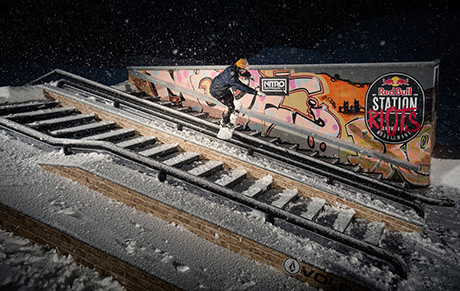 The who is who of street snowboarding shook hands at the Snowpark Nesselwang to convince the judges with their criminal lines and to snatch the title “King of the Hood” last Saturday. Not only the final evening, but the whole weekend through the new generation of snowboarding sprayed it ́s energetic vibes all over the Snowpark Nesselwang. Whether during early morning training laps or at night film sessions, the tight-knit troup was on fire! The strong international starter field surrounding Max Zebe (ITA), Dylan Alito (USA), Ozzy Henning (USA), Len Jørgensen (NOR) or Jesse Augustinus (NED) battled with the six winners of the qualifying events and Erik Harc, the winner of the GoPro video qualifier wildcard. The final line, consisting of the infamous Snowpark Nesselwang obstacles like the Stairset, the Grass Box as a redirect wallride, the fired Trannyfinder rail and Police Station were shredded with every trick in the book. No doubt that with this setup, despite, or maybe even because of the onsetting heavy snowfalls the spectators got their bang for the buck.

In the end ofcourse there can only be one winner and he goes by the name of Kevin Trammer. The Belgian impressed with the most criminal line of the Hood. Kevin ́s run definitely can be put in an appearance: Halfcab Nosepress FS 180 out – BS 180 Switch Nosepress 180 out – Switch Hardway FS 270 to regular. The 21 year old crowd pleaser convinced the judges not only with this more than solid “walk in the park” but also with a good portion of “gangster style”. But the runner-up Ziga Rakovec rocked the Hood with finest technical difficulties such as his Hardway 270 to switch on the Trannyfinder rail. The third spot on the podium went to Simon Pircher from Austria, who thus completes the winning gang of the Red Bull Station Riots 2016. For the most criminal move of the night Dylan Alito from the United States took the “GoPro Best Trick” award with a 50-50 frontside 360 out over the high rail of the Police Station.
Check out the video of the winner runs on redbull.com/stationriots.

But all other shredders at the Red Bull Station Riots final event got what they were in for, because apart from the contest Line the park was open all day long for every visitor. Therefore the Nitro rental test booth right next to the entrance of Alpspitzbahn was the ideal opportunity to arm yourself with the latest boards for free!

But that was not the last of the ultimate shred weekend in Nesselwang. The final bangers were to be local hero DJ Mittone and the eccentric Turntable Hools right after the contest at the aftershow party in the beer hall of the old Postbrauerei. The “hools of the turntable” happened to be the predicted nightmare for all visitors that prefer a contemplative jazz evening rather than party-mayhem.

For further information about the final of the Red Bull Station Riots please vistit redbull.com/stationriots