Aaron Gwin (USA) just crossed the finish line after he had secured the last starting position with the best time in the qualifying and now the winners of the men’s and women’s DH race at the UCI World Cup stop in Leogang are set.

None of the men was able to get close to Gwin’s time (USA/3:44.181) and Floriane Pugin (FRA/4:29.427) finished with a comfortable lead ahead of her competitors. Cheered on by the spectators that had flocked to Saalfelden Leogang despite the changing weather, the athletes showed an absolutely spectacular race. About 13.000 mountain bike fans had come to Leogang on this long World Cup Weekend to attend this international biking highlight.

The DH course in Leogang is famous for its technical sections that demand a great deal of concentration and skill of the riders. Especially the last passage with its roots made slippery from the rain posed quite a challenge for the riders. The track that measures 2.600 meters and stretches over 830 altitude meters, was a lot faster than last year, even though the mud did its part to slow the riders down. 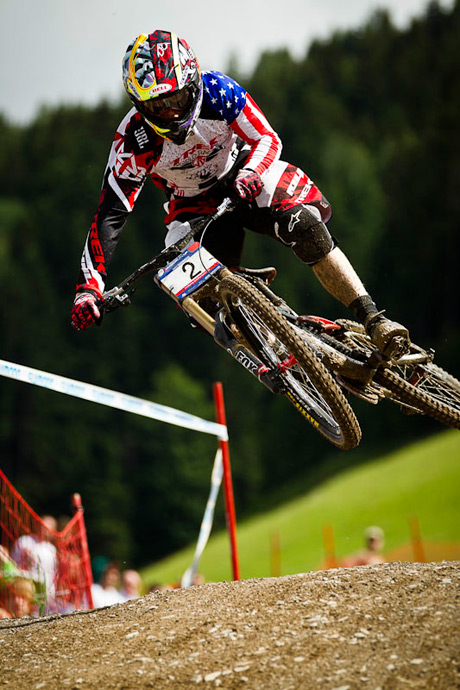 The Sunday afternoon was rung in by the ladies’ DH finals. Even though the race itself took place in dry weather, the course was soft from the rain that had come down in buckets and especially the root section posed quite a challenge for many of the ladies, as well as the following men’s race. Floriane Pugin (FRA) delivered a truly impressive run and overtook with her time of 4:29.427 the two British ladies Rachel Atherton (2. Platz/4:32.010) and Tracey Moseley (3. Platz/4:32.119). She won her first World Cup stop with a large margin of over two seconds.

The race remained exciting until the very end since the ladies kept switching position on the hot seat. Particularly the last three starters each took the coveted seat and had to turn it over again after the next run. The winner of the last World Cup stop in Ft. William, Tracy Moseley, surely wasn’t happy to hand over the hot seat to Rachel Atherton, who then had to vacate the first for the last starter. Austrian World Cup hope Petra Bernhard came in on sixth place and climbed up to number nine in the overall ranking. 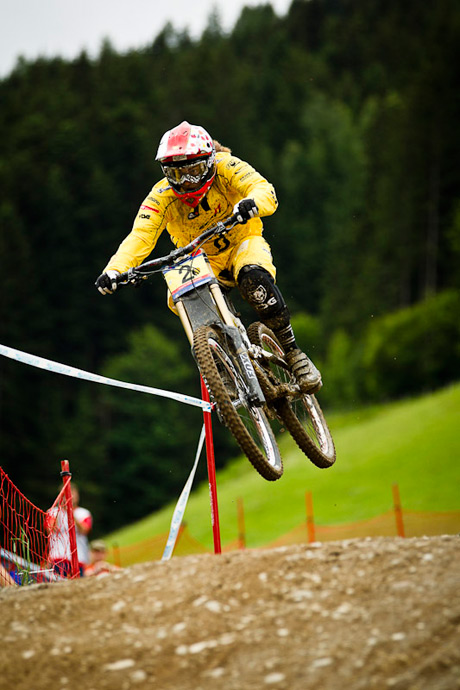 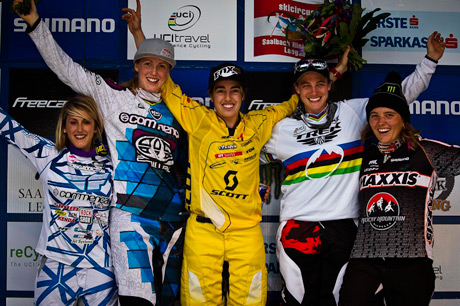 Right after the women’s race, the men’s DH finals made the spectators hold their breath in excitement at a truly thrilling race. The Austrian spectators were more than riveted to see Austrian Markus Pekoll take the lead early in the race. He was able to hold this position for several runs until he had to give up the hot seat for Brook MacDonald (NZL/3:54.796). Pekoll came in on the 16th position. Then it looked as though Steve Peat would take the lead but he lost his line and had to be satisfied with the 12th position (3:58.984). At the first split, multiple DH World Champion Sam Hill (AUS/3:53.406) was already two seconds faster than MacDonald and forced him to vacate the seat. In the meantime, Cedric Gracia (FRA) just missed the hot seat with a very fast time and was sitting in second position next to Sam Hill for a while. In the end, Gracia placed 6th – his best World Cup result in the past few years. However, Hill’s lead was not solid enough for him to relax on the hot seat.

After the run of last year’s winner in Leogang Greg Minnaar (RSA/3:49.902), the time had come for Hill to move since an impressive lead of almost four seconds meant Minnaar moved to the top. Fabien Barel (FRA) lost valuable time when he crashed, proving once again that the course is no eas task even for the absolute superstars of the scene. After Minnaar had taken the lead with such a comfortable margin, many already saw him on top of the podium but Gee Atherton was able to beat the incredible time by another 3 seconds. The fastest in qualifying Aaron Gwin (USA/3:44.181) was good for another surprise at the very end of the contest and came in at an unbelievable two seconds faster than Atherton in a race that could not have been more exciting. 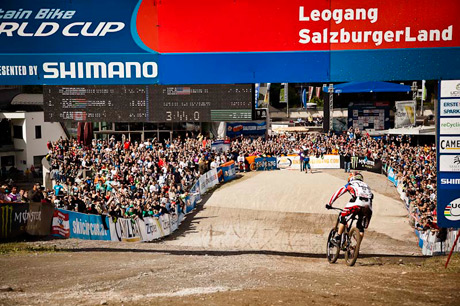 You can find the latest updates on the official facebook fanpage of the UCI World Cups in Leogang: https://www.facebook.com/pages/UCI-MountainBike-World-Cup-Leogang/107748589268936

More information can be found on the homepage of the Out of Bounds Festival: www.outofbounds.at

Story and Photos courtesy of Rasoulution.