Last sunday saw the final stop of the UCI Mountain Bike Downhill World Cup and a piece of history in mountain biking. In probably one of the most thrilling Downhill World Cup finals of all times, Steve Smith could beat his hardest rival Gee Atherton. As champion of Saalfelden Leogang he ends his season also as overall world cup winner, followed by Gee Atherton who finished fourth today. In the women’s competition French rider Emmeline Ragot came in first, but couldn’t avoid the overall world cup title for Rachel Atherton, who finished second in Bikepark Leogang. 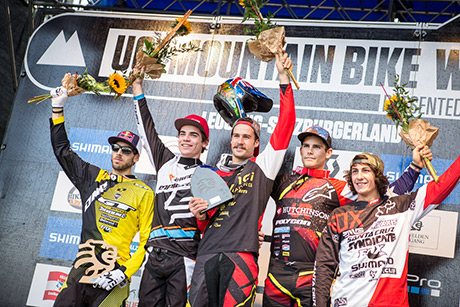 It was a season showdown that will enter the annals of mountain bike chronicles. The last stop of the UCI Mountain Bike World Cup in Saalfelden Leogang was really suspense-packed. In the men elite’s overall ranking British rider Gee Atherton was in the lead before Canadian Steve Smith with only 17 points. It seemed obvious that the form of the day and a bit of luck would be the decision maker about who will take home the overall world cup title. In the women’s competition things were a bit more clear, but the title was not yet determined: Rachel Atherton was in the lead with 160 points before second-placed Emmeline Ragot. But a French triumph was still possible, since a world cup win scores 200 points. 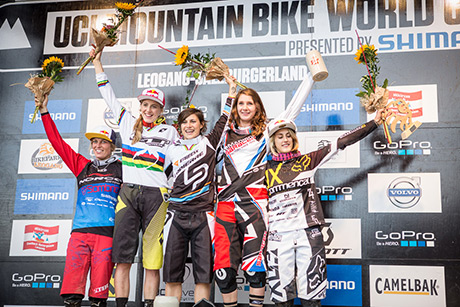 And Ragot fought for the title. In best shape she threw down an almost perfect run on the 2.6 km long track, pushing French Manon Carpenter (in the end rank 3) from the hot seat by over 4 seconds. Now, the pressure was on Rachel Atherton, last female rider of the day. After the first time split she was 0.3 seconds in the lead and everybody was expecting another Atherton victory. In the end Rachel Atherton took second place and was 0.5 seconds slower than Ragot. But that didn’t diminish Rachel’s happiness about her overall world cup title: “That was definitively the best season of my career so far. After the World Championship title now the World Cup overall title, I still can’t believe it. For now I am just happy! But congrats also to Emmeline, who showed a brilliant performance today!” 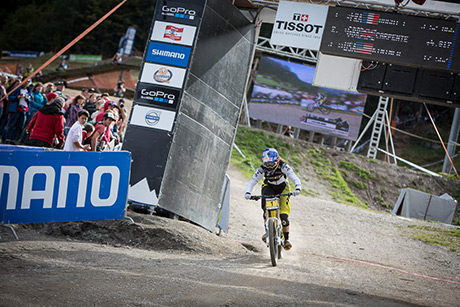 Subsequent to the women’s final it came to the final showdown of the male downhillers: the expected clash between Gee Atherton and Steve Smith. It couldn’t have been more exciting. Just before Atherton’s run it was French Loic Bruni who placed himself on the hot seat with an incredible aggressive performance on the track. He beat the so far leading time of Josh Bryceland (GBR) by 4 seconds. So it was up to Gee Atherton to safe his title. He found a quite flowy line, but in the end couldn’t beat Bruni’s run, so he ranked in second behind the French young gun. The pressure on Steve Smith now even got higher when Mick Hannah from Australia finished half a second faster than Gee Atherton. In the last run of the day, Smith went for the greatest triumph of his career. Precise and error-free he found his line and shredded down the top section of the track incredibly fast. After the first time split he was already in the lead and didn’t give it out of his hands. Finishing as fastest rider, it was clear that he would also grab the overall world cup crown.
Steve Smith’s comment on his win: “I really felt the pressure on me. At the start I was quite nervous, but then on the track I felt good, especially in the upper section. Then it got louder and louder around the track and I just kept going. When I heard people cheering behind the finish line, I knew I made it!” 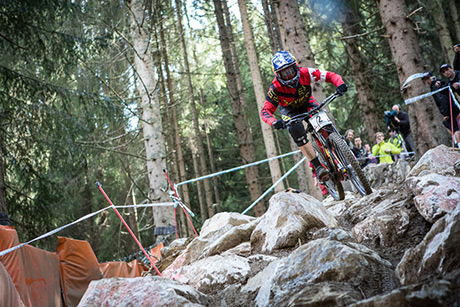 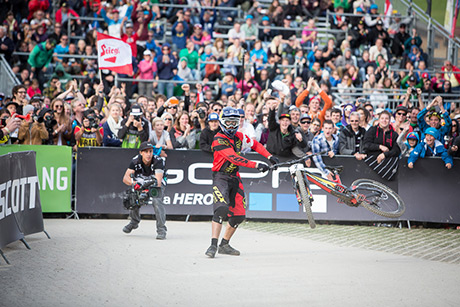 Despite a great season performance Gee Atherton had to leave Saalfelden Leogang as second in the world cup overall and with a fourth place in Saalfelden Leogang’s world cup race. Not enough for his ambitions, but in half a year he will get the chance for revenge.
Also worthwhile to mention is the 9th place of downhill legend Steve Peat. In the age of 39 he proved that he is still able to compete with the absolute downhill world elite. In front of 10,000 cheering spectators he visibly celebrated his top 10 placing. 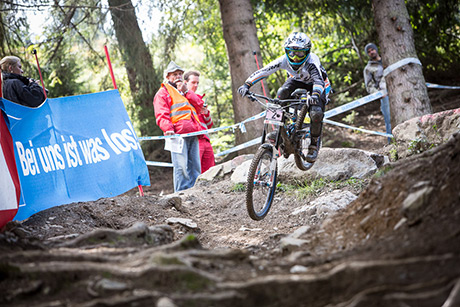 In the men junior’s competition Swiss rider Noel Niederberger, who already was fastest in the qualification runs, took the win before his all-season rivals Loris Vergier (FRA) and Michael Jones (GBR). All three were separated by less than 1.5 seconds, another prove for the extreme performance density in the junior men downhill division. However, second place was enough for French Vergier to maintain his overall lead and take home the UCI Mountain Bike Downhill Junior World Cup overall title.

All news about the UCI Mountain Bike Downhill World Cup and the UCI Four-Cross World Championships as well as about biking in Saalfelden Leogang can be found on the new bike channel: http://bike.saalfelden-leogang.com/