Hi Guys, how’s it going? What about the almost finished august? Where have you been?

Hey there. We´re all good. We´ve basically spent the entire month of august sitting in our editing dungeon (aka the office), with the shades closed and the air conditioning on, consuming lots of pizza and redbull and working till 5 AM in front of our computers. My eyes hurt. But we also managed to have some chill time before the editing process which we spent hanging out in beautiful Munich, drinking beers at the river and enjoying the summer.

People can’t wait to see more of Let’s Get Lost, it appears to be a new step further in ISENSEVEN’s unstoppable growth. What can we expect from Let’s Go Get Lost?

As usual, a bunch of dudes acting like children, beer and some snowboarding. But seriously….I think the new movie will be the perfect mix of everything that people love about IsenSeven. There will be more fun snowboarding and goofing around. The intro´s are clever, funny and well  produced . The tricks have gotten better and the music is diverse as always. People that were always screaming for either better tricks, more fun riding or crazier intro’s might be satisfied with this movie. When you watch this movie, you´ll just want to hang out with our retarded riders.

Your video name has always had a story behind it; what is the Let’s Go Get Lost one?

This past season we entered the filming process with much less plans than the years before. We kind of just went wherever it was best and because of that we had some crazy experiences, had awesome (or really shitty) conditions and we also got lost alot. There were alot of spontaneous trips and events we didn´t expect to happen. But all to gether it was a great time, we got some cool shots and it was nice to hang out all season with the guys.

In the last itw on behind you told us you were exploring new territories such as skateboarding and extra-action production..I noticed skateboarding is slowly taking it´s slice in your videos, but for the rest? Will we see the ISEN SEVEN name in the next Tom Cruise film?

For sure not in the next Tom Cruise film. He´s a weirdo. Maybe John Malkovich. We´ve been making snowboard films for 8 years now, and it´s a nice alternative to only filming that white stuff. It keeps you going, gives you motivation and lets you come up with many new ideas. We always have been a snowboard crew and that´s what we do. But we like working in different directions as well. Who knows….maybe we will be working in the movie industry some day. As long as the snowboarding doesn´t come to short. 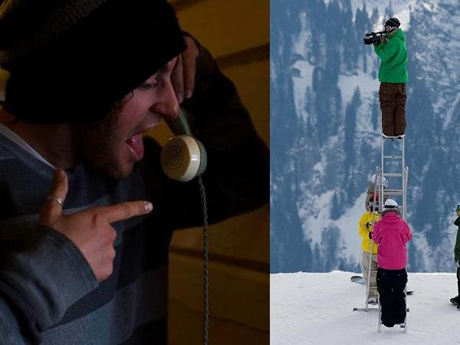 Franz is our best friend. He hangs around the office all day, bothering me to make more t-shirts or stickers with his face on them. He´s such a diva. But we love him cause he´s our lazy mascot.

Despite many other snowboard film productions, it seems you have the ability to show high profile riding but still maintaining a fun atmosphere…how does it come?

We always wanted the viewer to have more than just a movie with a bunch of tricks edited after each other. Snowboarding isn´t ONLY about crazy jumps and gnarly rails. If you go out riding with your friends, you do all kinds of fun stuff, cruising around, jibbing every little bump you can find and fall down and laugh alot. So that´s what we try to show in our movie and I think that´s one reason that so many people can relate to our movies. But of corse we want to show some good tricks and have some creative intro’s. So there´s a little bit of everything for everybody in our films.

Every year you present new riders and sometime some of them get lost! Will Let’s Go Get Lost feature the entire original crew, will not or a mixtape of old and new faces? A new injury filled season?

A few guys from the past years unfortunately couldn´t join us for this project but a big part of the crew is still on board and we have a few new faces. Marc Swoboda and Tom Klocker from Austria, Anton Gunnarson from Sweden and Alex Tank from Germany joined us this year and it´s been an awesome season with them, just like it has been with all the original guys. Sadly Marco Smolla tore his ACL in the beginning of the season again. He´s been out his second year now. A few of the other guys also had some shitty stuff going on with their bodies, but all in all the injuries this season weren´t as bad as the year before. 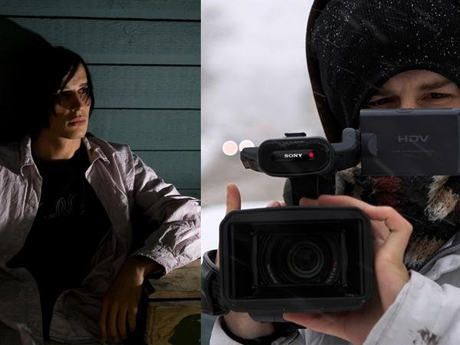 A lot of times it starts out as a coincidence. We´ll be out filming somewhere and we meet a rider who is good and the crew gets along with him well and we´ll start hanging out some more and then maybe he´ll be able to film with us the next year. Or sometimes it´s a long time friend and it just seems like the right thing to do to bring him in to the crew. Like Alex Tank for example. We´ve known him forever and over the last few years he´s gotten pretty good, has nice style and he´s a good friend so we decided to bring him on board. His sponsors we´re cool to support him in our project so everything worked out. Same thing with the other new riders. But yes, the IsenSeven crew is like a tight family. I´ve heard from other film productions that some riders have never met the other riders that also film for the same movie. That could just never happen with us. Most of us also hang out together when we´re not on the mountain.

Having that said, we´re stoked on almost being finished with the movie. We´re getting ready for the crazy premiere tour which will be going on from mid september. If you happen to be in Munich on september 18th you should swing by our premiere. It´s also our ten year anniversary this year so the party is surely gonna be off the hook. Check our website to see if we´ll be coming to show LGGL and party with you in your hometown.