If you still haven’t planned your trip to Vienna, you still won’t have to miss the highlights of the Vienna Air King 2011. Thanks to a high quality live stream presented by Contour that will be embedded on selected websites you won’t even have to leave your couch for excellent bike action, no matter where in the world you are. 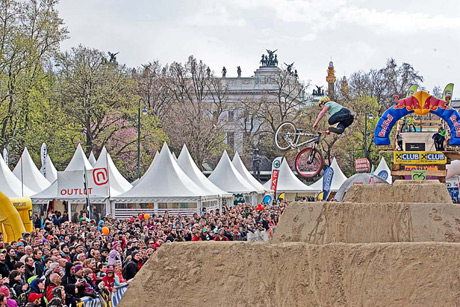 For about 1.5 hours, the program will broadcast live from the finals on Sunday, April 3rd on Vienna’s city square and make sure you won’t miss a single trick or info from the kick-off event of the Freeride Mountain Bike World Tour 2011.

A program of the kind you’ll be able to enjoy on April 3rd is only matched by such events as the Red Bull Rampage or the World Cup. The live stream presented by Contour will be much more elaborate than merely filming the runs; anyone who dials in can enjoy a perfectly rounded-off program. 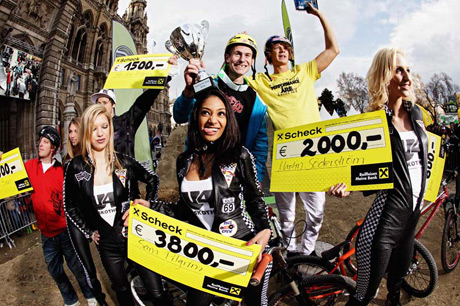 A host will offer commentary on the best tricks and speak to some of the scene’s superstars. After all, when Zink, Lacondeguy, Pilgrim, Granieri & co pull their sickest tricks out of the bag, you want to be as close to the action as possible. And it is impossible to get any closer than you’ll be with the live stream presented by Contour – unless you’re one of the riders.