Lesson number 14, Marco Goes to Japan.
This is a true story. It is the journey he is living from more than a year back and forth and up and down Asia.

In the shade of a Bonsai tree I trace back the Japan Adventure, I scratch my eyes to check if I’m still dreaming…
Dreamland experience, metropolitan tale. It should have been 2 quick weeks, in the end I spent a month and a half in this enchanted world.
Land of samurai, geisha, ninja, sumo fighters, zen Buddhism, yakuza and videogames, I fell in love with japan, I rediscovered the value of friendship and brotherhood, I twisted night and day and I left Tokyo I don’t even know why, a bit like “I leave you ‘cos I love you too much…”

The expectations of japan had been totally fulfilled and they went further, after this journey into the future now it’s hard to go back to the present.
What mostly charmed me about Asia is the juxtaposition between rich and poor, in Japan the axis moved to the dichotomy new-old, leaving somehow equal the balance soul-matter.

Able of terrifiying atrocities in east-Asia during WWII, at home the Kamikaze Japanese are nice, welcoming and cheery, the atmosphere is constantly Truman Show-style: you always feel like everything is too quiet and something is about to happen, old women take their dog out with harrowing calm and the massive politeness sounds like a trap to the gaijin… they find themselves more at ease dealing with robots than with humans, in both cases politeness rules: hundreds of bows and endless greetings for each meeting, that’s why now my back hurts!

The relationship human-robot led to several problems about identity and self-consciousness among themselves and towards the rest of the world; in recent years these humans evolved pretty quickly, whether still difficult to see what’s happened in those brains the Japanese seems to have find their harmonic balance between brains and gigabytes.

Talking toilets with warmed bowl and built in 5 speeds bidet, autobus and vending machines equipped with soul, machines that do everything, just like anime robots each machine has a Japanese inside who control it, cheers and suffers together for good or bad business. Each Japanese indeed is an android: programmed to not fail, maximum efficiency. Jap- Matrioska. 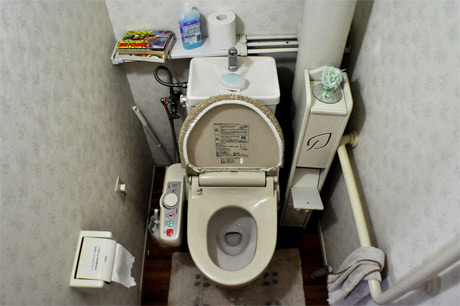 Approach to life is pure Final Fantasy-style, the border between real life/videogame is blurred: the goal in general is get to next level, whichever world it would be. They work a lot, aseptically get drunk and erase themselves in pachinko – slot machines houses – following a monotonous ritual; they buy dreams and services, from love hotels to hostess bar there’s no tabu, but a complicated system of relationships aiming to keep honour clean and tidy.

Report Japan it’s hard because you end up writing usual stereotypes, all of them true, the one we learnt watching Anime cartoons when we were young… to try something new I slide the paper door, enter barefoot in the wooden restaurant, I pass through the eye-level curtains, I sit in front of the chef that welcomes me with a towel on his forehead and close eyes, he starts cooking at supersonic speed sushi, sashimi, tempura and teppanyaki; I place some wasabi on my plate and cheer up with sake and Suntory (the boss of them all) beer and coffee to the story of Japan in music:

“At the edge of the world there’s an island, where the sun rises first, Nippon.

This island has been so remote and untouched for centuries, traditions so rooted and unchanged that when the future approached these shores nobody could tell what exactly happened in the mind of this people, the Japanese, who were able to take the best out of the incoming influences, and shaping it as they wanted; they’ve been able to take the future from outside and make it for themselves, making it part of the thing, making it Japanese.

On this island the future speaks Japanese, the music speak Japanese.
Technology was an alien monster, and they took it and make it speak their language.
In the 21st century in this country tradition and future walk hand in hand, smiling at each other, completing each other.

It’s no surprise to see in Tokyo, the busiest city in the world, a beautiful Japanese girl wearing traditional kimono walking on the street with long hair wrapped on her head, some ciuffo leaning down the neck, and huge headphones on her ears pushing electronic music, giving her tempo and stamina in this chaotic and charming world.

It’s not about showing off, it’s not about fashion, music is rooted in the mind and costumes of the Japanese, and they use technology in a sublime way to enhance the spirit and to make traditions go on, walking towards the future.

When you get to any of the hundreds of metro stations you are welcomed by beautiful melody; when you go to a techno festival you feel the rhythm coming from the ground, and you see people dancing lightly and softly. Politely you walk through the crowd, find your own space where you can dance and express yourself; soon you realize that you are just a part of it, you are building the atmosphere together with thousands of youngsters that truly believe in what they dance, they truly believe in music.

Please don’t talk to anybody, just enjoy the beat and let emotions come first, just like anybody else is doing right here right now.

And when the Dj lift up his almond-shaped eyes from the console and greets the crowd with one hand and a beam of light you scream back with your throat open wide. The Dj gets the answer, we like his music, he can push the edge a bit further.

You walk again, you see crazy people, crazy colors, crazy shapes, and you clearly realize that all this make sense, it’s so beautiful and so powerful, that you feel glad to be one of them for a while; you feel Japanese, you speak the same language, you are the same thing.

This dancefloor is huge, and you can’t stop marveling that everybody is dancing from the first row to the very back; you see light games playing over your head and you are dreaming, you are an alien just landed on a beautiful planet, dwelled by beautiful people.

You wanna make it last as long as possible, you don’t wanna stop dreaming. When you look at somebody’s watch you realize it’s 6am, and the adrenaline is just the same as 12 hours ago. Amazing.

You thank the Dj, the atmosphere, and you feel so lucky to be there.

Then you try to speak to somebody and suddenly you wake up: they don’t speak your language, you are not one of them. But they keep on smiling and bowing at you showing respect, the respect you gained by mixing with strangers and making everybody feel at ease with you, sharing the same experience.

Once you are in Japan you learn how differences makes the difference, and you see how much music is important to our Nippon fellows, expanding your brotherhood to the whole world.

It’s beautiful. I call it the power of music.” 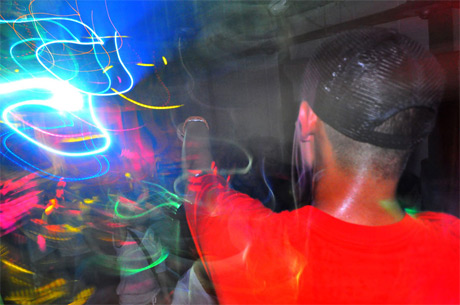 From the outside it might seems foolish, but from inside everything make sense and it couldn’t be different. Marco San learnt how to dialogue with robots and tried to catch their human side, and in the end he made it, he realized that Japanese are not that far from us: they love life and try to improve it day by day, they need to vent out mentally and physically and they feel emotions… maybe in the end they are one step forward in the human evolution process, they are next level human 2.0

Me and my business buddy David crossed an infinite series of events and people, building a puzzle stuck between dream and reality. Cool.

The adventure began in Osaka, where together with local friends we got into night life, then the friends became brothers and we moved out of the city, enjoying a hippie traditional electronic (?) music festival in the middle of a forest up in the mountains, among fire-eaters and synthesizers, wiggly belly-dancers and electric guitars, yo!

Japanese hospitality is amazing, in the end I found myself full of friends and a bit in debt with them, people similar to me who speak like robot, people with my same dreams, bad habits and virtues, just like brothers!

Tokyo has been the apotheosis, Shibuyaaaa, Shibuyaaaaa!Tokyo looks like a huge village: take Hong Kong and Shanghai’ skyscrapers, spread them to the ground, lie them flat and you get Tokyo, where everyday lasts 48 hours.
You can find the calm of a countryside town in a tiny alley, then you turn the corner and you’re in the center of the world, the epicenter to be precise.

We’ve been photographers, models, writers, journalists, fuck-arounders and philosophers; Tokyo’s beau monde in my hand and some silk kimono made my head spin, they almost made me set roots, and I’m still wondering what the hell am I doing in Korea right now…

I look at the calendar and see I got 27 and I spent a month in Tokyo, plus cash flowed out a bit too quick, the stuff is getting out of control…
A Monday morning while our friends are asleep we run away from the center of the world, scared of being sucked in and we hitchhike southbound on the wipeout-style highway like two urban fools. 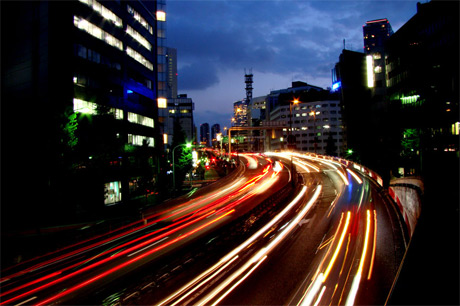 We get to the feet of noble Mt. Fuji a warm afternoon, and like two moron we start hiking up just like it was a shortwalk in a park. I’ll find myself at 10pm struggling like an elephant trying to get to the station at 3000 mt. where to spend the night. It’s impossible, my lungs ask for change after the wild city life and my legs are trembling, two idiots climbing a volcano without water!

I’m about to faint, but the right music on my speakers give me final power and exhausted I get to the top, where I find out that I could have been the 10th man dead on Fuji in 2009! Next morning I enjoy the splendid sunrise and the downhill is a funny sand-boarding in the place where few hours earlier I almost passed away, yo!

In Kyoto I’ve been the man of the protocol and saw some temples of the former capital of Japan, in Hiroshima I paid tribute to Atom Bomb’s human disaster, I realized that the end of the world is not far and anyway I did my good job so far; in the end we will go back to this planet and our ashes will be basis for new life, that’s what we deserve, life is about cycles.

A long breath and a last hitchhike with a madman who drive us to Fukuoka at 2000 km/h on the videogame-highway that winds up like an wild-eyed dragon. The mom of this great guy insist to let us sleep in their humble dwelling and cook for us the most amazing breakfast with rice, fish, eggs, vedges, seeweeds, sausages, bread, butter, jam and fruit… hey where’s my newspaper?

When you wish somebody could stop the time, when you deceive yourself that you keep it in your hand, and you turn around and realize it’s gone, oh time time, how I wish to stop you, how I wish to make you mine forever, ahhhhhhhhhhhhhhhh!

Getting lost is the best way to find your own path.
Story and Pictures by Marco Bagni, http://www.lostconversation.com/