What an event in New Zealand! Crankworx Rotorua Slopestyle in Memory of McGazza kicked off the FMB Diamond Series in style! The best slopestyle athletes in the world dropped into the course a day earlier than planned due to the weather forecasts for Sunday, but they sure did step up! Nicholi Rogatkin (USA) was able to secure his first ever win at Crankworx Rotorua after coming second in the two previous years and he is the first non-Canadian to win the prestigious event. His run convinced fans and judges alike (95.66 score) and he took the first Diamond Series win home ahead of Torquato Testa (ITA, 93.00 score) and Emil Johansson (SWE, 92.00 score). 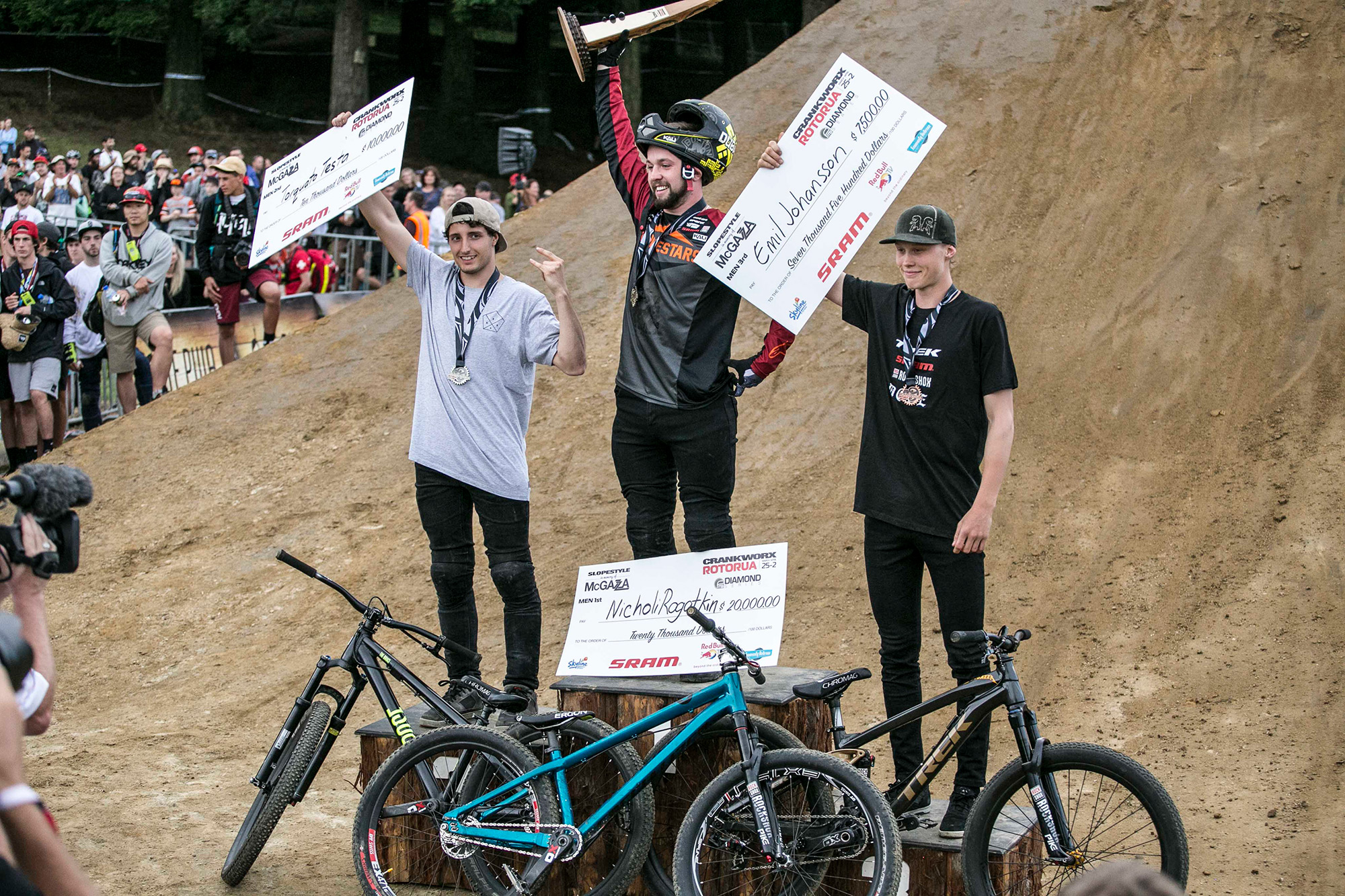 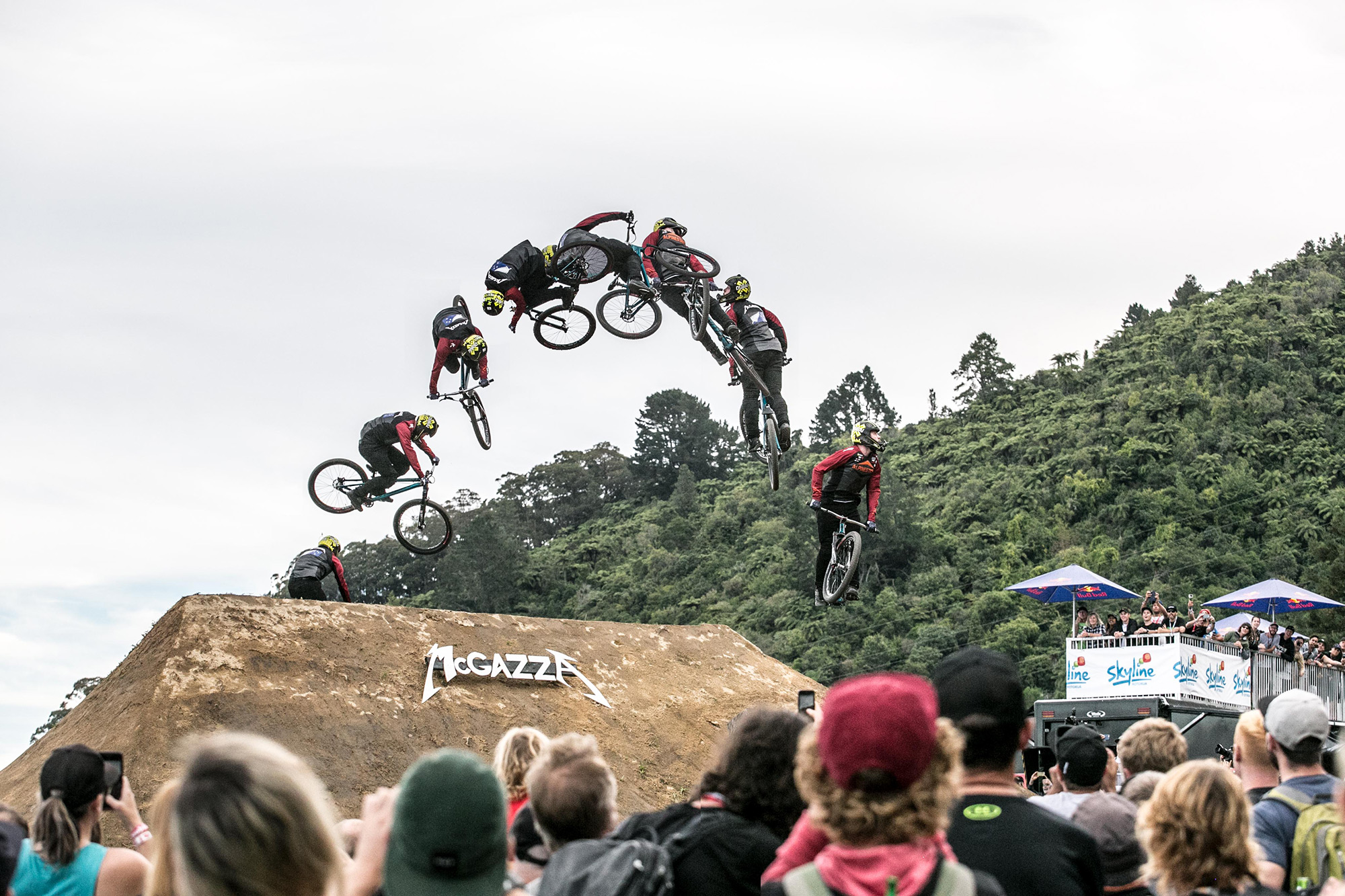 The first run in great weather conditions saw Nicholi Rogatkin steal the show and underline his ambition to defend his FMB World Champion Title this year. The 21-year-old American showed the most spectacular and cleanest run of all the athletes (95.66 score), showcasing the smoothest “Twister” yet. This stellar run put him ahead of Tomas Lemoine (FRA, 90.00 score) and Max Fredriksson (SWE, 88.66 score), who both showed they are in good form to kick off the 2017 FMB Diamond Series season. Anthony Messere (CAN, 87.00 score), Emil Johansson (SWE, 85.33 score) and Logan Peat (CAN, 84.33 score) completed the top 6. “We all had crazy motivation riding for McGazza today. Hearing the crowd when coming down here to the bottom, I just had to stomp that last one. I am just over the moon right now”, commented Nicholi after the score showed on the board. 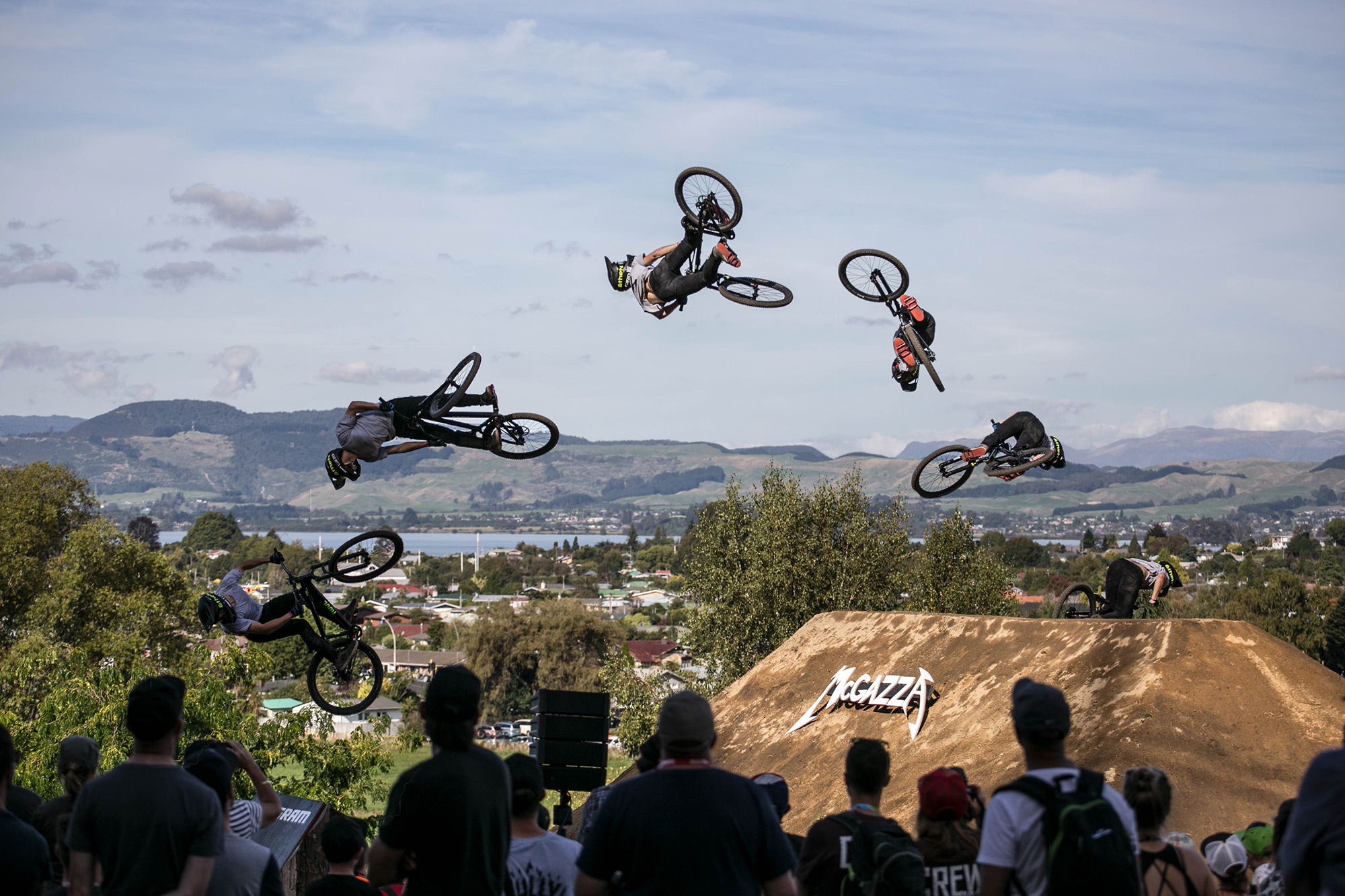 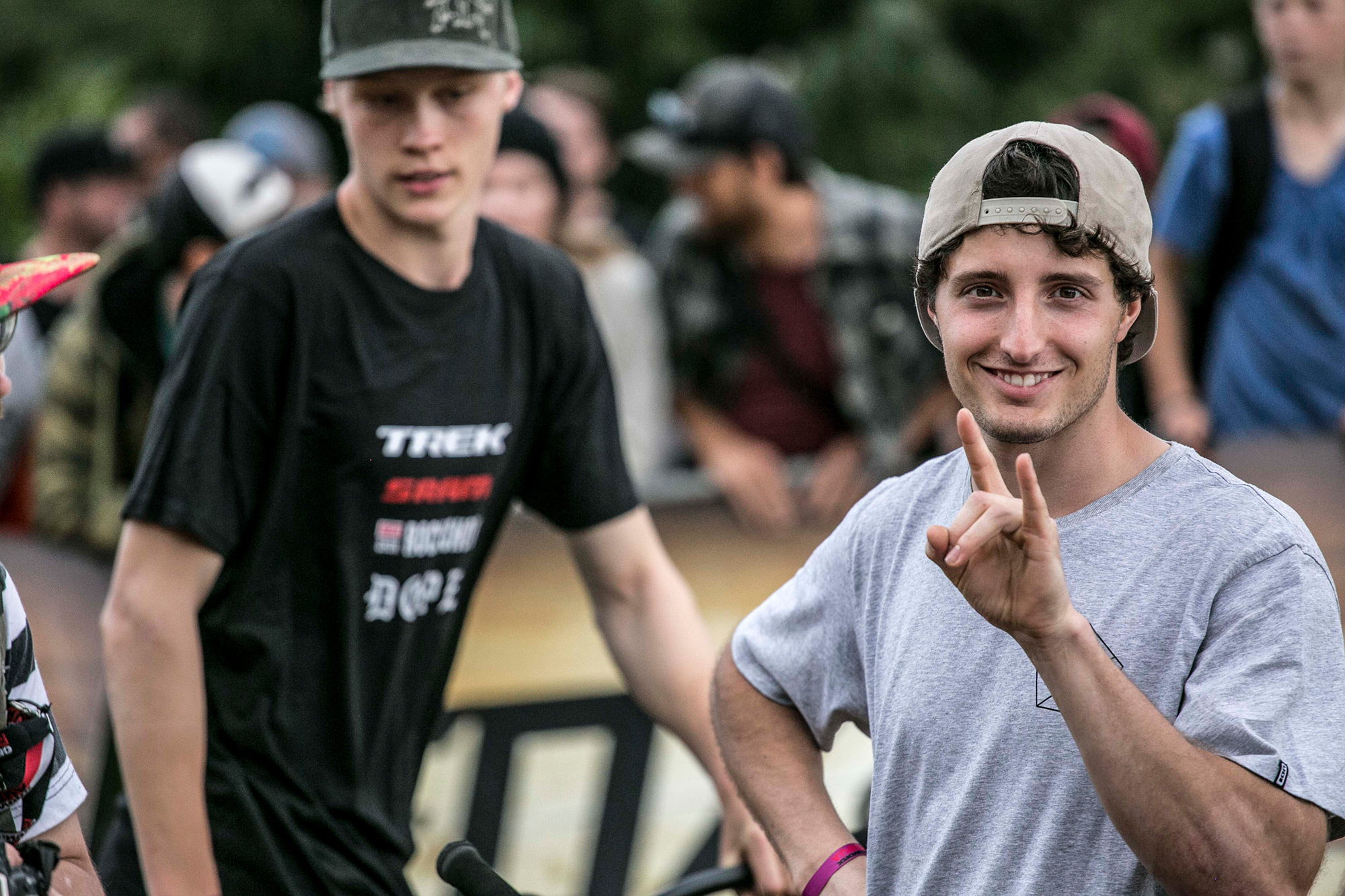 With Nicholi’s run looming over all other contenders we were all in for a battle for the podium spots. Ryan Nyquist rose the first eyebrows in the second run. After slipping on the last jump in his first run, the 38-year-old fixed it in his second attempt stomping a 91.33 score into the dirt. This catapulted the legend from second to last into 2nd place. Nyquist was able to hold on to that spot until Torquato Testa shook up the podium once again. A run including a cork 720 followed by an opposite cork 720 was valued at 93.00. Things heated up with the last 5 riders dropping into the course. A few minutes later 17-year-old Emil Johansson got the crowd roaring with a number of smooth combos. The young Swede, competing at Crankworx Rotorua for the first time, was able to improve his previous score to 92.00. Pushing Nyquist off the podium, Johansson secured his first podium at an FMB Diamond Series Event in his young career. Messere, Fredriksson and Lemoine were all not able to handle the pressure and couldn’t improve their runs, leaving it up to Nicholi to send a victory lap in honor of Kelly McGarry. “I had my winning run in my mind during the course of the week. I knew I had to send it, because I knew all the guys were going to be amazing. The motivtaion was sky high. To make it happen was too good. These fans gave me so much support down here, so I had to give them a little more in that victory lap. Thanks to the fans and I hope McGazza is proud above.” 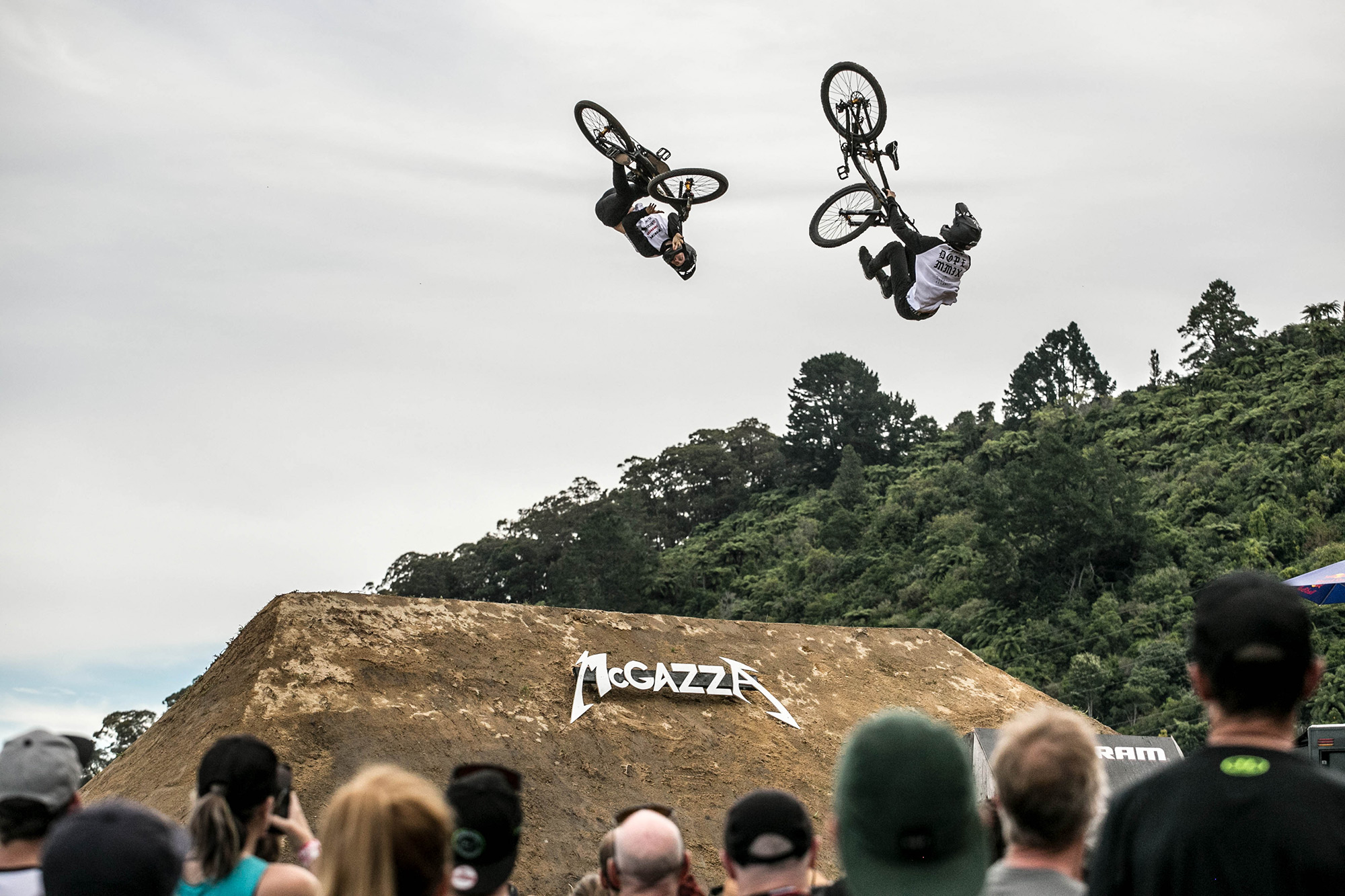