Happy Birthday EUROBIKE! For the 25th year thousands, of bike fanatics will be travelling to Germany this week to take a look at everything new and shiny in the biking world for 2017. This year the biggest cycling trade show in the world invites the public to the EUROBIKE FESTIVAL DAYS for the first time.

Danny MacAskill and his Drop and Roll Crew will be joining the party on the newly created EUROBIKE FESTIVAL DAYS where everyone can have fun, be amazed and test products over the whole weekend from September 3rd to September 4th. “EUROBIKE is one of the most important shows of the year for me. It’s really great to be able to meet so many friends and people from all over the world. To be doing a Drop and Roll show there is really special and I am really looking forward to the weekend”, says Fabio Wibmer, the youngest member of the Drop and Roll Crew. 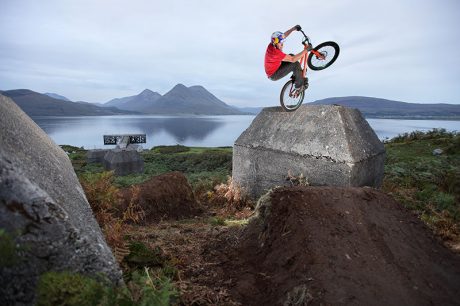 The Drop and Roll Team will be in Friedrichshafen for signing sessions with the Drop and Roll Tour Partners before showing off the wildest trick combinations on Saturday and Sunday from 10am. Fans can look forward to the inexhaustible creativity of Danny MacAskill & Co. and get ready to be amazed by scary drops, fence rides and backflips. “It’s always fun riding the shows at EUROBIKE but for me the best part is catching up with other riders and friends within the industry. Everyone is so busy doing their own things throughout the year and EUROBIKE is the one time that pretty much everyone gets together”, explains Duncan Shaw.

The loudest kids or even parents (if they are lucky) can look forward to an array of great prizes, which will be handed out personally by the stars of the show: Five Ten Shoes and T-shirts, full sets of Magura Disc Brakes, Muc-Off Bike Cleaner, custom Drop and Roll Lezyne multi tools and pumps that aren’t available in shops, Continental tires, and GoPro cameras. For those, who have always wanted to shake Danny’s hand and have a chat, there will be a signing session after every show. Duncan Shaw is really looking forward to a great fans and shows: “I think it’s fantastic that they have doubled the consumer days. We have always had great crowds at EUROBIKE but I guess this just means they will be bigger and better than ever!”

Over 20,000 bike enthusiasts are expected this year to celebrate 25 years of creating momentum for the business. “It’s amazing how bikes and other equipment have developed and progressed in this time. It’s unbelievable how they always manage to build even lighter bikes year after year. This helps us to be able to do more and more on two wheels. This wouldn’t be possible without the progression of the past decades”, explains Danny MacAskill. Team member Duncan Shaw is also impressed by the developments: “Technology has definitely played a big part in the progression of trials. Even though trials bikes are pretty simple, they have come on so much in the past 25 years making it much easier to do the riding we do in our shows.”