“A perfect location for enduro”: is this the kery phrase, borrowed from the event’s speaker, which best sums up the Superenduro PRO held in Massa Marittima on august 29th and 30th. This lovely town situated in the beautiful hills of Maremma, one of the most beautiful areas of Tuscany, was the perfect stage for this event, made even better by the efficient local organizers, guided by Simone Gorelli along with the partners Massa Vecchia, Ventaclub Resort Pian dei Mucini and Podere GIarlinga.

Simone and its staff worked for many months tomake sure this Superenduro race lived up to Massa’s reputation as one of Europe’s prime riding destinations. Most importantly the trails were absolutely perfect for a Superenduro race: some of them freshly cut for the occasion, others already existing, the were unanimously deemed a great expression of Superenduro riding.

The 50km long course, with five special stages, was particularly tough especially for the high heat and the short but steep climbs, but all the riders seemed to enjoy it a lot.i On top of the courses it was also the great hospitality that made this event special: most of the riders were hosted by the Ventaclub Resort Pian de Mucini, which made the weekend a true holiday for all, as it wasn’t unfrequent to see entire teams and groups of riders, along with their friends and families, lounging by the pool after a hard day of riding. 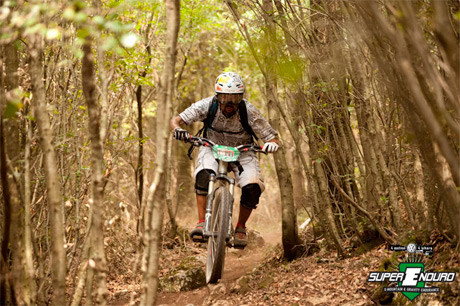 The race got underway saturday afternoon with the spectacular prologue in the streets of Massa Marittima’s town centre, with a striking setting for the course amongst ancient walls, cobblestone streets and stone staircases, which ended right up in the town’s main square, were food and drinks awaited the riders for an apres-race happy hourse.

The day after things got really serious, with the 9:30 a.m. start from Pian dei Mucini for the five special stages, the first and second to be repeated twice and the third one as the final. Marco Rodolico lead the race right from the beginning, proving himself in great form and being able to manage his energies well in the searing heat of sunday to keep an amazing pace on the special stages, to collect a well deserved win in the overall and in the SE3 category. 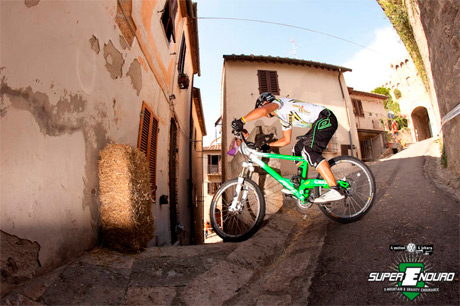 The SE1 category was won by Leoluca Scurria, at his first Superenduro race, like the winner of SE4 Stefano Rota. SE2 saw the Superenduro specialist Vittorio Gambirasio winning once again, as Elisa Canepa who continues her domination in the SED category. SE5 was won by Giovanni Barbolini, and the team classiication by team Surfing Shop.

win in Massa Marittima consolidates his lead in the overall classification, while the final win is still to be decided in many categories, and this will make for some good racing action at the next three rounds of the Superenduro series, the Sprint races in Priero on september 12th and in Andalo on september 27th and the final race of the season, the PRO in Finale Ligure on october 24th and 25th.. 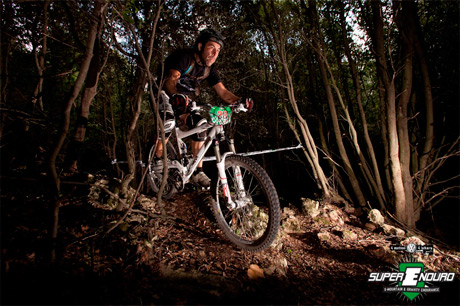