Martin Soderstroem won the mountain bike dirt jump, as well as the 4X competition at the international Eurobike tradeshow in Friedrichshafen, Germany. The young NS Bikes team rider from Sweden is the first one ever to dominate both disciplines at Eurobike.

“I am super stoked about my double victory in 4x and dirt. I just entered the 4X for fun and then I won it along with the dirt jump contest. It feels like another great win, even though it wasn’t the biggest contest!” said Martin, who already went on the podium of a whole bunch of freeride competitions this season. He just won the Send It Jam in Are, Sweden on the last weekend in August, which added to his several wins in 2009. But certainly his 3rd place at the Crankworx Slopestyle in Whistler was his biggest success in 2009.

The list of riders at the Eurobike dirt jump contest also meant a tough competition: the 10 finalists from 8 nations included big names like Sam Pilgrim (GBR), Amir Kabbani and Benny Korthaus (both GER), Phil Sundbaum (USA), as well as last year’s winner Darren Pokoj (AUS). Amir Kabbani set a good level to beat with runs including backflip one hand x-up, 360 tailwhips and 360s – third place for him. Sam Pilgrim topped it with a run packed with a 360 barspin, frontflip and tuck nohander. But Martin Soderstroem scored best with a 360 tailwhip, a double tailwhip and a double bar spin.  Even though the jumps were super small, all finalists showed great performance.

Martin decided to compete also at the 4X comp for fun. He raced 4X before, but never really with an international field of riders and never in front of 5,000+ people. The qualifications showed that the first section with doubles gave Martin a real boost compared to his competitors. The 19yr. old was even able to play a bit during his qualifying runs and practice, pulling barspins and table-tops, so you could see he had fun. For the finals, he rode safe runs, leading from the first sections until passing the finish line. The other riders didn’t seem to have a real chance: 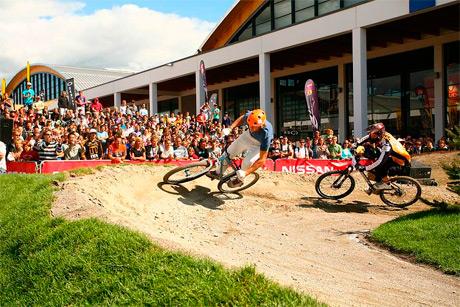 Martin had an amazing season with 11 podiums including 8 wins. The young gun will take a short time out now at home in Sweden to decide, if he will make his way to the Roc D’Azur mountain bike festival in the South of France (Frejus, 7th to 11th October) that features a packed program including a international dirt jump contest. Let’s see.

Story and Photos courtesy of rasoulution.com