After a first and copious snowfall in November, the shaper team has worked hard on the park base, waiting for the temperatures to get low enough to allow the snow cannons do their job.
Because Mottolino Fun Mountain is always a treasure trove of innovation and, starting from last summertime, had prepared the area providing it with new snowmaking plants over the S and XL lines. This technical intervention is the progression of the works started last year on the M line, which success has brought to extend the snow cover of further hundreds of meters. By doing this, the low temperatures will guarantee the presence of snow all winter season long and help the park maintenance, letting the freestylers keep on having fun on the perfectly shaped obstacles. 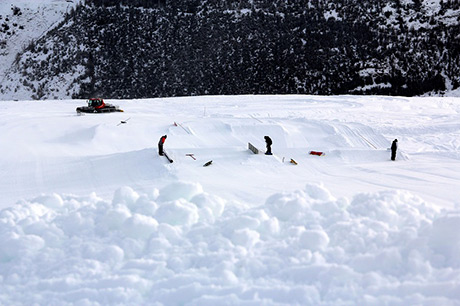 News are not finished yet, for beyond the snowmaking plants empowerment it will be possible to witness to Mottolino’s jibbing side evolution. In fact, the new partnership with the German company Schneestern is not limited to the park design, but it will also generate significant changes through the addition of at least 15 new structures, among which butter boxes, flat rails, kinked butter boxes, sliding tubes and bank spines.

The access to Mottolino snowpark is easy and very convenient: the Trepalle chair lift allows freeskiers and snowboarders to go on riding without energies wastes while reaching the park, enjoying all the obstacles in sequence on the 5 lines, from the XS to the XL, for riders of all levels. 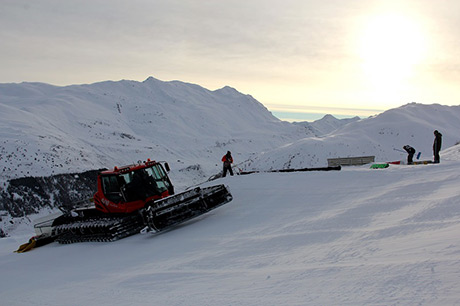 About Mottolino Snowpark
Mottolino Fun Mountain is renowned for its snowpark, among the best in Europe, built with passion taking in account obstacle quality as well as riders’ safety and fun. Already theatre of three editions of Burton European Open and seven of Burn River Jump, it will soon host the 10th World Rookie Fest edition and the 4th of Nine Knights.
The snowpark is extended over a 120,000 m2 area, equal to 30 football pitches.
5 lines for different riding levels are set, from XS to XL, with a snow cover guaranteed all over the season thanks to its snowmaking plants. Partner of Mottolino snowpark is GoPro.
For more info please visit www.mottolino.com and become our fan at www.facebook.com/MottolinoFunMountain.