France’s Myriam Nicole and America’s Aaron Gwin have each laid claim to their respective overall UCI World Cup titles in a drama-laced seventh round of the series in Val di Sole, Italy.

This has been a year which will long be remembered for its abundance of drama; some has been weather-induced, some has been mechanically-induced and some has just been sport in its purest, most entertaining form.

In the women’s race, Myriam Nicole sat in the start hut wearing the points leader’s jersey knowing that the title was hers to lose. She couldn’t afford to put a wheel wrong and the track in Val di Sole is an incredibly easy place to do exactly that. 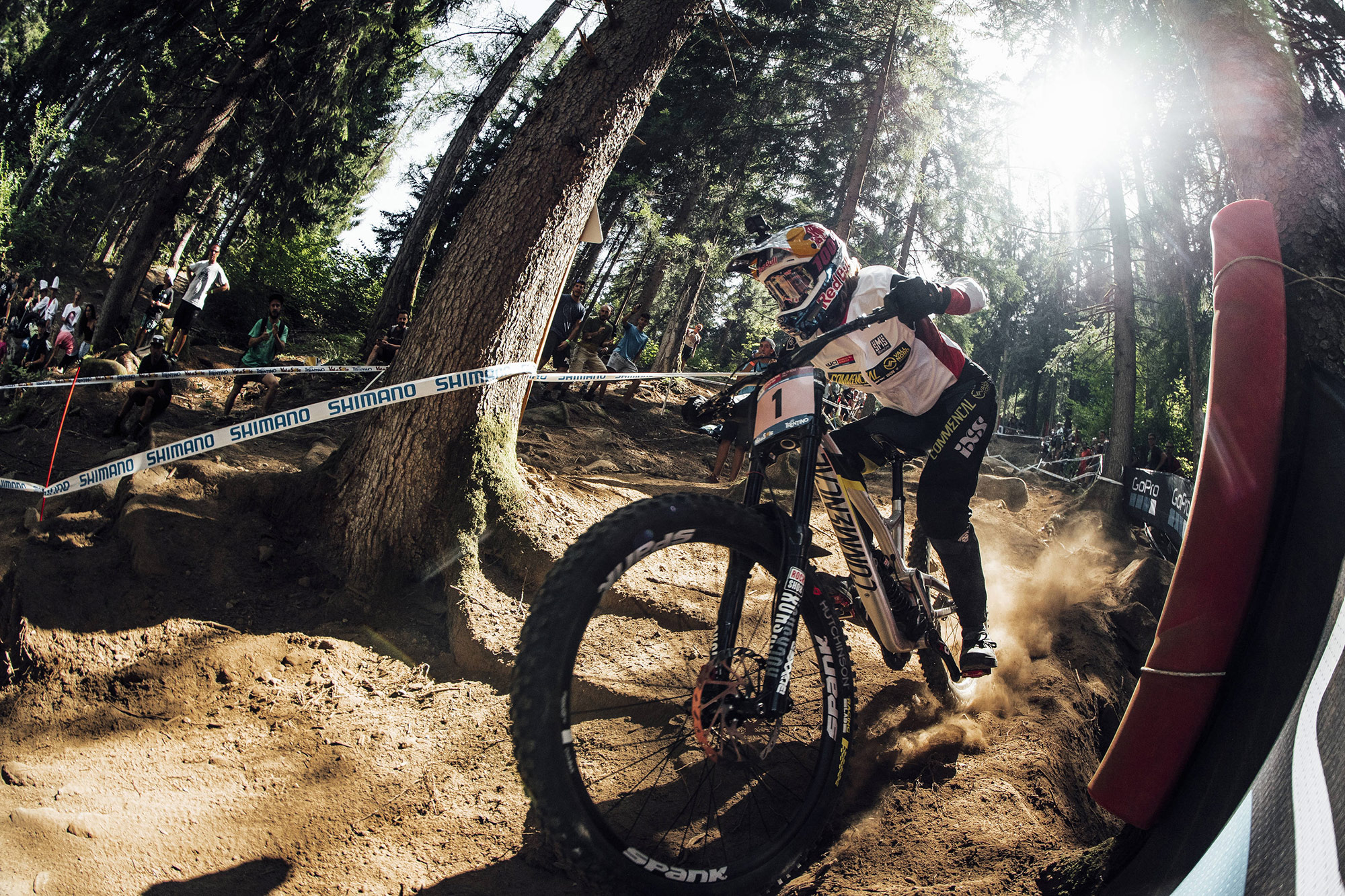 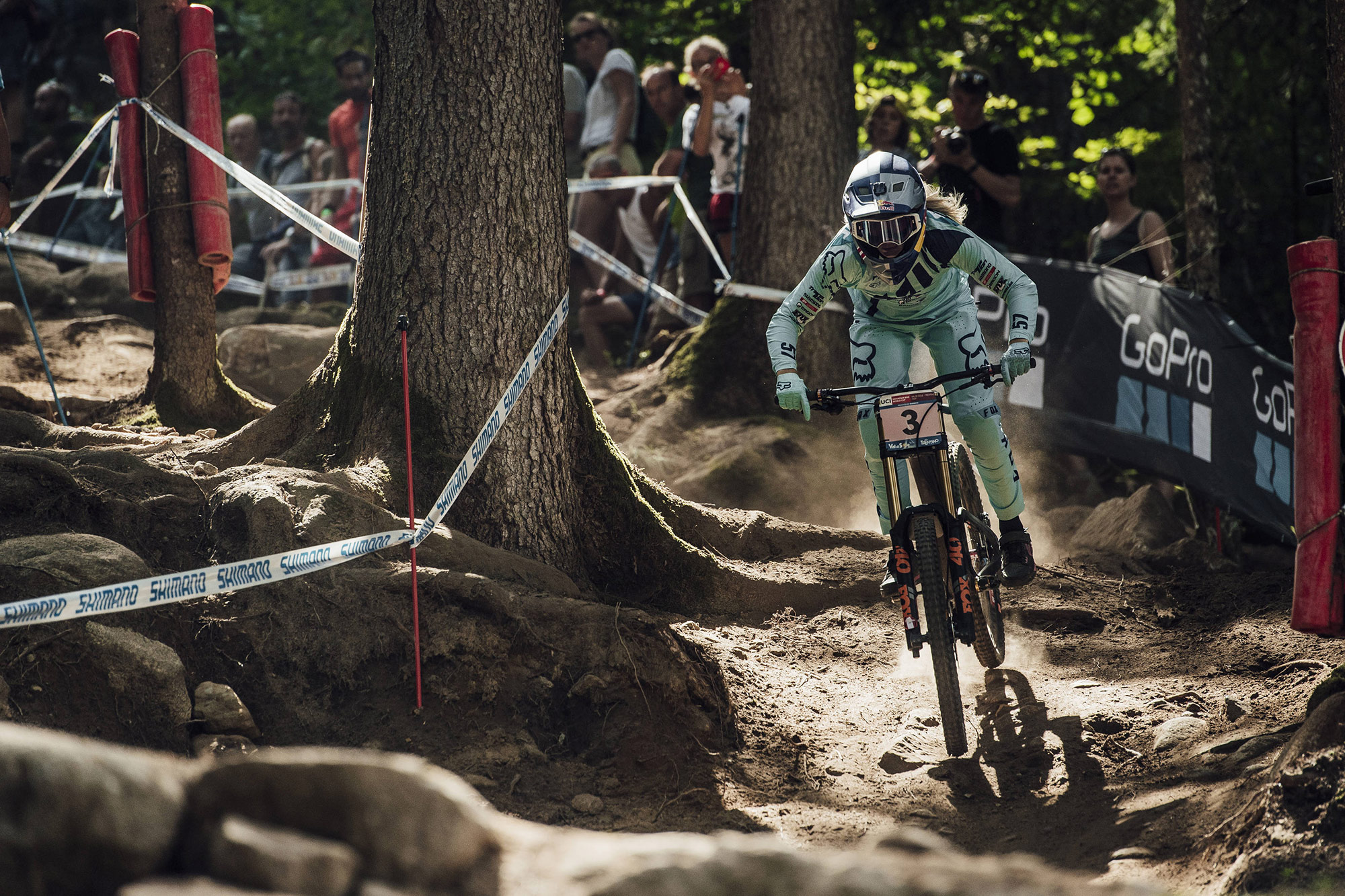 and Tracey Hannah) dropping at the head of the field, ‘all’ she needed to do was to take to the hot seat to guarantee herself the win. Nicole has won in Italy before and she used every ounce of guile and talent to massage her Commencal through the treacherously steep roots and rocks. She crossed the line to take to the then top step and claimed the title in the process. Hannah, with eyes on the World Championships set to be hosted in her native Cairns crossed the line to ultimately finish second whilst Seagrave proved irresistible and arrived into the finish line to claim her third UCI World Cup win of the year. 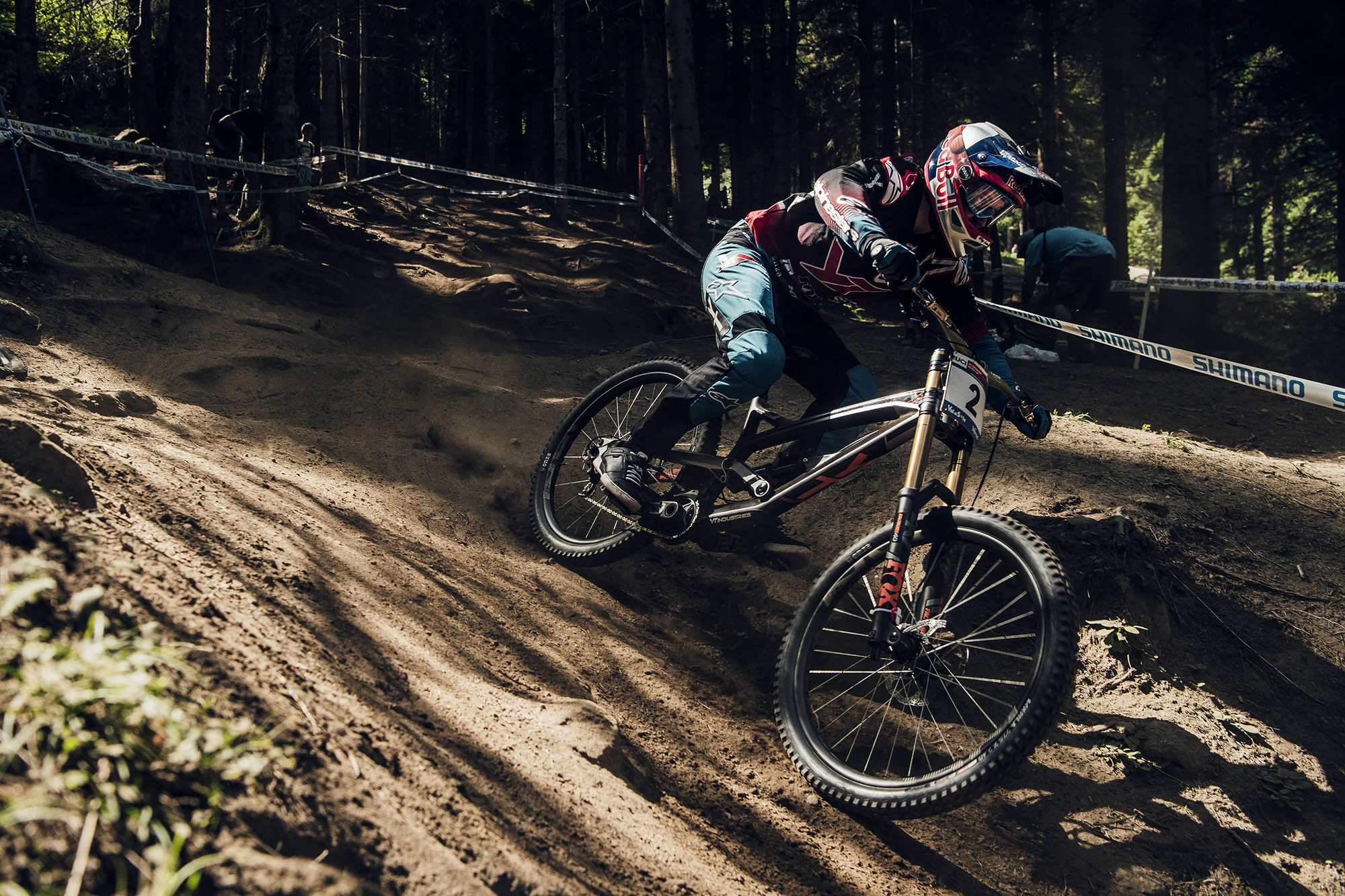 In the men’s race the stage was set for a titanic showdown between the two greatest World Cup racers of all time; South Africa’s Greg Minnaar and the Californian, Aaron Gwin. 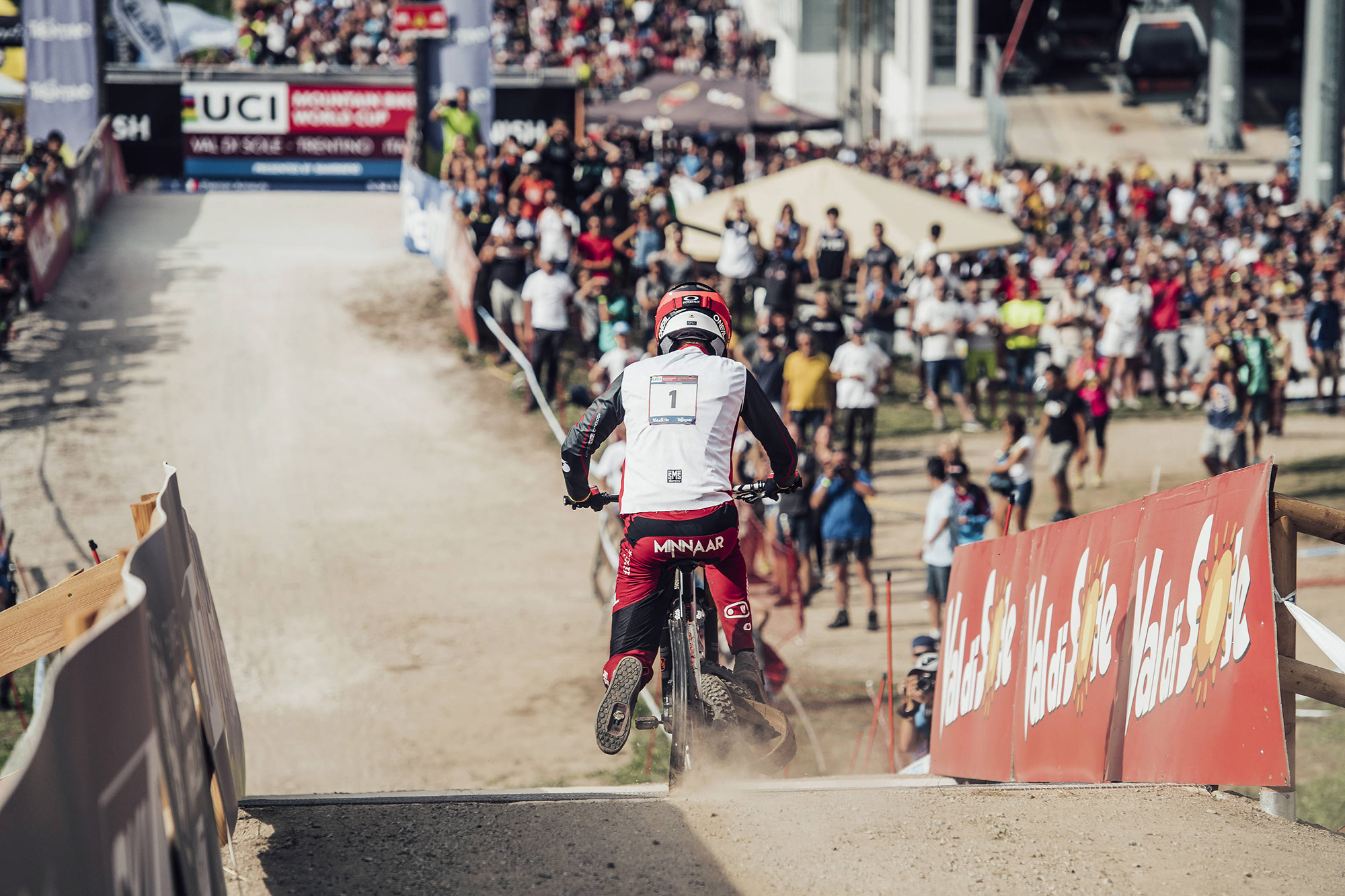 Minnaar had destroyed a bike during the final practice run before the previous day’s qualifying session only to climb back aboard a freshly-built charge to come second to Gwin by just a single tenth of a second. Whichever of them finished ahead of the other was guaranteed the title. A tumultuous season was set to come down to a pair of race runs. 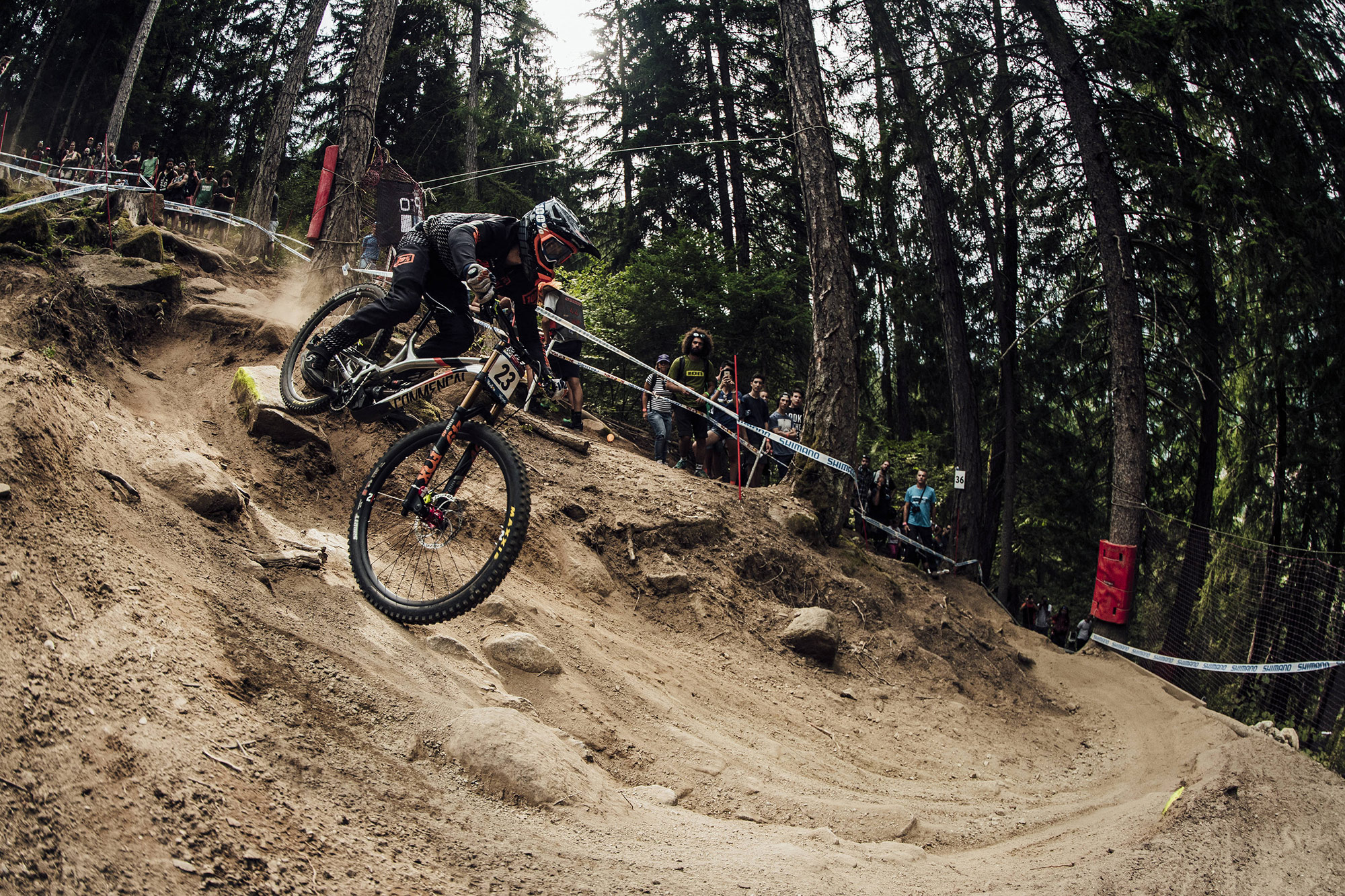 Minnaar went first and was one and a half seconds up on the then hot seat resident, Amaury Pierron. Then disaster struck. As he skirted the impact zone of the previous days crash, Minnaar’s rear tyre let go. The Pietermaritzburg native was forced to ride on until his wheel finally disintegrated and he was reduced to walking the final stretch to the line.

Gwin, who had by now left the start hut, had no knowledge of his great rival’s demise and set about lopping tenths of a second from the clock with brutal metronomy. Pierron, on the cusp of his debut victory was left aghast as Gwin plummeted towards the line. 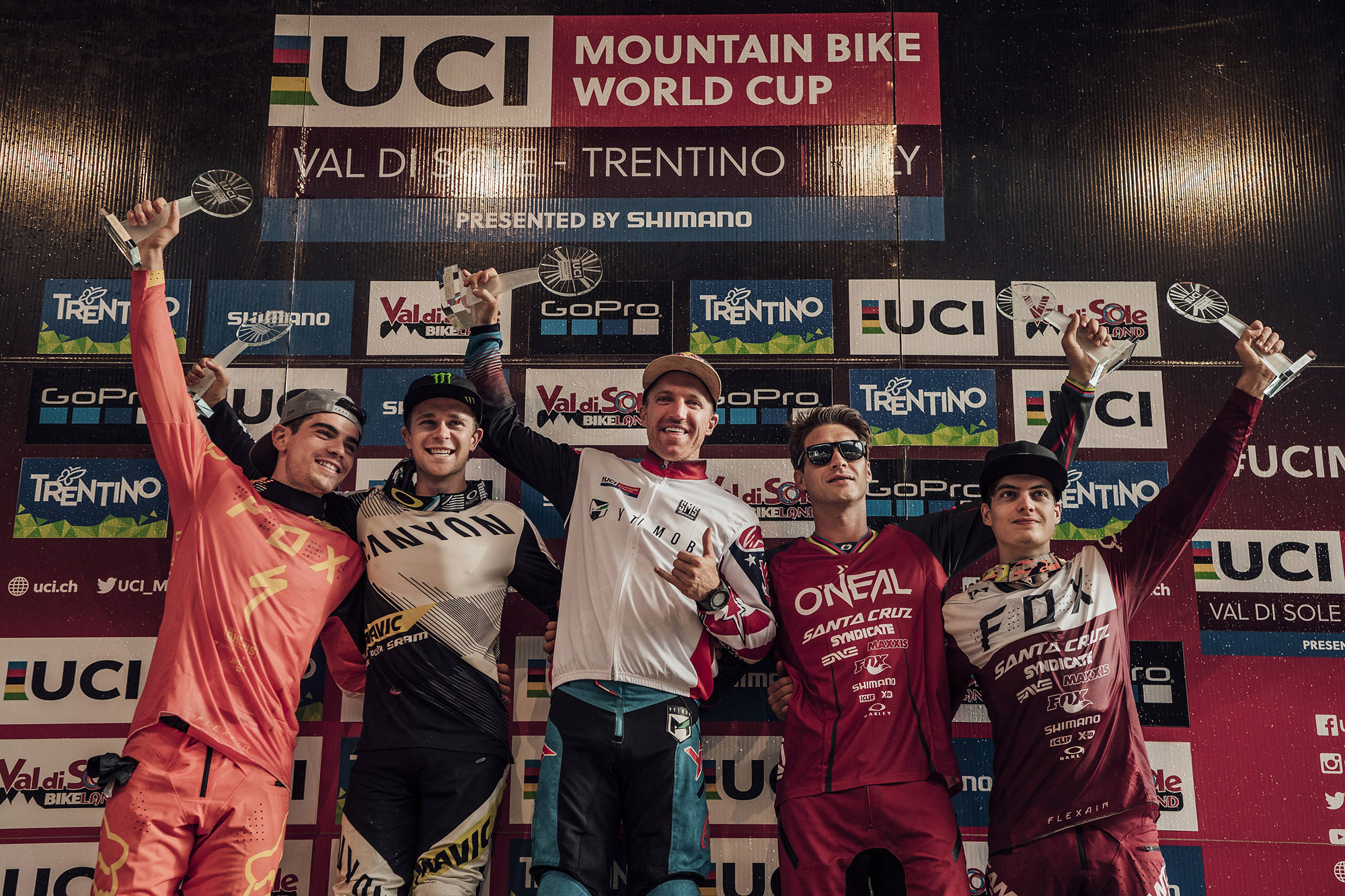 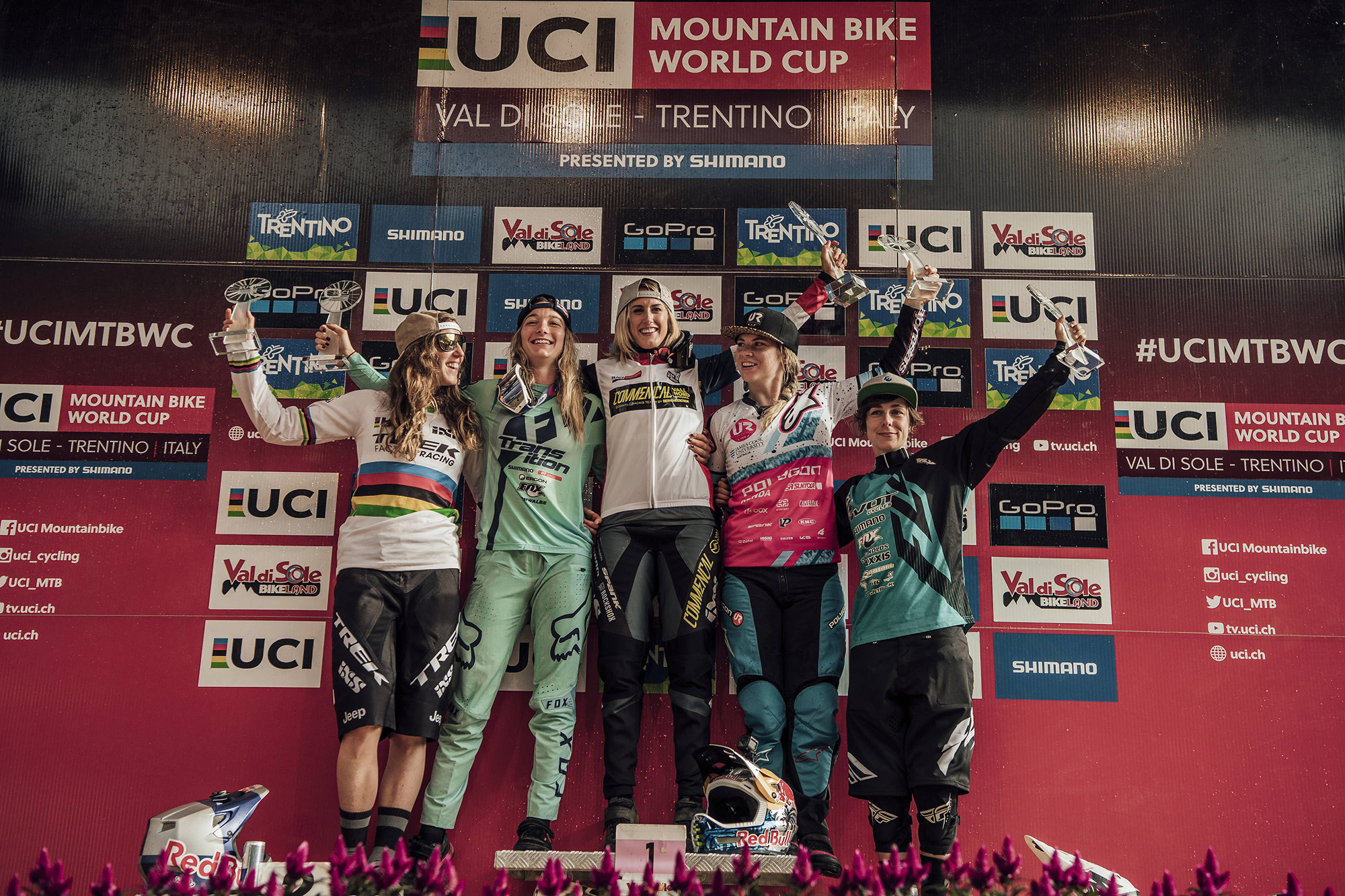 A title which after the first three rounds of the year had looked to be dead in the water was realised. For the fifth time in his career the greatest American rider ever claimed one of the sport’s ultimate prizes.