For the third year running Lenzerheide greeted riders and fans of the UCI Downhill Mountain Bike World Cup with blue skies, hot temperatures, stunning scenery, a difficult track and finish and pit areas next to a crystal-clear lake. With an unprecedented 4 different winners in as many races in the men’s as well as women’s categories this season, the 5th stop of the UCI Downhill World Cup promised tight and fierce racing. And one year prior to hosting the UCI Mountain Bike World Championships, Lenzerheide certainly kept that promise. 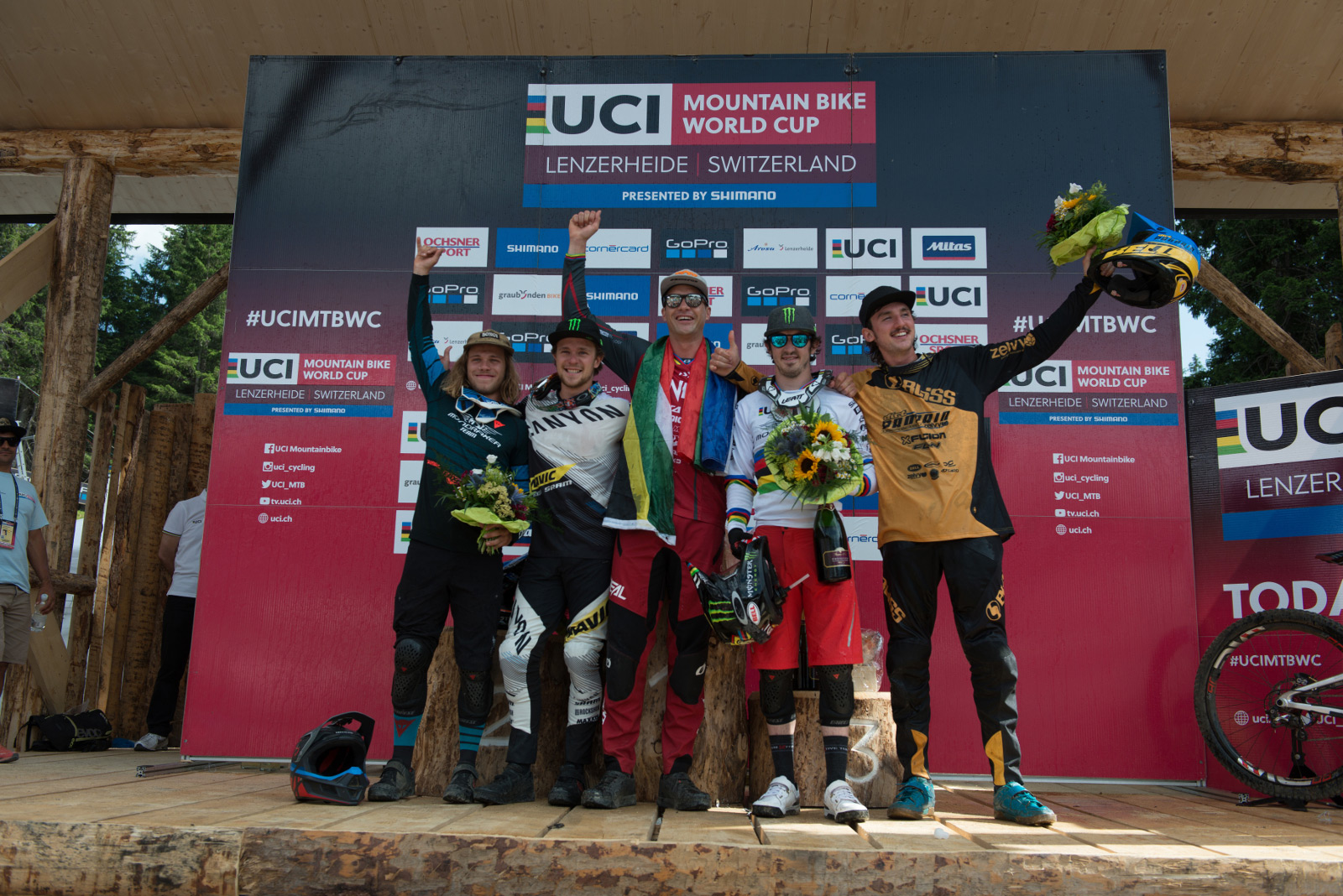 In an exciting and tight race, it was Luca Shaw (USA) who put down the first scorching run in the heat and dust of Lenzerheide Bikepark but it didn’t last long as shortly after British rider Phil Atwill edged him out of the hot seat by a mere 0.09 seconds with a wild and aggressive run. Atwill barely had the time to sit down though as straight after him as fellow Brit Laurie Greenland showed risky line choices and put down a lightning fast finish section and took over the hot seat, becoming the first rider ever to stay under the 3-minute mark on the STRAIGHTline in the process. The true speed and value of Greenland’s run then became apparent as rider after rider coming down failed to beat his time. 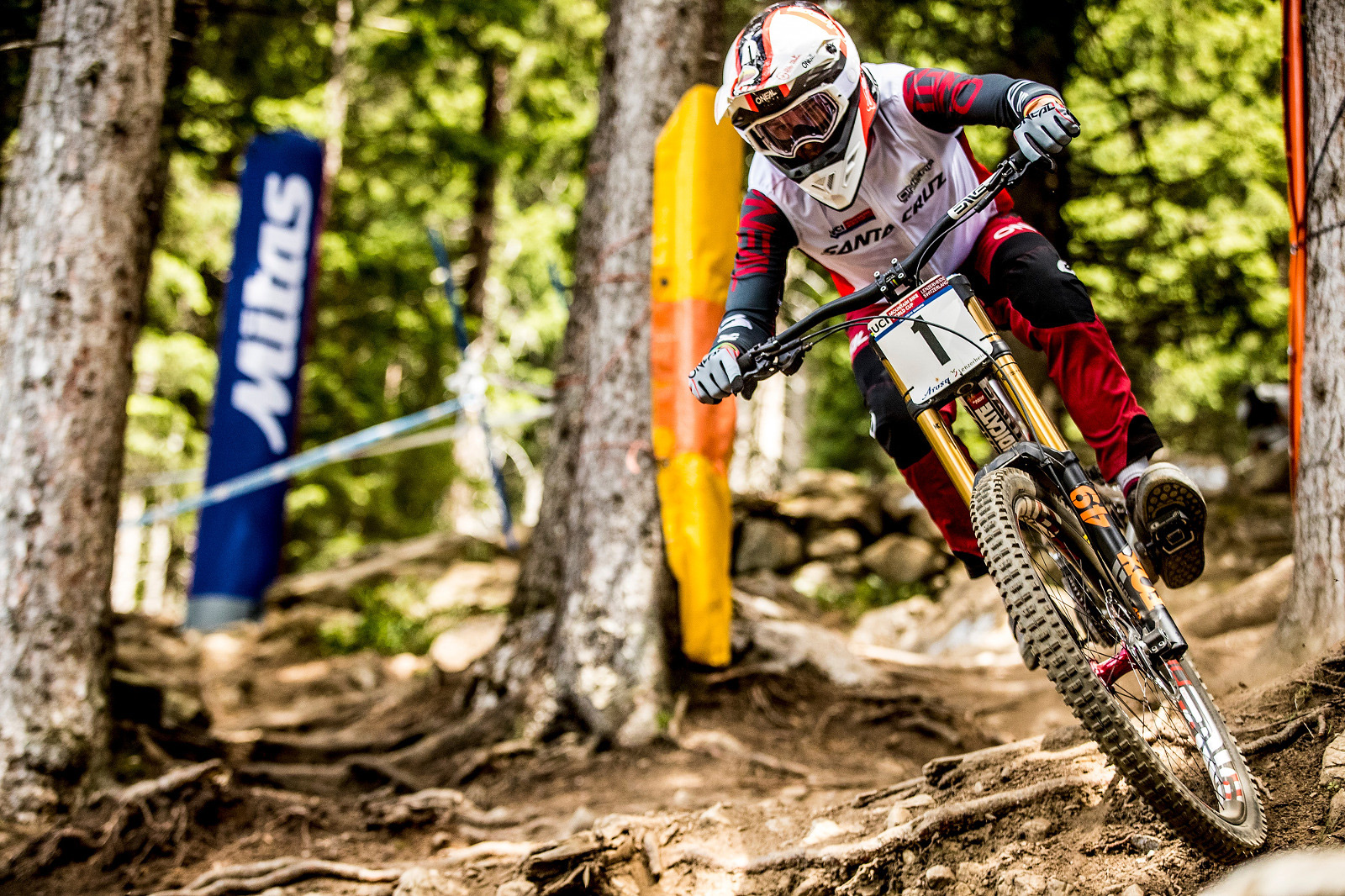 The 11th rider to follow was last year’s winner in Lenzerheide, Danny Hart (GBR). The 25-year-old took to the track and threatened Greenland’s time. Attacking the 2.2km long high-speed course with the aggressive and spectacular style he is known for, Hart was up at Split 1 and continued to build speed, crossing the line 1.1 seconds faster than Greenland with 5 riders left at the top. After Loris Vergier (FRA) wiped out in the first turn, ruining his chances of a top time, and fellow Frenchman Loic Bruni failed to top Hart’s time, all eyes turned to the top 3 qualifiers – and top 3 in the World Cup overall standings – Greg Minnar (RSA), Troy Brosnan (AUS) and Aaron Gwin (USA). 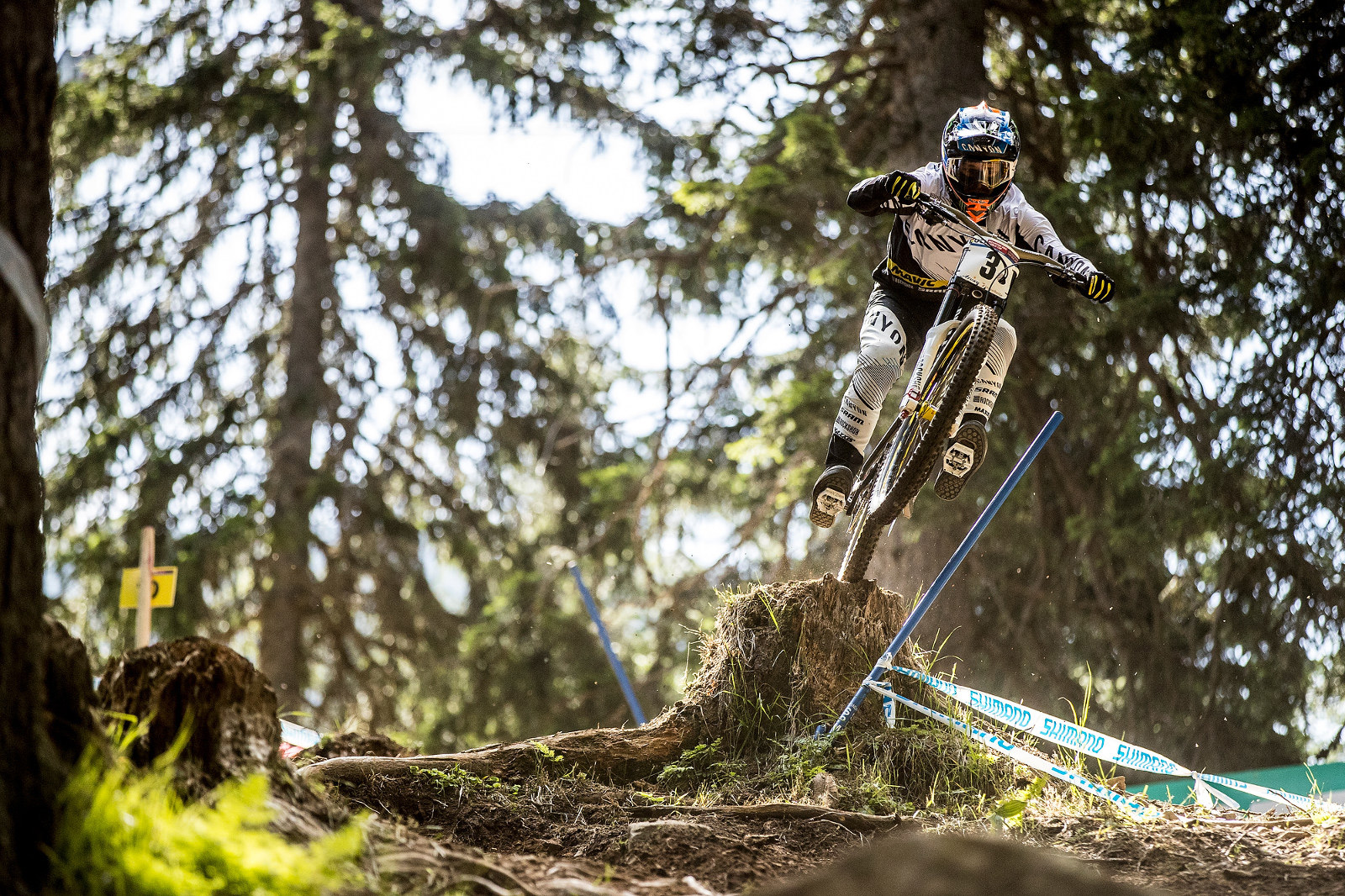 First to drop in was World Cup overall leader Greg Minnaar and the South-African did, what he does best – riding at break-neck speed and making it look effortless. Choosing slightly different lines and going big and fast on the technical features, Minnaar crossed the finish line 1.2 seconds ahead of Hart. Andorra-winner Troy Brosnan was up next and in a nail-biter of a finish after being virtually tied the entire way down, Brosnan crossed the line in second, only 0.16 seconds behind Minnaar. Last on track was 2016 World Cup overall winner Aaron Gwin and it seemed like it was going to be his day, with a lead of 0.6 seconds at the first Split, Gwin continued to find speed and by the last split he had carved out a lead of 1.5 seconds before disaster struck in form of a flat tire just above the final section of the track. 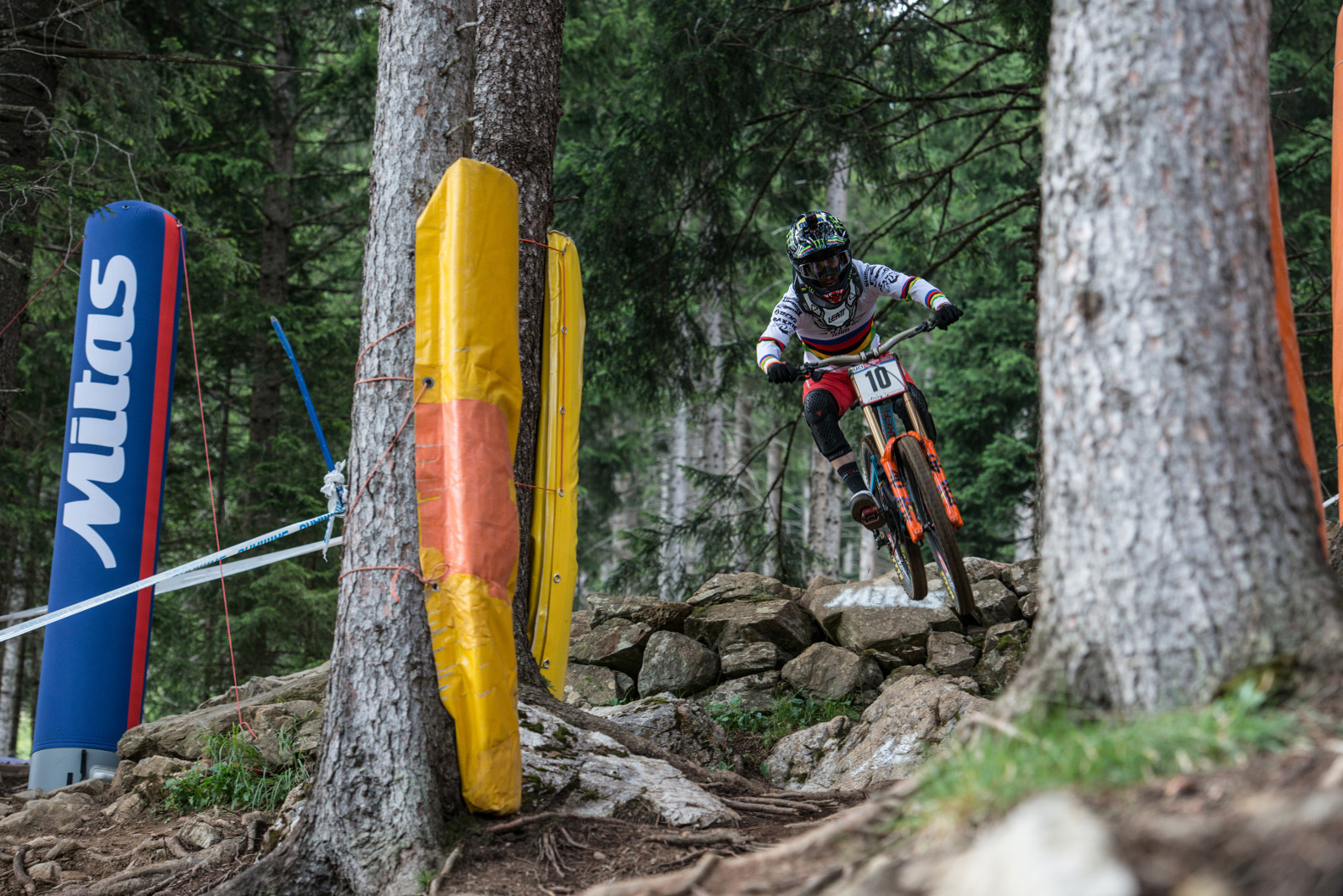 With his second win in Lenzerheide, Minnaar managed to extend his lead in the overall standings, while Troy Brosnan’s second place sees him overtake Gwin as Minnaar’s closest rival for the Overall World Cup title going into the last two races of the season.

Greg Minnaar (RSA):
«It’s been a hard race today. There are so many big hits everywhere, it’s tough. Just getting down the main line in one piece is already a challenge. It’s a great venue for mountain biking though, the crowd is super passionate and very enthusiastic, it’s a good place to come and race.»

Laurie Greenland (GBR):
«Today’s been awesome, I have been going for the podium for a while now and I had my eyes set on a podium here. To come 4th and get my first World Cup podium is a dream come true. I always love it here, I won my first Junior World Cup in Lenzerheide, so this a place that is always going to be in my heart.»

Coming into Lenzerheide, the women’s field had seen four different winners in as many races this season and the fight for the overall title is as close as it gets with less than 60 points separating Tracey Hannah (AUS), Myriam Nicole (FRA) and Tahnée Seagrave (GBR). 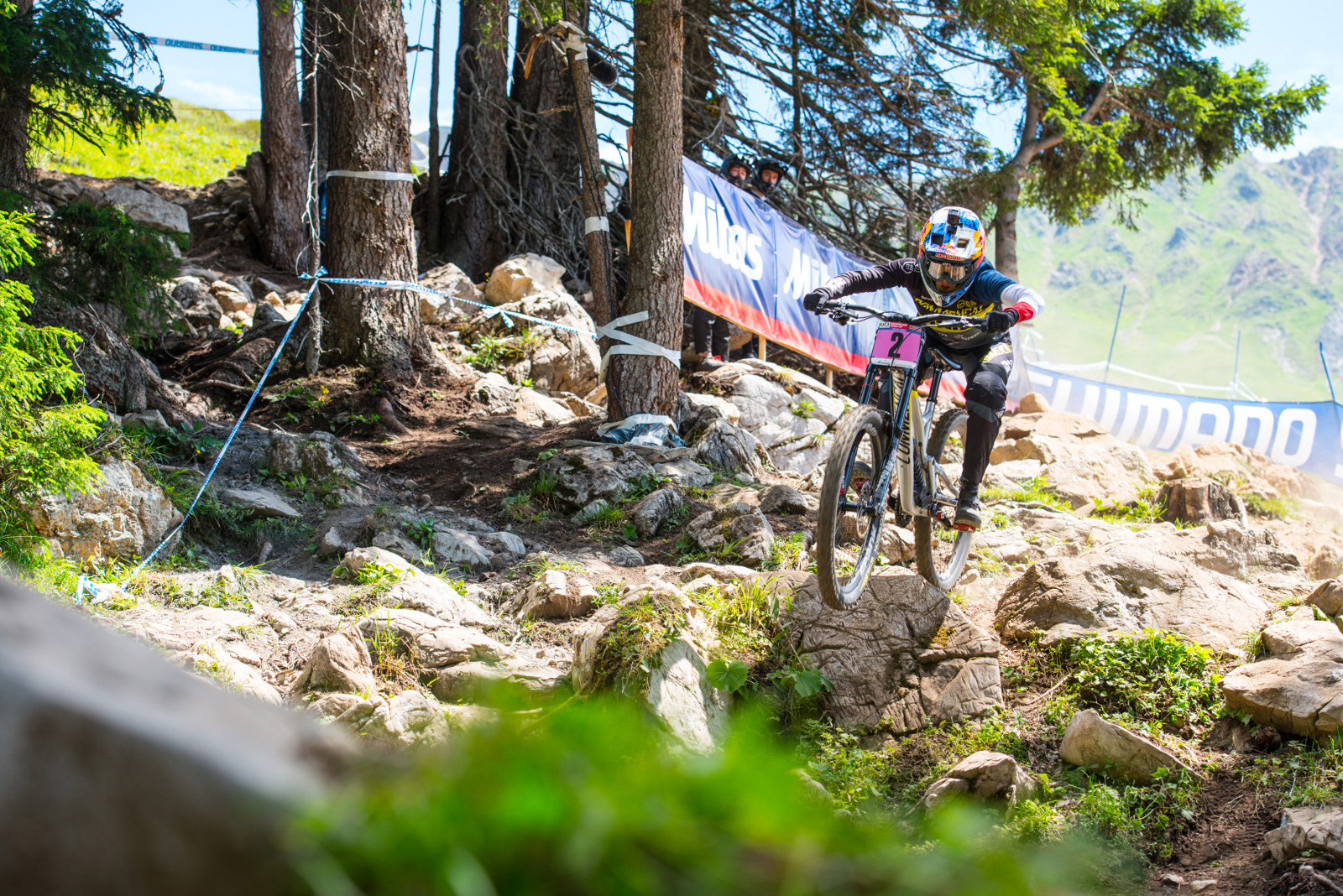 The Top 5 qualifiers started with Seagrave and sure enough she put down a run that looked like a winning run. Seagrave was nearly 5 seconds up at the last split before sliding out on the dusty surface of one of the last turns. After the mistake it was obvious she would not take the win but a quick recovery saw her finish in 5th despite the crash. Next to tackle the track was Emilie Siegenthaler (SUI). Keen to deliver a good race for the home-crowd, Siegenthaler made quick work of the difficult rock garden at the top and technical root sections and, accompanied by the roar of the Swiss crowd, crossed the line quickest with only 3 riders left at the top.

After a few small but costly mistakes towards the bottom saw Tracey Hannah fall behind Siegenthaler, all eyes were on the last two women at the top – current World Champion and two-time Lenzerheide winner Rachel Atherton (GBR) and Andorra winner Myriam Nicole. Both of them showed incredible pace and flawless runs but in the end, it was Nicole who managed to edge out Atherton by a mere 0.5 seconds to take the win. To the delight of her home-crowd, Emilie Siegenthaler finished in 3rd. With back-to-back World Cup wins, Myriam Nicole has now also taken over the overall lead in the World Cup standings from Tracey Hannah. 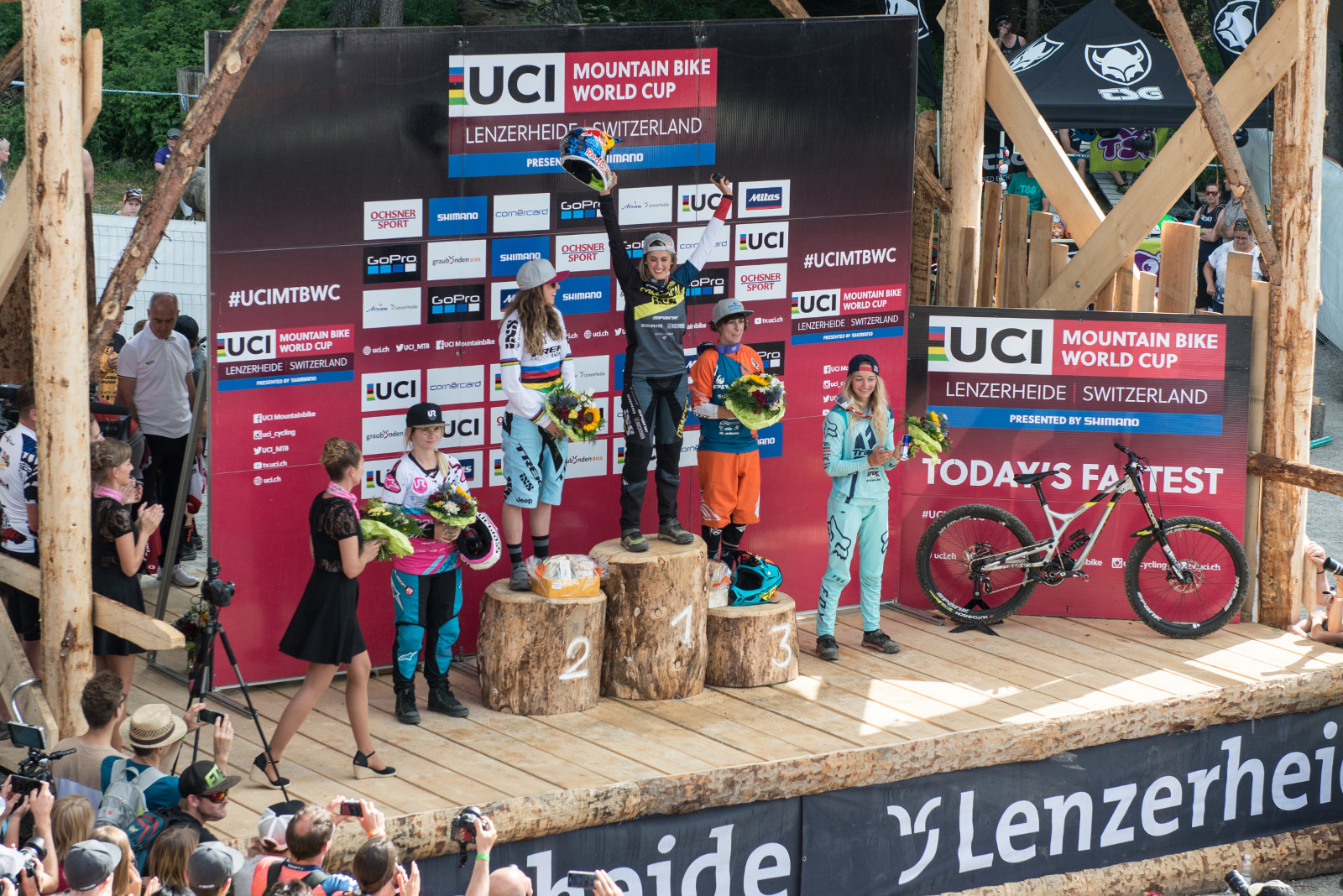 Myriam Nicole (FRA):
«It’s unreal, I didn’t think that I could take the win here, I just thought about putting down a clean run and finding good flow because the track here is so hard. The whole week has been unreal; the lake is just magic and I was surprised how many people were here. I’m stoked to come back for the World Championships next year.»

Emilie Siegenthaler (SUI):
«The conditions were perfect, after the rain overnight the track was a bit slick this morning but by race-time, it was perfect. I’ve had one small mistake but I have never been so close to a win and to do that on home-soil with my whole family here is just unreal, I’m just so happy.»

With the downhill wrapped up, World Cup mountain bike racing in Lenzerheide is far from over. The world’s best cross-country riders will go head to head in Lenzerheide tomorrow from 12 pm during the UCI Cross-Country Mountain Bike World Cup.

A replay of the downhill World Cup in Lenzerheide as well as a live-broadcast of the cross-country World Cup races are also available on Red Bull TV.