The path and the program of the third edition of Nissan Townhill 2008 were defined.

Though maintaining the beautiful environment of the historic heart of Bergamo, Città Alta, this year the Bergamo Nissan Townhill will snake on a new path relative to the previous editions.

The departure will be from the symbol square of Bergamo city, Piazza Vecchia, in front of the ”Duomo” and the ”Palazzo della Ragione”, under the arcades of the Library.
An important result for the image of this event that is earning space and consensus by the city of Bergamo that hosts it.

For all bikers this is a great oportunity, to live the experience of running in an historic centre of a city full of charm and beauty, without inconvenients.
Not invading the public transport streets the athletes subscribers will could try the route since Saturday afternoon. So they will take more familiarity with the artificial barriers that will be structured along the way.

The run snake in the narrow streets of the old town, reducing the pedal tracts.
Shortening the path, will be possible manage the moving departing, allowing athletes to try several times the run and reducing the waiting time, between the finals’rounds to encourage the continuity of the show for the public.
Finally it will increase the number of subscribers to 300, against 200 of the last year, as the forms reached months before the event.

Unquestionable bond, punishment disqualification, is the transportation by foot of one’s bikes in front of the Duomo and through the Piazza Vecchia in respect of the area and the tourists who crowded it during the spring Sundays. 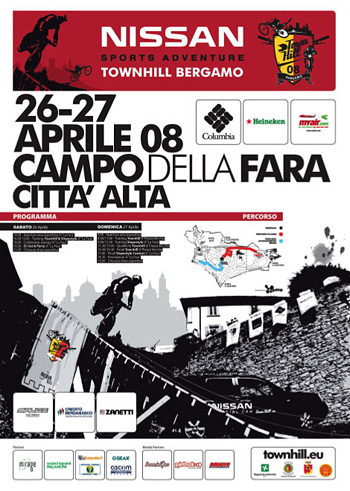 The arrival is structured at ”Campo della Fara”, where will set up the path for the Slopestyle test, it will set up this year by the staff of 4Guimp (www.4guimp.it), a leader in the creation of Bike Park in Italy. International names have already confirmed their presence, as Grant Fielder, Pascal and Mischa Breitenstein of the Kona Clump International Team, as well as the most important names in the Italian Community Dirt, as Jack Bisi, Alessandro Picco and Nicolò Pescetto, the most protagonists of the first two editions and the most European Freestyle events.