Jon Kooley has amazing style it started the first day he stepped on a snowboard. Spending his time putting together amazing video parts, starting off with his breakout appearance in Mack Dawg’s “Shakedown”. He has had numerous video parts over the years and they have all exhibited creativity and amazing rail and skate style of riding. So, when coming to Nitro and checking out the board line he knew exactly which board he wanted and how he wanted it to look. He had his longtime friend Adam draw up a tattoo inspired severed girls head. Jon rides the 152 Swindle, because it allows him to ride a shorter board, but still have a lot of edge contact. It is also soft enough to press through technical rails.

Bryan Fox is a true renaissance snowboarder he rides and destroys everything in his path, from rails to drops, cliffs, jumps and pipes. He just loves to snowboard and does it year round, even if he can’t afford it, he will work to ride. Not a competition snowboarder because he would rather ride with people than rely on a judge to decide what type of snowboarding is interesting. Bryan has been making his mark filming with Mack Dawg’s films. Being raised on snowboard and skateboard films shaped his style, so to match Bryan’s all around riding style he chose the Team 157 and hand drew the eagle with background picks of things close to his heart.

Austin Smith is a natural on a snowboard; this is why multiple magazines have nominated him “Rookie of the Year” and “Video Part of the Year”. Not only does Austin put together amazing video parts, he will throw down at major competitions like the X-games, where he is pitied against some of the best industry jocks. Nitro is so pumped to have this down to earth 18 year old on the team. Austin threw his graphic down on a 155 T2. With his size 10 foot, he loves a little bit wider board for more stability and the T2 has been softened slightly to make it flow smoother through the park 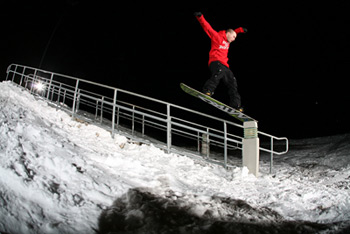