Papik Rossi is a well known name in the skateboarding scene, but kids don’t know much more about him, his life, his family and his deep Trastevere roots. We talked him about his many experiences and projects, read on and show respect to this real Roman native.

Hello Papik, how are you doing?
Great, as usual.

What were you doing 5 minutes ago? And what are you up to in general?
I’m having breakfast in a bar with my wife, my daughter and my dog.

Trustever…another clothing company or is there something else behind it? The name alone scores full on my list…
Thank you for your score, it started 10 years ago; at the beginning it was somewhat of a freaky thing but then my associate tried to take over it and then I had to take out my pride and my passion and I started to push it myself. I plan to go on until I can buy a house with the incomes. My personal advice is to never have a charter partner!!! 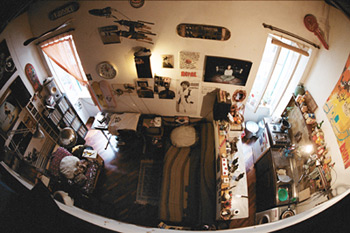 DjRealMerda (DjRealShit)…the name says it all: tell us about your funky music background..
Giorgio of Cor Veleno fame introduced me to the Funk, we lived together for a while in the funkhouse where the only furniture was a stereo set-up and a lot of vinyl..The name comes from the fact I used to record mixtapes withour a mixer and therefore they sucked ass…

Papik and skateboarding, a long term friendship I’d say: I’ve see an clip just a couple of days ago on your myspace and your creative style reminded me of Gonz, Lee..
Thanks, Im honored of the comparison..This is the result of all the time I spent in San francisco.. 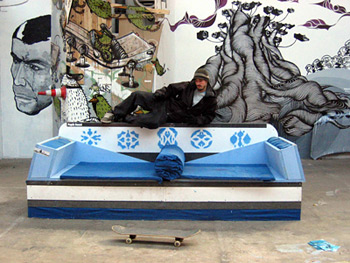 Papik and Mr. Rossi: I didn’t have a chance to read, or to look at, your new book. From the rewievs I found it seems like a diary, a folder where you put all you writings, pictures, sketches and comics..tell us more about it.
The real book was (or still is) in a hard disc of my friend. He had a bad argument with his girlfriend and smashed the computer on a wall, just the day before delivering the draft…so I put together something else in 30 minutes the next day..

Papik and Art..I know you had some pieces, in between art and skateable features, at various shows among which Now-Underground in Milan, 30% Acrylic and Wop in Rome: seems like you are very active..
Art mashed my balls…at the beginning I partecipated at exhibits because you could get free drinks and there were nice girls but then I understood that no one allowed you to be really creative without respecting certain faggot rules…as far as I’m concerned I’m out of it. 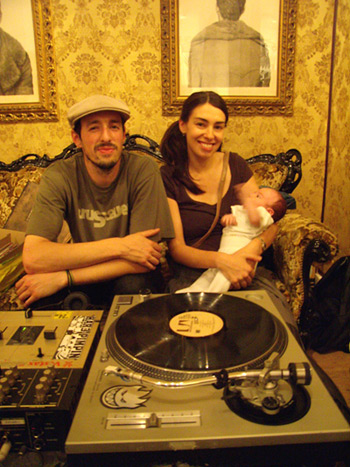 A few years ago I read you had a project named CUATTRO, some sort of shop/exhibit/workshop…can you tell us more?
It lasted a year, I started this project with a friend in the very center of Rome where we had vinyl, limited t-shirts, furniture, drinks, joints…
The only problem was that I didn’t have a permit to open such an activity and the landlord was envious of our businness…

I could ask you questions for hours…anyway, tell us about the funkhouse…
The Funkhouse is a one-room-apartment of 35 square metres in Trastevere (a block of Rome). Once we had a party there with 82 people, with brasilian percussionists playing on JB’s beats, cheap girls, beer, plenty of joints and a cocktail bar run by even cheaper girls.The party was over at 5.30 because the speakers woofers exploded.
The next day I found out I locked a girl inside (I slept at my mum’s, the house was too messy) and a note on the door (published in my book) saying: “one of your guest puked on the stairs, you are gently asked to clean up”. The guest was the daughter of David Gilmour and her punk was pink…