Peetu Piiroinen made history at the 11th BEO, claiming both the slopestyle title and the halfpipe title and his 4th BEO title in total. He had this to say: “I had an amazing week here at the BEO. I was hoping to stand on top of the podium here in LAAX and I am more than happy that I’ve won both the slopestyle and halfpipe events. I’m looking forward to hearing “The Sounds” tonight, one of my favourite bands!” Paulina said after the finals: “This is my first ever victory in a TTR event, I can’t even describe how big this is for me!”

The halfpipe competition today was an exciting one to watch with newcomers like Ilkka-Eemeli Laari, who made his way into the finals all the way from the  pre-qualifications. He was the rising star of this week, making his first and really strong impression at an international event. Throughout the week he was riding very consistently and landing all his runs. Next to newcomers like Ilkka-Eemeli and Stale Sandbech (NOR), were also some of Europe’s top riders like Peetu Piiroinen (FIN) and Iouri Podladtchikov (SUI). The event also saw legendary riders like Gian Simmen (SUI) – the first ever Olympic Halfpipe Champion – and Xaver Hoffmann from Germany, make an appearance in the finals today. The 8th and final day of the BEO received another sunny day, which secured a perfect setup to wrap up a great event week. 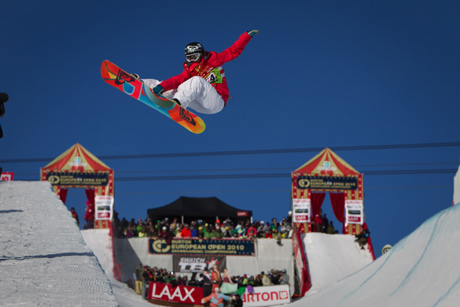 In the women’s field it was Ursina Haller from Switzerland, who just won the O’Neill Evolution last week in Davos, who took over the early lead after the first run. Then it was Paulina Ligocka, who secured the victory with her second run that started off with a frontside 900, followed by a backside air, a crail, a tailgrab, a frontside 720 and a cab 360 shifty. Paulina said: “It was a risk to do the 900 on the first hit, I was so happy I landed it.” 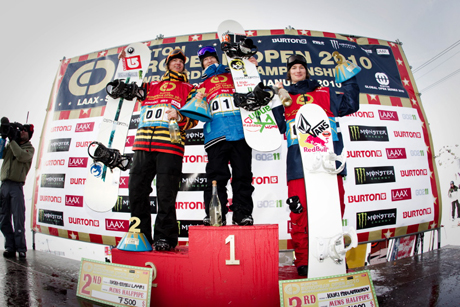 On the men’s side it wasn’t until the final runs that the podium was decided. It seemed that a double-cork was needed to place top 3 today. 3rd placed Iouri had this to say about the trick: “The double-cork is very important, since only a few riders can do it, but I think it’s still all about the whole run, about style, variety and amplitude.” Semi-Finals winner Ilkka-Eemeli Laari took the lead early in the contest with an insane first run that put him in 1st. His first run included a backside 540 mute, a frontside 12 tailgrab, a backside air, a frontside double cork 10 and finished with a haakon flip. Peetu went huge in his first two runs on the first hit, trying to stomp the cab double cork 10 on the 2nd hit. He brought some suspense into the finals when he fell during both of his double-cork attempts in the first two runs. Peetu proved he has nerves of steel when he dropped in for his third and final run and put it all on the line. He was first to drop in for the 3rd run and started off with a huge frontside 720 mute and then the crowd went wild when he finally stomped a massive cab double cork 1080! He continued his run with a frontside 9, a backside air and finished off with a backside alley oop 540 tailgrab. This set the stage for the rest of the riders who had to step it up on their last runs to try and take the lead. Swiss Olympic hopeful Iouri Podladtchikov jumped on to the podium with his last run, where he did a huge cab double cork 10 on the first hit, just edging out Stale Sandbech who had been sitting in 3rd. Peetu said: “I went big in my final run, it was hard to beat Ilkka-Eemeli and Iouri today.” Ilkka-Eemeli had the following to add: “I feel great! I’m very happy with the Finnish double-victory! I love this event, the atmosphere is so great, Laax has the best pipe I’ve ridden so far this year.” 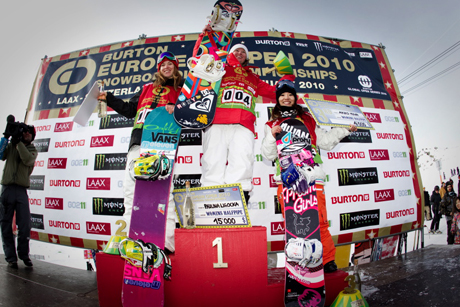 After eight days packed with thrilling competitions, we have seen new faces like Gjermund Braaten, Ilkka-Eemeli Laari and Enni Rukajärvi as well as well-known riders on the podium. The 11th Burton European Open is over and everyone is ready to hear “The Sounds” live-in-concert tonight at the Riders Palace Club to celebrate another great BEO here in LAAX. Thanks to all the riders who made this week unforgettable.

In other BGOS news, the third stop of the Burton Global Open Series – the Canadian Open – will take from Feb. 1-7, 2010 at WinSport Canada’s Canada Olympic Park in Calgary, Alberta.

To re-live the action from the 11th Annual BEO, tune in to Go211.com to watch event replays.