From the very moment the Big Bang gave place to everything we see and everything we touch, to all of this which, finally, is what we are and feel; the beauty itself, the natural resources and their geographical position in this world have been just a matter of luck.

The exact location of a mine is just as random as the size and shape of a mountain or the position of the poles.

The same occurred with everything else, the landscapes, the color of the water, the life that blossomed everywhere. To think that the fact of being a fisherman or a rock-climber has also been written since that first explosion is not as mad as it seems. 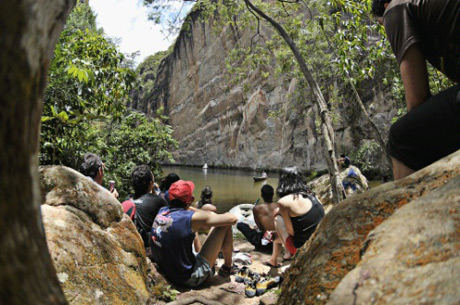 In a Colombian hidden place called Prado, just four hours away from Bogotá, nature – assisted by man’s work – has created a beautiful landscape in a hydroelectric dam where water sports have always been a constant feature. During a September day in 2010, a group of rock-climbers arrived to face the unknown.

Two special guests would lead the adventure. The Red Bull Psicobloc would put the athletes’ courage to the test while exploring the conditions of a young rock in a very unique and special location.

Prado, in Colombia’s Tolima state, was discovered in the year of 1545 and officially founded in 1781. Initially it was only a small village inhabited by an indigenous tribe called Poicos, who lived there between two adjacent rivers, the Negro and Cunday, until the Spaniards arrived in the XVI century.

Years later, on March 1st 1959, in this very same place, the construction of the Hidroprado Dam, which would also be called Colombia’s inner sea, started. It took thirteen years before a new marvel was born.

The scenery chosen by the group of rock-climbers was a spot favored by creation itself inside that amazing sea. An enormous spring, located 15 meters above the dam’s level, is known by the locals as the Enchanted Lake.

It is also a fisherman’s backyard, who shares the area with monkeys, small crocodiles, wild birds and all sorts of inhabitant insects of this place: his paradise.

“This is a landscape that has been here for a long time, even before the dam was built. It has always been here,” Says Don Julio, who knows every corner of its jungle and its waters. He, who has spent his whole life there, is still amazed by the greatness of a rock wall over 80 meters high that expands itself from south to north over his lake. 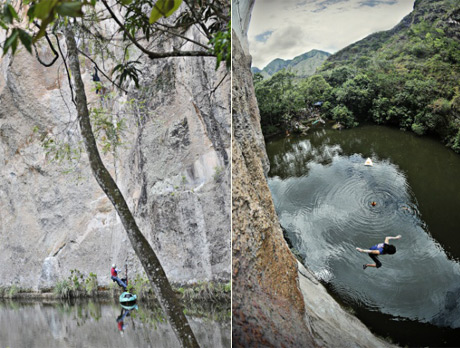 “They call it enchanted because when you look at it you simply fall in love with it,” he says. He also thinks it could be called enchanted because it changes colors sometimes or because it gets agitated when someone bothers it. On that giant wall that everyone loves, Don Julio has only seen nesting parrots. Never thought someone would ever have anything else to do there.

Climbing mountains is as old as man itself. For whatever reason, we have always wanted or needed to conquer them. Religion has pushed us to build temples on giant monoliths like the ones in Meteora. Science has wanted to know what happens to our bodies the higher we go, and adrenaline is the fuel that drives athletes who have made danger a form of quiet pleasure.

Four hundred years before Christ, watercolor paintings from China depict men hanging from rocks near their villages. In the XXI century, two of the best climbers in the world would visit Prado to awe and be awed. It would be a new conquest.

Iker and Eneko Pou, two Basque brothers, climbers, born to do this, don’t remember the exact date in which they had their first contact with the mountain. They say their father was responsible for that. They also remember that at fifteen they already knew that going up, and nothing more than going up, would be the biggest part of their lives. Since then, they have only lived the demand and success of their sport.

During the last twelve years, all of their projects, as ambitious as they might have been, have culminated with strength and great skill. “Seven walls, seven continents”, “Expedition Antarctica” and “Orbayu, the hardest big wall on the planet” are some of the names of the victories that they gather today.

Psicobloc, as a discipline of sports climbing, is not even thirty years old. The English coasts, and especially the ones in the island of Mallorca, were the first scenarios in which some found the way of doing a “free solo” of up to twenty meters with water as their crash pad. A gigantic challenge for the mind more than it is for the muscles of those who try it. Iker and Eneko are considered remarkable in this field too.

The geological description of the wall of the Enchanted Lake says that it’s a block of sedimentary rock. Not exactly the ideal type of formation for climbing but one that doesn’t make the task impossible either. It is what nature has given us. Victor, Jairo, Jorge, Richi and Toño are the Colombian climbers responsible for mastering and finding the way of making it climbable.

Lots of strings, two drills, hundreds of kilograms of equipment and up to 12 hours of daily work in amazing tropical weather were what it took to prepare it and set it up for psicobloc. “It’s an unstable ground,” the routers agreed after five days of a great job during which they opened the five routes of up to twenty meters, which the Pou brothers and the Colombian climbers invited by Red Bull, would dare to challenge for the first time in their lives. 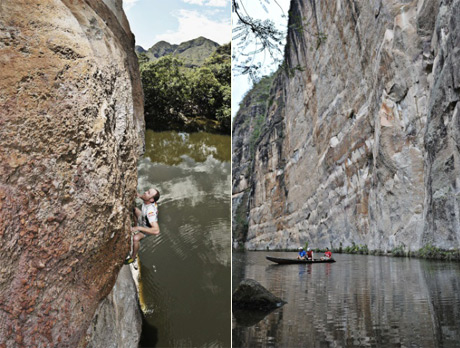 One day before the competition, Iker and Eneko enjoy an afternoon alone with the rock. They are amazed by the place and by the difference of this particular task. They predict that everyone will have fun. Next day, they introduce psicobloc to the twenty participants before taking their place as jurors of the competition. Each one of them performs two routes that inspire the first-timers. “It’s a complicated psicobloc you have right here,” said Iker. “Usually we do it on overhanging rock, here you have a plate”. “Besides, there is no reward,” jokes Eneko. “You reach the top and there’s nothing to do, you have to fall”.

Participants make their attempts. Iker and Eneko motivate them all without exception, shouting at them. It seems as though they inspire them to go on and want to chain the entire wall. Don Julio doesn’t believe what he sees. The athletes can’t believe what they’re living. After nine hours the event ends. It’s fair to say that all of them were above their own level on the day and time they were supposed to be. The rock behaved itself. In addition to good climbing, the best and freshest falls were seen. The experience was supernatural. Everyone described it this way. The Red Bull Psicobloc event left two winners, a man and a woman in each category. Then came a happy way back home.

Thirteen thousand seven hundred million years have passed since the great Big Bang. Five thousand million since the earth became a planet. Day after day galaxies distance themselves from each other, rocks are compacted at the speed of infinite patience and men have searched restlessly to be what their historic moment requires of them. The hundred millions of years that have seen the Andes form themselves are few for the hardness of the rock that we challenged today. Maybe it will take another hundred million years to make it perfect. For now, it wouldn’t be pretentious to say that a group of Colombians and two Spanish friends were able, without any doubt, to get well ahead of their own time and history.