The course has been built, the athletes have arrived and now just days remain before the ultimate test in downhill freeride mountain biking takes place during Red Bull Rampage. With lines taking shape and an evolving rider list, the story is just beginning to unfold. 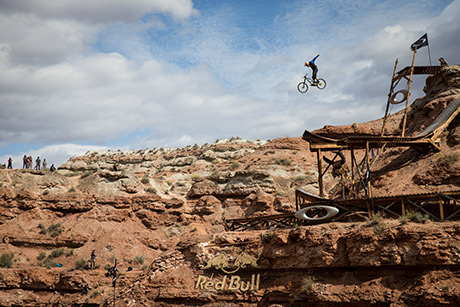 Here are some of the top stories to watch this weekend:

FMB Title Up in the Air
Red Bull Rampage serves as the final event in the diamond series of the Freeride Mountain Bike World Tour, and with several of the top athletes in a tight point chase, it’s all up for grabs on Sunday. Brandon Semenuk is currently in the lead and is coming off a hot streak, with wins at Red Bull Joyride and District Ride, and a second place at the Bearclaw Invitational. He’s got all the momentum, but don’t count out Brett Rheeder and Thomas Genon who are within range to nab the title. With such a close points differential, the only thing guaranteed at the Finals is a showdown with the title on the line.

Rookie Riders, Virgin Course
This event could be dubbed the year of the new – a new venue, and new crop of riders making their first runs ever at the event. Due to some injuries during recent events and some additional schedule conflicts, several of the usual names (Cam McCaul, Logan Binggeli, Darren Berrecloth) will not be participating. This opens up the opportunity for 10 new rookies, including World Cup racer Bernard Kerr who is shaping up a line that could be the quickest in Rampage history. Joining him in the first timers club are riders including teenager Nicholi Rogatkin who has his father on his build crew by his side, and Kyle Jameson, who last year was part of previous champion Brandon Semenuk’s building crew, and now will be dropping in to his own line.

Four is the Loneliest Number
It’s almost become the one certainty of Red Bull Rampage, Spanish rider Andreu Lacondeguy ending the event in 4th place. For three years running the star athlete has found himself just one spot shy of the podium. Last year’s event was the ultimate tease – after finally bumping himself into the third position during the second run, the entire score was nullified after high winds forced the cancellation of the second run for the rest of the field. Organizers had no choice but to revert back to first run scores to determine the victor. And yes – Andreu’s first run had him in 4th place. Can he finally break the curse, or will it be 4 x 4 for the outspoken powerhouse?

The Venue Trifecta
Kyle Strait became the first athlete in Red Bull Rampage history to win the event twice last year when he took home the title nine years after his first victory. This year he has the chance to step the feat up a notch and win the event in all three locations – the original venue from 2004, the “Evolution” venue used from 2008-2013 and now, the new backside venue awaiting its first champion.

The action kicks off on September 26th with the prelims, where 27 athletes will vie for the remaining 10 spots in the finals. Ten athletes, including Semenuk, Strait and Lacondeguy are pre qualified to the finals, which will be webcast live at 1pm MT on Sunday, September 28th at redbull.com/rampage.

The mountain biking competition is part of the Red Bull Signature Series, the most progressive collection of action sports events in the world, all airing on NBC. Tune in on Sunday, December 27th at 4pm EST and catch the Signature Series broadcast of Red Bull Rampage. The show is brought to a national audience in partnership with Dodge Dart, GoPro, Polaris RZR, The Army National Guard, and the Utah Sports Commission.

Find all the event details, including an inside look at the build so far and much more at Redbull.com/Rampage.