There’s a sign at the entrance to the basketball court at the Lake Ainsworth Sport and Recreation facility near Byron Bay, Australia that reads, “No Skateboarding!”  Which is ironic really, given that half the court lies hidden beneath one of the most unique skateboard ramps in the world.
The ramp boasts two roll-ins that dip down from opposite sides toward symmetrical wave-shaped bowls. The bowls propel the rider towards ‘lips’ which sit at a mellow 30-degrees and can be attacked frontside or backside. Beyond these, a large pit awaits, filled with spongy cubes of foam, the kind daring freeride moto-x freaks use to cushion their falls when practicing new tricks. Measuring seven-feet at its highest point, the ramp is embryonic compared to the awe-inspiring creations of the X-Games and Dew Tours, but it has not been designed for skateboarders. 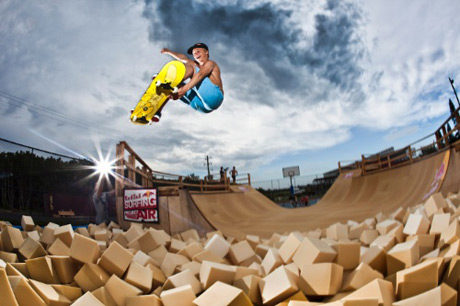 No, this ramp has been designed for surf-stars and Red Bull Surfing’s Project Air has drawn them in droves. There’s Mick Fanning from the Gold Coast, the reigning two-time Men’s ASP World Champion. There’s former Women’s World Champion Sofia Mulanovich from Peru. Young Aussie superstars Sally Fitzgibbons and Julian Wilson are both in attendance. Then there’s the Tahitian ‘Spartan’ Michel Bourez, Frenchman Tim Boal and South Africa’s wunderkind, Jordy Smith. Plus a heap of Red Bull’s junior team.  It’s an inspiring talent pool to say the least, bubbling to the point of overflow.

Next to the ramp is a bungy trampoline, which if you’ve never seen one is really something else. With its mess of legs and cables jutting awkwardly skyward, it kind of resembles a giant spider and is a training apparatus more common to sports like gymnastics. Appropriately harnessed, it allows athletes to leap and perform multiple backward and forward flips. According to people that know, like Red Bull’s High Performance Coach, Per Lundstam and High Performance Manager, Andy Walshe, who share around 20 years experience training with Olympic athletes, the bungy tramp is an excellent way to finetune one’s spatial awareness, and even if you make mistakes you never seem to land flat on your face. 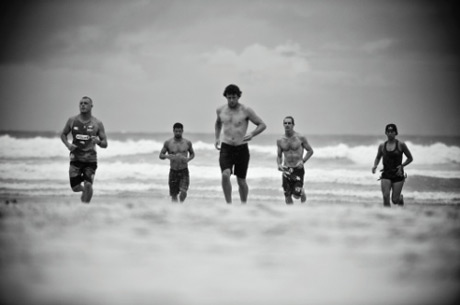 Not far away, waiting just above the high-tide line on a long stretch of deserted beach are two jet skis fitted with water-ski style tow-ropes. Boasting a grunt-worthy 240 horsepower engine each, they’re aquatic beasts that have more than enough muscle to whip even the world’s heaviest surfers, like Jordy, into anything resembling a wave at speeds they could never acquire by natural means. And assuming your pilot likes you and has nothing better to do, they’ll whip you into more waves in 20mins than you could catch on any crowded day.   At a glance – and it attracted many from curious local residents – Lake Ainsworth has been transformed into a veritable surfing wonderland.

The underlying premise of Red Bull Surfing Project Air is simple enough; via repetition and guidance within a controlled environment, the surfers will be able to attempt and refine aerials that would require months or even years of unaided effort in the open water. Borrowing training concepts first introduced when Red Bull built double Olympic gold medal winner Shaun White a private half pipe in the Utah mountains, Red Bull Surfing Project Air is an evolution of the company’s pioneering effort with its surfers last year in Indonesia’s Mentawai Islands. There the surfing performance coaches championed the introduction of GPS technology to measure paddle speeds, wave velocity and maneuver trajectories, along with hydration and lactic acid tests to measure the surfers’ fitness and recovery rates. At the height of the venture, superstar Jordy also pulled off one of the most stunning moves ever executed in the sport; a twisting, corked rodeo flip. Captured by cameramen using state-of-the-art high-speed equipment, the vision won “Clip of the Year” at the industry’s esteemed Surfer Poll awards night, yet more ominously, Jordy’s feat signaled the beginning of a new wave in performance surfing. 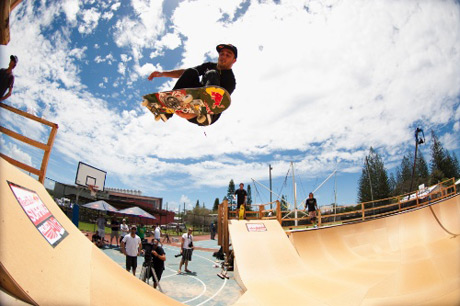 Surf Coach Andy King was along for the ride in the Mentawais and also spent an enviable 10 months traveling the 2009 Association of Surfing Professionals (ASP) Men’s World Tour. Beyond the glitzy facade of exotic locales and big-money rivalries, King uncovered a rift that exists between the sport’s most technically adept performers and an outmoded judging criteria. “What shocked me most was the frustration and resentment so many guys had towards the judges and the judging system,” explains King, who as a former competitor sympathizes with the highs and lows of his bunch. “There are the World Champions of the sport, like Mick (Fanning), who see it for what it is and have worked out how to play the game and have mastered it. Then there are the young crew coming through, like Jordy, who are bringing with them entirely new moves but are not necessarily being rewarded for them, or they haven’t perfected them to the point where they’re willing to risk them in competition. So what we decided was to continue to build on the mental and physical aspects we touched on in the Mentawais, but also introduce more technical elements based around the aerial; which is what we’ve done to an extent by bringing in the bungy tramp and the customized skate ramp.”

The timing of Red Bull Surfing’s Project Air is auspicious. At the end of the 2009 season, an ASP committee that included surfers’ representatives and the judges, reviewed and amended the criteria to include elements such as “flow” and “variety”. Plus in 2010 they will apply a greater emphasis to “innovative and progressive maneuvers”. A press statement from the ASP included a comment from then Head Judge, Perry Hatchet: “It’s paramount that the ASP Judging Criteria evolve to reflect the ever-progressing envelope of high-performance surfing.” Depending on whom you talk too, however, opinion is still divided on what the best or “ever progressing” surfing entails. 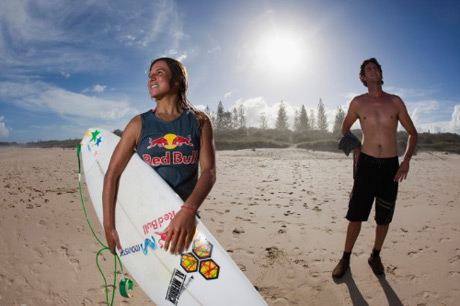 Aspiring grommets, like 15 year-old Kolohe Andino, who traveled from the USA to attend the Red Bull Surfing Project Air camp, unabashedly picks holes in the system. He may still be too young to drive, yet Kolohe is already learning to fly, metaphorically speaking of course. “I think right now, the judges don’t discriminate enough. The more technical you are, the higher you should be scored. If someone does a stalefish grab, which is probably the hardest grab to do and someone else does an air reverse, they would probably give them the same score. But it should be a three-point spread, at least. It’s probably just because they (the judges) don’t know the difference,” he states.

Mick Fanning, the reigning Men’s World Champion is slightly more diplomatic.  “It’s natural that we look to the surfers who have come before us and then try to put our own spin on things. It’s evolution. But I also look at what younger guys like Julian (Wilson) and Jordy are doing in the air and knowing they can do crazy flips and stuff, it definitely opens your blinkers. And kids like Kolohe are probably looking at them too and going, ‘Oh, I can do it better than that!’ It’s progression in sport, but there’s always that tendency for young crew to learn to run before they can walk. You need to have the complete package.”

With just two weeks before he paddles out at his homebreak of Snapper Rocks to begin his third title defense, Fanning is having a blast on the imported toys, but is still taking precautions. On the ramp he dons wrist protectors, knee and elbow pads, as do most of the elite crew. Jordy’s a little more confident and reveals that he used to skate quite a bit when he was a kid, even if it has been a few years. After a cautious start, it’s not long before the big South African is sweating up a storm.

The grommets, however, dive straight in. Kolohe, Conner Coffin and Evan Geiselman, all from the USA, have grown up with skateboard ramps in their backyards and they’re not even wearing t-shirts, let alone helmets or any protective padding. As they go trick for trick, attempting all manner of grabs and the occasional bold variation that they’re forced to abort, they’re heckling the hell out of each other. It certainly appears as if they’ve the potential to change the sport, even if it will take them a few more years of running.

But hands-down the greatest progress come from the girls, Sofia Mulanovich and Sally Fitzgibbons. Sofia graduates from “petrified” and “shi!#ing myself” to rolling in and airing into the pit with just a few days of practice, while via Sally we see the purist intentions of the camp truly manifest. Literally within minutes of executing a clean ‘Indy’ grab into the foam pit one afternoon, Sally swaps her helmet and skateboard for a wetsuit and surfboard, and replicates the move with flawless precision in the briny after being whipped into a wave by a jet ski. The move elicits a wild round of hoots from the gallery assembled on shore to watch.

“The idea for us is to just put these sorts of things in front of them so they can get a taste; but really we’re just scratching the surface with this,” explains Walshe, who usually cheers loudest when he spots progress. But in this instance, the loudest applause is from Sally’s peers, including World Champ Fanning and Jordy, the bloke responsible for the perfect rodeo flip. If someone asked you if Red Bull Surfing’s Project Air experiment is working, what more proof would you need?