When the Eurobike premiered 25 years ago, more than anything else mountain bikes were at the center of the young Lake Constance bike expo. Since then, the Eurobike has become the leading trade exhibition for the entire bicycle market. The sport of mountain biking is not just an important market segment, but also a driving force in the development of new bicycle technologies. This is clear at the upcoming Eurobike, which takes place from August 31 to September 4, 2016, when the focus will be on the new innovations for the 2017 model year. During this year’s two Festival Days, not just looking, but trying things out will be on the agenda. 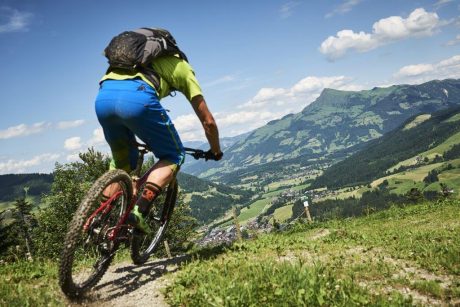 The 1991 Eurobike: Mountain bike fever has swept Europe. The new sports trend had only just crossed the Atlantic from America to Europe a few years before and for the first time, the young mountain bike community had its own European gathering, the new trade show at Lake Constance. At its core, the sport of mountain biking has remained unchanged during the past 25 years: you ride up and down a mountain on dirt trails. But some things have changed: whereas 25 years ago a 40 kilometer tour would have been considered long, today the Alps are crossed in multi-day tours. Back then, mountain biking pioneers would have only dared to traverse some trails on foot with their bikes over their shoulder, but today these trails are considered unproblematic for riders. This development is due not least to advances in bike technology, for example with powerful suspensions and better brakes, tires and gear shifts that have steadily expanded the limits of what is possible on the seat of a mountain bike year after year.
For model year 2017, which bike manufacturers will present for the first time at the Eurobike, electronically-managed gear shifts will again be at the center of attention. This technology is not completely new to the bicycle market. In the racing bike segment, athletes have long been using electronic cables or wireless connections to transmit shift commands to the gears. In the mountain bike segment as well, the XTR line from Shimano has already been available as a high-end electronic gear shift for mountain bikes this year. An exciting development for 2017 is the decision by the company to introduce this technology at lower price ranges. The XT line will still be in the upper segment of the Shimano hierarchy, but will cost only about half as much as the exclusive XTR line. 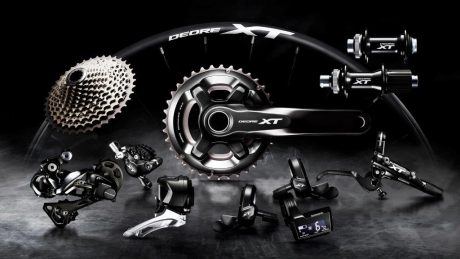 One chainring with a large spectrum
Sram, a competitor of Shimano, is pursuing a somewhat different philosophy in the mountain bike segment. The American company‘s mastery of electronic gear shifts has already been more than proven in the racing bike segment. Sram continues to rely on the mechanical transmission of shifting impulses in shifting technology for off-road applications. Despite this, the bike supplier’s engineers may have launched the innovation of the coming season: with the 2017 model year, Sram is doing away with multiple front chainrings completely. Instead, there will be a single front chainring and a sprocket set on the rear wheel with twelve gears and a correspondingly huge range of gear ratios. The smallest sprocket has only 10 teeth and the largest an impressive 50. That doesn’t only sound big, it is also has an unusually large appearance. However, the result is a gear ratio range of 500 percent, completely eliminating any fear of long uphill climbs. By the way, the Eagle XX1 will also be one of the lightest gear shifts for bikes on the market.

Shock absorbers that automatically adjust themselves
The American company not only produces gear shifts for bikes, but through its brand RockShox is also the market leader in sporty suspension technology. As the performance of suspension systems for mountain bikes grows and grows, the complexity of the settings and calibration required also rises. Many different settings make it possible to adjust modern suspension forks and rear wheel shock absorbers to fit the route, rider weight, riding style and other parameters. Recently, the Australian start-up Dusty Dynamics, which was just bought out by Sram a few days ago, proved with its ShockWiz technology that it can also be very simple to calibrate the suspension. Behind this technology is a module that is mounted on the fork or rear frame and which is connected to the air chambers in the shock absorbing components via a pneumatic tube.

Bike packing on mild summer nights
Instead of ending the bike ride at home, you unroll your sleeping bag in the forest. Anyone who wants to can take a light tent; on warm summer evenings the star-filled sky can be all the roof you need. “Bike packing” is the specific term for such short adventures. At the Eurobike, several exhibitors will be using product innovations to target this new trend. For example, at Ortlieb bike packers will find a new compact bag series that offers space for everything that you need to spend the night in the forest. The American bike brand Surly (which can be found at the Eurobike at the Cosmic Sports stand) has recently begun producing bikes that are especially made for bike packers.

Hands-on test rides permitted!
By the way, exhibitors are not the only ones offering innovations at this year’s Eurobike. The exhibition itself is launching an exciting new concept in the form of Festival Days. This year, instead of having just one public day on Saturday, which used to be the last day of the show, the Eurobike will be open to consumers on two days for the first time. With the arrival of the new Festival Days on Saturday and Sunday, September 3 and 4, the Eurobike will become a big party for all bicycle fans. In addition, during Festival Days many Eurobike exhibitors will not only make their new products available for visitors to look at, but to try out as well.