Even for 2007 the Skipass show has come to an end. We were there to be your eyes.
Unlike its absence in 2006, Burton was present and stronger than ever. Thanks to it, Vans and Fiat the jackpot was rich, reason why a lot of international riders were ready and steady at the starting line of the several snowboard, freeski and skate contests.

Stefan Maurer (Swiss Global Team Burton skater) with his double backflip was the king of Burton Big Air Pro contest . This time the structure with its jump let the riders fly up with very stylish and complex tricks, even though its shape didn’t allow the public to fully enjoy their lines.

The Rail Pro snowboard contest’s bank was broken by Marc Swoboda (Austrian Nitro team’s member), followed by Giorgio Morrel (Bataleon) and Max Galfrè (Nike ACG / Oakley). The challenge reached a top level, as all the contenders did their best to be the first.

On Sunday we assisted to the Nitro team Battle, witnessing the victory of the guys from Bataleon team followed by the Nitro team, the Static team (3rd place ) and the Venue team ( 4th place ).

From the Pro ski contest JP Furrer (Volkl) came out first in the Top Down Free sky Pro contest! Patrik Pattori (K2) stubbornly fought to support the Italian bravery and to contend with the Swiss for the first place, finally obtaining an important 2nd place. 3rd place to Pako Benguerel, Spanish skier from Amplid team.

Then came the moment of Vans MiniMega Ramp Contest, where Giorgio Zattoni duelled until the last breath with Jussi Korhonen, finally ruling. Even Matteo Storelli, Luca Basilico and “the gipsy” Beppe Taccori showed their best and pushed hard. What a pity for Daniel Cardone, injured on Saturday during the “warm up” and unable to take part to the finals.
On the same structure Ale Barbero amazed the public the 4 days long together with his crew: absurd and impossible tricks, backflips of any kind, and a heart-attack session on a double line with Zattoni. 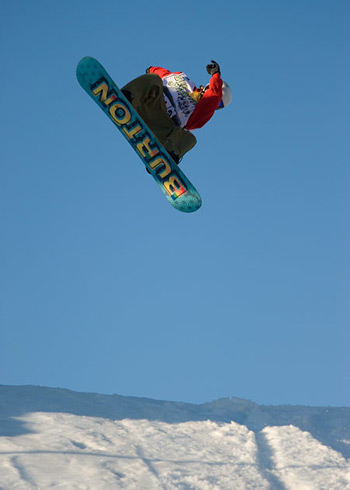 Do you think it could be over?
Meanwhile, the FMX Daboot crew leaded by Alvaro Dal Farra grabbed the attention of the visitors twice a day, who couldn’t help remaining mouth-opened with their heads turned to the sky and wide-open eyes. Everyone who followed their evolution in years of shows could doubtlessly confirm that the riders’ technical level has incredibly increased, mostly from 2006.

Want more? Here they are! Besides contests and demos, video premieres, the Special Blend one ( First chair, Last Call ) and the Daboot one over all.

For you, Behind turned up everywhere to leave its tracks, stickers, 4 reporters highlighting the juicy and most curios spots. Keep your eyes open, for our photobooks will show up in the next days. 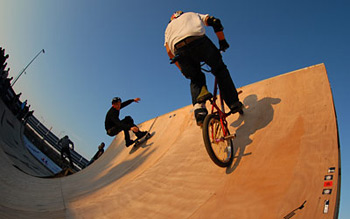 Summing up: a lot of international more than skilled athletes in the snowboard contests, a huger and huger number of talented and insane freeskiers, a renewed and superfunny skate ramp ( ridden from the first second to the last instant of the exhibition ) and stream of people crumbling the past records ( 110.000 visitors ). Thumb up!