Skullcandy, a developer of core audio products, is thrilled to announce its partnership with Snoop Dogg, for the icon’s first artist headphone, being released nationally in the spring. The first headphone of the Snoop Dogg/Skullcandy line, introduces Snoop fans to a whole new world of music listening as they partner with the rapper for his own Skullcrusher—an extreme base amplified headphone.
The Doggfather himself said, “The Snoop Dogg Skullcrusher is the hottest headphone comin’ to a hood near you. I’ve been a fan of their products for years and I decided it was time to break bread with them. Our headphones are fly, affordable, and most importantly – bangin’ like Niggaracci beats. Make sure to scoop a pair in Spring 2009 and be on the lookout for more Snoop Dogg/Skull Candy products, ya dig?!?”

Looking to offer his fans the best of music listening, Snoop partnered with Skullcandy to bring a high-quality headphone at an affordable price (79.95€) to the hip-hop world. A Skullcandy fan for years, the seventeen-year hip-hop legend, looks to introduce Snoop fans to a shock-and-awe level of bass with 30mm neodymium magnetic speakers plus mini-sub woofers, allowing his listeners to take Snoop wherever they go. The release of the “Snoop Crusher” comes on the heels of Skullcandy’s latest artist collaboration with metal legend Metallica. 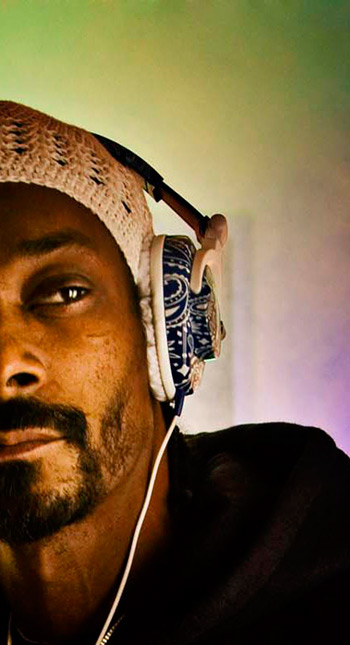 “Skullcandy has been Snoop fans since the beginning. We’re psyched to have the opportunity to bring our Skullcrusher, a hip-hop specific headphone, to Snoop Dogg fans everywhere,” stated Rick Alden, CEO and founder of Skullcandy. “It’s exciting to work with such a talented artist and be a part of creating his own line of headphones. This is a collaboration that both Snoop Dogg and Skullcandy fans will be anxious for.”

The new Snoop Dogg Skullcrusher will be available in the spring at Skullcandy dealers and at SnoopDogg.com.