In the true spirit of the Superenduro Euro Cup fuelled by Monster Energy today, july 12th, riders from the host nations of the three races filled the overall podium in Orcieres 1850, France, after the second round of the series and third round of the RiderZ Cup.

French rider Damien Oton was on the highest step today, followed by the swiss Florian Golay and italian Marco Rodolico, who retains the series leadership closely followed by Golay.

After the fresh cut singeltrack in Sauze d’Oulx green forests the race in Orcieres 1850 was all about high alpine peaks, tight trails, challenging traverses, loose berms and epic views.

From the start in the center of the famous resort Orcieres 1850 the more 250 plus riders in attendance took on two chairlifts up to over 2600m, then onto a half pedal-half hike along a bench cut and rock garden to the start of the first special stage, which then brought down to a fast, “kamikaze” style second special stage almost back to town and then up again on the first chairlift for the third and final special stage, which was held mainly on the trails of the Orcieres Bike Park. 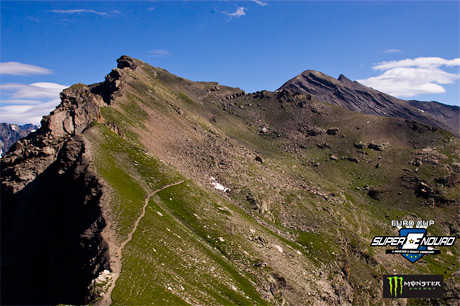 The terrain and duration of this race called for a display of bike bike handling skill and quickness on the downhills, while fitness and stamina weren’t as crucial as in Sauze, as much as the need for the riders to quickly adapt to a high altitude environment, not shying away from hiking a massive boulder field while carrying their bike and navigating in fast, open terrain.

As per the Euro Cup rules, each race’s categories are those of the respective national series, so the winner of the RiderZ Cup “Masters” category is the same of the overall ranking, Damien Oton, while the “Kid” category was won by Aurele Arnaud (FRA), the “Veteran” by Emile Julia (FRA), and the “Feminine” (womens) was taken by Orcieres local Alizee Baron, with the american racer Liana Gregory in third. Winner of the “Handiriders” category was Maarten Kuypers: it is truly notable that the RiderZ Cup, the french series which hosted the Superenduro Euro Cup fuelled by Monster Energy, is one of the few mountain bike racing series in the world to have a category dedicated solely to disabled riders.

Marco Rodolico of Italy consolidates his series lead after the first place in Sauze d’Oulx and the third here in Orcieres, and it’s now on to the third and final stage of the Superenduro Euro Cup fuelled by Monster Energy which will take place in Torgon, Switzerland, on august 8th and 9th. Torgon is situated in the famous Portes Du Soleil resort and it’s renowned as a prime location for enduro riding, so expect an epic race and some close results to see who will claim the first title of the Superenduro Euro Cup!