The Playground indoor skate park in Aurich almost burst at its seams: more than 120 pros and amateurs participated in the Telekom Local Support Skateboard Challenge which was also the final stop of the Adio COS Cup tour.

In some cases the trip up north was a pretty long one but it was definitely worth it for the best German pros and rookies: they can now not only look back to a setup unrivaled by in Germany but also some amazing skateboarding with exciting battles during the Telekom Local Support Skateboard Challenge and, last but not least the German Championships.

After three qualification rounds the best of the best had to battle it out in the finals. But they were not alone: thanks to the „pick-your-partner“ format the contest riders could not only accumulate points for their own individual rating but team up with a buddy to compete with for their local spot. During the battle for the spot support creative lines or synchronized tricks were awarded extra points.

Within the pro division it was Alex Mizurov and Yannick Schall who convinced with a train full of tricks. They are now going to invest their 3.500 € spot support into the indoor skate park in Karlsruhe. Team Thomas Weber/Thomas Meinel from Plauen came second; Christian Krause/Kerem Elver from Münster third. 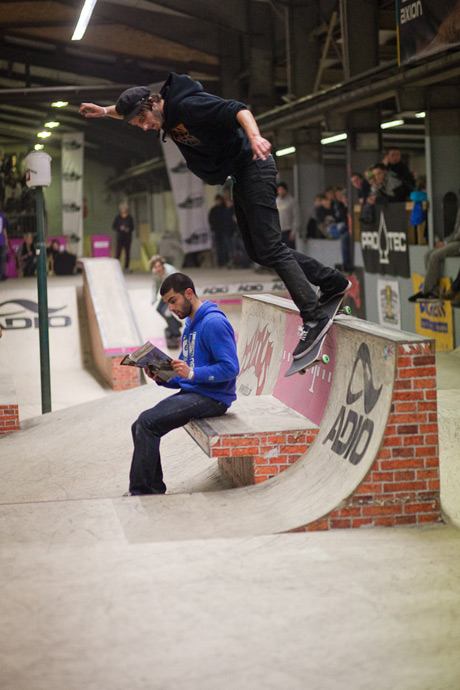 In the amateur division Marius Kolkmeyer and Hendrik Kaczmarek from Osnabrück impressed the judges and won the financial support worth 2.000 € which will go towards their local skate park. In addition to that, the happy winners received tons of stuff from Pro-tec, the Fiat Freestyle Team and Titus. Team Thorsten Ballhaus/Octavio Trinade came second just before Moritz Huesmann and Dennis Klüssendorf.

Besides the team rating it was all about the German Championships and the qualification for the Telekom Extreme Playgrounds on December 5th 2010 in Berlin. In the individual rating it was Alex Mizurov, already a set rider for Berlin, who made it to the top and who, even though having won the German Championships twice already (!) had never won an Adio COS Cup Series stop! Thomas Weber came second and therewith secured the German championship title 2010. Tom Kleinschmidt and Christian Krause came third and forth. 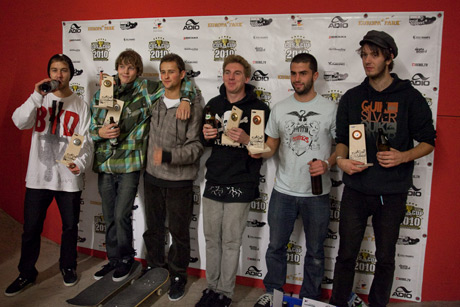 All four will now enter into the battle for the $ 20.000 prize money at the Telekom Extreme Playgrounds in Berlin. They will be accompanied by the 22 years old amateur Marius Kolkmeyer, who will now have to proof himself against riders such as Axel Cruysbergh and Rodolfo Ramos in front of 5000 spectators at the Velodrom in Berlin.