On 5th of March, 2016 it’s on: the longed-for final of the Red Bull Station Riots takes place in Snowpark Nesselwang and the ongoing fight for the domination of the hood comes to a fulminant end. All six winners of the qualifying event as well as the winner of GoPro’s video contest are going to challenge the world’s big names of street snowboarding for the title „king of the hood“.

Nejc Ferjan (SLO), Ziga Rakovec (SLO), Marvin Salmina (AT), Samy Kautner (GER), Elio Fumagalli (SUI) und Max Zebe (ITA) are the lucky winners of Red Bull Station Riots’ qualifying event presented by Nitro Snowboards & Volcom. They all have to compete against the who is who of world’s best street snowboarders at 06.00pm if they want to call themselves the „king of the hood“. The Slovenian crowd pleaser Nejc Ferjan already set the level very high with his winning line at the qualifying event (Barriers: Switch Fs Tailslide 270 off – Rail-Combo: Cab 270 Fs Boardslide – Chain: Halfcab – Speed Bumb: Backflip – Stairset: Bs 180 Switch 50-50 Bs 180 off).

But one thing is sure: the participating shred kings like Dylan Alito (USA), Jesse Augustinus (NED), Len Jørgensen (NOR), Jamie Nicholls (GBR), Jesse Paul (USA) etc. are going to shred the hood with even more criminal lines. But not only the athletes are going to have an awesome day in Snowpark Nesselwang. The final of the Red Bull Station Riots is for free so everyone who is interested in seeing world’s best street snowboarders destroying the hood should come to Snowpark Nesselwang on 5th of March, 2016. The contest is going to start at 6.00pm. For all shredders among yourselves the perfectly shaped Snowpark Nesselwang is going to be open before the contest starts and you have the possibility to ride some test-boards and -bindings from Nitro Snowboards for free the whole day. If you need some power for shredding some more lines or just want to have an awesome burger etc. you should come to Röle’s BBQ booth. So culinary enjoyment is guaranteed all day long.

As it’s righteous for “real hood-gangsters”, a riot as it is going to be in Snowpark Nesselwang on 5th of March, 2016 has to end with an awesome party. Therefore everyone is invited to come to the official Red Bull Station Riots party in the old Postbrauerei (only 400m away from Nesselwang’s valley station). Local hero DJ Mittone as well as the Berlin Turntable Hools are going to make the night absolutely unforgettable. For everyone who doesn’t know the Turntable Hools: these guys are a nightmare. 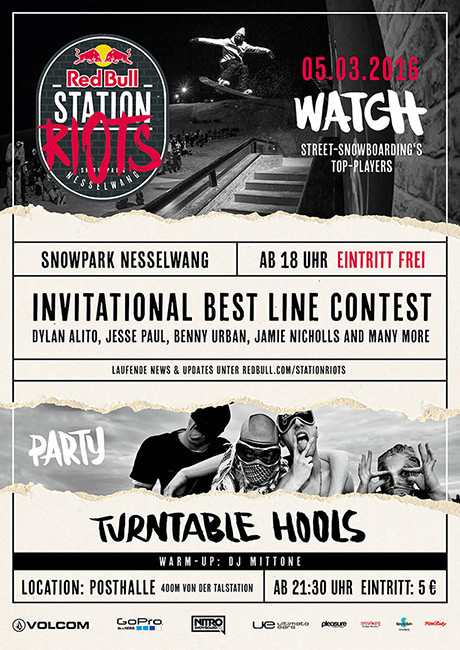 At least if you prefer formally applause rather than jubilation of party people who are about to freak out. But maybe the Turntable Hools are just some guys who are Marvel’s superheroes dressed in trash bags. It doesn’t care if they are a nightmare or superheroes: they are going to make every party location literally explode and their vinyls are going to have one similar and clear message: party, party, party. That’s all that counts. Some more facts: party start 9.30pm, price 5€, minimum age 18 years (bring your ID!).
So you won’t miss anything at the final of the Red Bull Station Riots you better memorize this timetable:
Contest start: 6.00pm
Heat 1: 6.15pm – 7.00pm Heat 2: 7.15pm – 7.55pm Super final: 8.15pm – 8.45pm Price giving: 8.50pm – 8.55pm Party start: 9.30pm
You better make a special note in your calender for Saturday the 5th of March, so you don’t miss that big final of Red Bull’s Station Riots and the official afterparty!