BolognaFiere gives rise to an entirely new event and opens the doors to entertainment. From the 14th to the 16th of June, Bologna Exhibition Centre prepares to host the first Freestyle Festival in Italy, The JamBO, three days of performances, music, art and sport, from 3 pm to 3 am.

Electronic dance music, street art, urban dance, fmx, bmx, skateboarding, football and basketball freestyle, parkour, wakeboarding and surfing for the fist time all together in a big “jam” of decibels and adrenaline.

160 international music, art and action sports icons alternating in a breathtaking program. The three-days opening, with several schedules, are going to be something you can’t miss: every day you can enjoy dj-sets, performances, shows and contests with international artists and athletes, being all freestyle, eclectic and creative at the same time.
The JamBO is an event organized by BolognaFiere, in collaboration with studio Lobo srl.

The JamBO is an event designed by DJs for DJs, by performers for performers, by riders for riders. Music, art and action sports at The JamBO share the same freestyle attitude, a common and special feeling where creativity and expression rise: a way of living and experiencing that affects every aspect of everyday life with a genuine and irrepressible charge. The JamBO is the largest freestyle representation ever realised in Europe, where the international music, art and sport stars’ performances involve the audience in an exciting event. 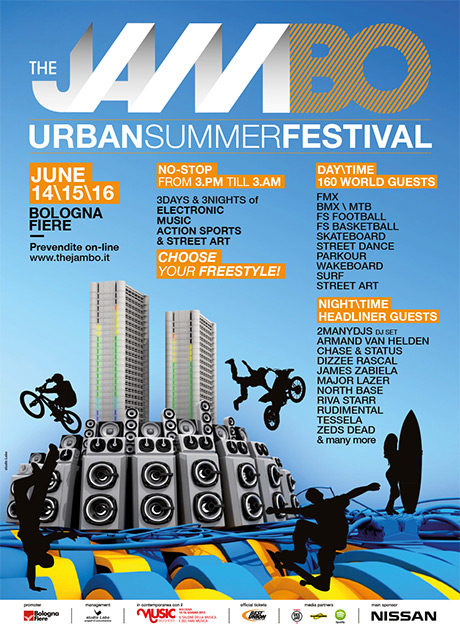 From DJs console to skateboarding vert, passing through the urban areas of street art, dance, parkour, football and basketball freestyle on the ramps of fmx and bmx, and on the wave of surfing and wakeboarding, the event held in BolognaFiere from the 14th to the 16th of June proudly presents international guests and important collaborations.

The soundtrack of The JamBO consists of the performances of DJs and groups selected by Alessio Bertallot: international stars of alternative electronic and dance music such as Major Lazer, Chase & Status, Zeds Dead, 2manydjs, Armand Van Helden, Dizzee Rascal, Riva Starr, Rudimental, North Base, James Zabiela and Tessela. Every day you can attend high level musical performances of international artists who have chosen The JamBO as their only date in Italy.

The Italian sport freestyle icons are event coordinators of the festival disciplines: Alvaro Dal Farra for fmx, “Freestyler of the Year” in 2005 and founder of Da Boot team, star and judge of the most important contest of the world; Alessandro Barbero, essence of the Italian bmx and athlete to beat in international contests; Daniel Cardone, legend of global skateboarding; Lorenzo Pinciroli, the basket star, founder of Da Move team and leader of football and basketball freestyle events all over the world. Moreover Riccardo Chemello of Krap crew, Record Man of Italian parkour; Walter Gianini, leading pro of wakeboarding in global top ranking, and Nicola Bresciani, two-time Italian surfing champion, the lords of the waves.

On the 80 thousand squared meters arena you can enjoy performances and battles of international champions who climbed up the ranks such as Edgar Torronteras (Spain), Andrè Villa (Norwey), Josh Sheehan (Australia), Clinton Moore (Australia) and the High Jump World Champion 2012 Max Bianconcini for fmx. The English Sam Pilgrim, Alistair Whitton and Sam Reynolds, Tj Ellis (USA), Jean-Baptiste Peytavit (Francia) and Nicola Pescetto (Brasile) for bmx. International as well the skaters group who compete on the The JamBO vert. Well known champions like Giorgio Zattoni and the young Alex Sorgente, “a seasoned traveller & a skater” – as he likes to define himself, will compete with athletes of the international scene like the Brazilian Pedro Barros, the Basque Alain Goikoextea and the American Pat Ngoho.