Tell me about the story of the band!
Long story short, we are a band from Turin born in 2015 after years of evolution by performing in Turin and neighbouring provinces. On October 2015, we released the official videoclip of the song “Bring The Light” which presents our first LP “Inhale Exhale”.

What did you do in the last six months?
After completing our LP, we have recorded the videoclip for “Bring The Light” and we have focused on our live performances. We are also working on writing new songs and some new stuff available soon.

What have you got in your wallet now?
Since this was our first experience in a professional studio, we have learned the struggles, responsibilities and pleasures of working on a project of this importance. In this journey we have matured a lot, also thanks to the help from people who are much more experienced than us.

Why have you chosen this name for your band?
On our first day recording at Excess Studio our producer accidentally typed Breathe The Light instead of Bring The Light. Looking back at the title we thought it was a really good name and since we couldn’t use it because it was too similar to the name of our song, we chose to change it in Breathe Me In.

How important is the look/appearance for your band?
Enough, because even if the fundamental thing is delivering good music, gigs nowadays are much more of a spectacle, so it is necessary to have a look right for the stage, without exceeding. 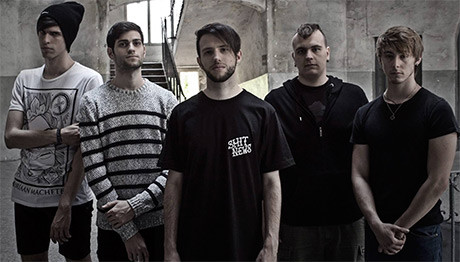 Tell us about the new LP “Inhale Exhale”. Are you fully satisfied with it?
Many songs were in working progress for a long time, but we never got the chance to record them due to a forced pause. At the start of the year we got the chance to finally put these and more songs on CD. We are satisfied with our work, however we regard it as a starting point and not a finish line.

…And the low point?
Due to the fact that the songs vary so much from one another the sound can be perceived by the listener as something confusing and destabilising.

How would you define your sound?
Our style binds together influences from metalcore with dense rhythmic parts of the djent sort, with compositions going from electronic to orchestral, alternating strong melodic features with screams based on post-hardcore.

Metalcore. Describe for me this word! And what do you think, is a good compromise to describe your style?
Defining metalcore today is difficult, due to the fact that a lot of bands are considered such when their styles are completely different from one another. Because of this we find it both hard and easy to consider ourselves metalcore, so we let the audience decide.

What is your idea of perfect happiness?
Succeeding in developing our passion into a successful career.

Tell me some of the bands you admire.
We admire the Italian bands that have been able to bring their music outside of their native country just like Destrage and Upon This Dawning.

What song is in your head right now?
Bring me the Horizon “True Friends”, or the album as a whole.

What is the most embarrassing situation you’ve ever been with Breath Me In?
In our first gig after the release of our newest LP, right at the first song, our guitarist throughout the whole song couldn’t figure out why his guitar wasn’t making any sound, checking every possible problem, excluding the most simple one: it wasn’t plugged in.

Have you got a good reason to be in Behind Magazine?
Because we kick fucking ass!

BREATHE ME IN Metalcore