What did you do in the last six months?
Well, we finished recoding our new album “To Persevere is Diabolical” in September so in the last few months we’ve been rehearsing a lot getting ready to bring the new album on stage. Personally I’ve been also giving the last few retouches to the album artwork with Brent Elliott White who’s the awesome artist who designed it.

How much important is the image (look) for your band? Why?
We’ve always tried to have our image be coherent with our music. And it’s all cool as long as it doesn’t overcome it. When your looks become your main thing then you’re just a victim of the whole fashion and music industry. Call it emo, dubstep, brootel, whatever you want, djent, core, it’s all the same s%&t. Our song Kill FashionCore from our first album “Either Caesars or Nothing” is about that. 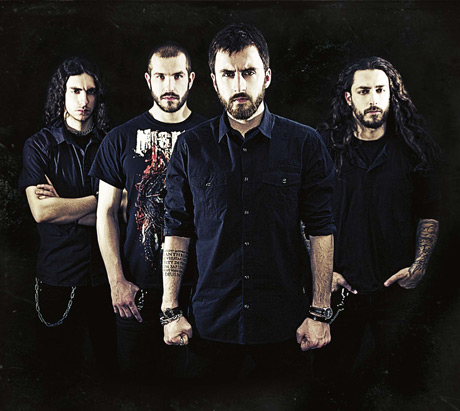 Talk to me about the new album “To Persevere Is Diabolical”. Are you fully satisfied?
The album was recorded last summer in Rome and is coming out March, 12th via Coroner Records worldwide. We release a single called “Necropotency” which is a song against reunion bands and what they stand for. We had some line-up changes (Tommy, lead guitars and Umberto, drums) and this has helped us evolve musically, everything is now darker and definitely meaner!

Who are some of the bands you admire?
Walls of Jericho, Misery Index, Hatebreed, Behemoth and Nickelback. Nah, just kidding.

What song is in your head right now?
This morning I woke up with “You’re the one that I want” from Grease in my head. I wonder what I dreamed!

What’s the most embarrassing situation you’ve ever been with Fomento?
During our last tour with Vader in Russia, one night Fabrizio (rhythm guitar) got so drunk that he lost his passport. We found it the morning after but, you know, the tour manager was very pissed because he could risk to go to jail if the police stopped us.

What’s the most ridiculous rumour you’ve read about the band?
It’s not really a rumour but more of a really stupid misunderstanding. We got our first album reviewed some years ago on a famous American metal magazine and the chick who wrote the review thought that the “Caesars” in our album title was the hotel in Vegas! She was all: “You guys are not Celine Dion, why should they let you play at Caesars” …WTF!

AS Rome or SS Lazio?
I am not really into football actually. I know Tommy is a big A.S. Roma supporter.

Do you’ve a good reason to be in Behind Magazine?
To tear your readers’ a new one when they’ll listen to our record! I guess that’s a reason good enough.

The new album “To Persevere Is Diabolical” is out!
Check the website: www.coronerrecords.net