Tell me about the story of the band!
February 1998 marks the date of conception of Catania based band None Of Us. Such formation resulted in a powerful blend of alternative rock and crossover, mixing dark and distorted. The first full length has been released on May 2006 produced by Carlo Bellotti from GF93, one of the most important and versatile figures of Italian metal/alternative scene, mixed by Kurt Ballou from Converge at Godcity studio (USA) and mastered at West West Side Music (USA) by Alan Douches (Sepultura,Chemical Brothers, Sick Of It All), “Further Hangin’ Menace”, that’s the full-length title. The second album of the band was released in July 2011, it was mixed and mastered by Mike Major (At the drive-in, Sparta, Coheed and Cambria). And now it’s the time of “Black Foundation”.

What did you do in the last six months?
We finished our new album. We put together the hardest version og the tracks then we put it on the record. get drunk for the very first sessions of recording to baptize the “Black” the best we could. Now, I’m just talking to you.

What have you got in your wallet now?
I got non wallet. Anyway, if you need to know if I got some money, well, I got three euro in my pocket, two ATM cards, and my lawyer card (I’m a lawyer, in case you need it). 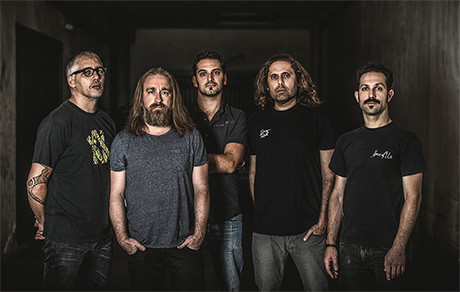 Why have you chosen this name for your band?
We didn’t plan it. We were just searching for the name of our band, and a real friend of us, Alberto Penzin, former bassist and founder of one of the greatest thrash metal band in Italy, Schizo, found it. We liked it and that’s it.

How important is the look/appearance for your band?
I really don’t know. You know, the band got five musicians, five souls, everyone of us got an idea of “look” or image. A personal influence in looking as a musician. The basic idea of the band was in no having an “image”, we’ve been searching for a neutral image, so people don’t waste time in recognizing a look, to listen just to the music. Then you could see us a rock band (long hair, black dress and so on) but it’s just the way we live and dress, every day.

Tell us about the new LP “Black Foundation”. Are you fully satisfied with it?
Oh, we’re really satisfied about the songwriting. It took the last four years of our life, you know. We had to run to record the eight tracks into Black Foundation and, honestly, I really think that, having a little more time, the sound would be more killing than it is. But, you know, sometimes you have to run to get the score.

Which is the highest point of the LP?
Oh, you know, it’s sounds like: “which one of your kids you love the most?”. Really don’t know, but I’ll try to answer, sincerely. I think that “12 O’clock high” (a cover from the best selling song bu Dirty Looks) is the one of the most powerful moment in “Black Foundation”. “Bleeding In The Ashes” (first single and video) is the other one.

…And the low point?
My shitty face on the inside booklet, no doubt.

How would you define your sound?
After 19 years career, three full lenght albums, two EP I really can say that we have a sound, a None Of Us sound, which is warm before being hard, larger before being high. I really get happy when people, listening to us “Black Foundation” expecially, says “I have to pump up the volume higher as the system can!” They want to feel “more”, they want to feel my music “inside”. Just the way we like to feel it.

Alternative Rock. Describe for me these words! And what do you think, is a good compromise to describe your style?
Man, in my modest opinion, Alternative Rock simply does not exist. All I can say is “five guys, amplifiers, drums, mic: volume to the stars”. I name it rock and roll.

Which bands have influenced your style?
Deftones, Prince, Rage Against The Machine, Pink Floyd and Faith No More. Freedom in playing music, musician that always played “their” music.

What is your idea of perfect happiness?
Serenity.

Tell me some of the bands you admire.
At The Drive In, Ministri, Linea 77, Il Teatro Degli Orrori, Faith No More, Deftones.

What song is in your head right now?
“Sometimes It Snows In April” by Prince.

And of your local music scene?
Everything cracked up. Nobody want to play in music business, no more. The music scene is in tribute band. That is not music. Is teathre, comedy, tragedy, but is not music.

What is the most embarrassing situation you’ve ever been with None Of Us?
Every time we get on the stage, we start to spit out each other. we like it so much, so the audience does it.

Have you got a good reason to be in Behind Magazine?
We don’t really. And I thank you so much for this time.