This year, the UCI World Cup is taking place as part of the Out of Bounds Festival. From June 10th to 19th, Saalfelden Leogang offers a schedule packed with everything a biker’s heart desires.

After Gee Atherton (UK) and Greg Minnaar (RSA) delivered an extremely close battle for the downhill World Cup 2010 that kept everyone on their toes, we can safely assume they will not be doing each other any favours this year either. 2010 world champion Sam Hill (AUS) or 2009 world champion Steve Peat (UK) will be sure to give their best to take the top ranks from them. The host country is represented by Markus Pekoll who is currently number 15 in the world ranking and certain to play his part in making this competition more than exciting at the Bikepark Leogang. In the ladies’ racing, Rachel Atherton (UK) can be expected to make a huge comeback after her injury and challenge last year’s winner Sabrina Jonnier (FRA). 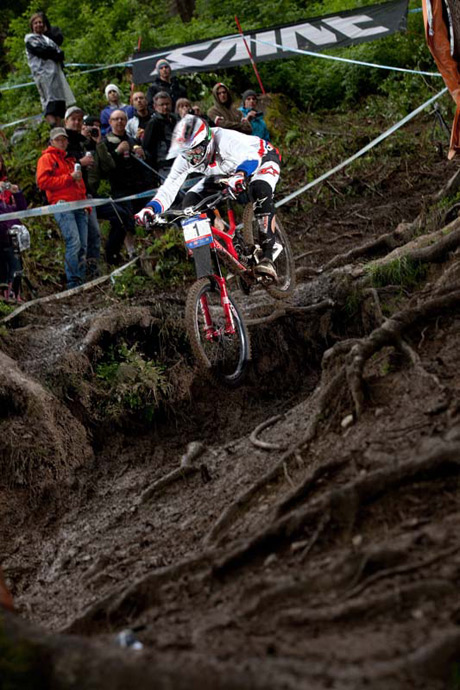 By the looks of it, the nerves of the fourcross community will not be spared either. Last year’s winner Jared Graves (AUS) is in perfect shape this year as well. Only in February he proved that fact by winning the Australian National Championships. However, his strongest competition from last year, Tomas Slavic (CZE) is not about to reduce the pressure. Graves had snatched last year’s world cup away from Slavic in a series of very close races. On the stop in Saalfelden Leogang, they and such top contenders as Roger Rinderknecht (SUI) will make sure to get a good head start on the way to the World Cup finals. The host country had good reason to be excited about the ladies’ fourcross. While Anneke Beerten (NL) won in Leogang, Austrian Anita Molcik won the overall ranking. We are keeping our fingers crossed for her and of course for all other athletes competing in Saalfelden Leogang this year!

With the UCI World Cup, the Out of Bounds festival really lives up to its name. As of right now, the Out of Bounds Festivalis no longer just one weekend of bike action on the highest level – from June 10th to 19th it’s ten days of one highlight after another in Saalfelden Leogang. As one of the most important mountain bike dirt jump contests and FMB World Tour gold event, 26TRIX should definitely not be missed. If you still don’t have enough bike action after that, you’re welcome to watch the iXS Downhill Cup, a European Fourcross Series race and for the first time, a C1 cross country race. Even better yet – sign up and take part! At the same time, the festival is a kind of main rehearsal for the World Championships that will come to Saalfelden Leogang in 2012.

Last year, the UCI surprised the biking world when they decided on the Bikepark Leogang as the venue. Even though the UCI calendar was technically already set in stone, the UCI approached Saalfelden Leogang at the last minute. It was the logical choice since Leogang is not only well known for the Out of Bounds Festival but also for the ongoing effort invested in bike park design and development of new options. The region is considered one of the most progressive mountain bike destinations in Europe and both parties felt that this was the perfect fit.

After Saalfelden Leogang was able to prove itself as a great venue last year, the region is looking forward to outdo themselves this year for the World Cup spectacle.

All further information about the UCI Mountain Bike World Cup in Leogang and the Out of Bounds Festival: www.mtb-weltcup.at