Livigno, IT (Jan. 20th, 2010) – It was a perfect sunny day for The  Protest World Rookie Fest finals at the Swatch Mottolino  Snowpark. The riding level was high and kids coming from all around the world confirmed that the progression of snowboarding is happening.

Diana Augustinova and Sebbe De Buck are the winners of the Groms and Katarzyna Rusin and Roope Tonteri the winners of the rookie’s categories.
The girls, despite being less than boys impressed the judges and the boys too! Girls showed their skills on the M course of the Swatch Mottolino Snowpark, while boys where attacking the L and XL lines. The winning girls of the Groms category are: Diana Augustinova(CZE), Maria Delfina Maiocco (IT) and Noemi Valloray (IT).
In the rookie’s category Katarzyna Rusin (POL) take the lead of Nora Thompson (NOR) who took second place, and Marika Enne (FIN) who finished in third place. 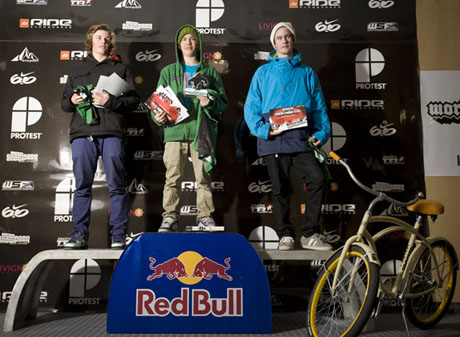 In the boys’ field the Groms podium goes to Seppe De Buck (BEL) (run : 50-50 180out, switch backside 540, frontside 720 e backside 720), Seamus O’Connor (USA) as second place and Lucas Baume (SUI) third place.
On the rookie’s side first place goes to Roope Tonteri (FIN) who secured the victory with a sick run that started off with 50-50 backflip out, un cab900, un backside900 e un cab1080. Brage B Richenberg (NOR) got second place and Niklas Mattsson (SWE) third one.

Goodies by Protest Boardwear and Ride Snowboards were offered to all the kids who attended the contest.

The event in Livigno is the first Rookie snowboard event with zero emissions. Thanks to the parternship with ClimatePartner, the international network that since 2004 manufactures integrated solutions for the voluntary protection of the climate for major sporting events, World Rookie Fest in Livigno has been certified as “Climate neutral”. The Organizing Committee and the World Snowboard Federation, always careful to protect the environment and the importance of reducing the effects of climate change especially in the mountains, have charged ClimatePartner to quantify the greenhouse gas emissions due to the mobility of athletes and the entire organization of the event. Over 140,000 kg of CO2 have been offset by credit for certificates of CO2 emitted from biomass Tirano in Valtellina