Tommy Larsen is a young Norwegian photographer who has blown me away with his work and from whom we will hear from again in the near future. I wanted to get to know him better but, even more, I wanted to get you to know him. Here is his interview.

Hi Tommy, I have a few questions for you. A few months ago I came across your photos on Flickr and began appreciating them greatly until one day I discovered that you were only 21 years old and just started photography in 2007. This has taken me completely by surprise. Is this true?

Yes, I got my first camera ever from my father as a christmas present in the very end of 2006. I had been thinking a little bit about getting a DSLR about 6 months before that, but I came to the conclusion that it was way to expensive. Now look at me, throwing out double or even triple the price of the D40 Kit on a lens alone!

Tell us about this photo. Picture of the Year in Playboard Magazine 2007 considering you had a D40 with an 18-55 mm lens for just six months. I imagine that this encouraged you even more.

At that time I enjoyed snowboarding a lot more than photography. I only used my camera instead of riding if my friends (who were much better than me!) were hitting some sick jumps or rails or whatever that I didn’t dare to. And that’s just what happened when I got this shot of Daniel Josefson in Playboard Magazine in 2007. Some friends of mine and myself were spending two weeks at Folgefonna, and I this was the only time I brought the camera up to the glacier, cause it was way too much fun shredding the park all day. But this kicker was waaay to big for my skills, so I just left my board at the camp and brought my camera instead. I remember there were like 10 “pro” photographers up there that night, with all those big lights and everything. I could never in my dreams have thought that I would have all that gear they had only one year later. And when this picture turned up in the magazine, and as #1to top it of, I was so stoked, and decided to get some better equipment and just go for it. 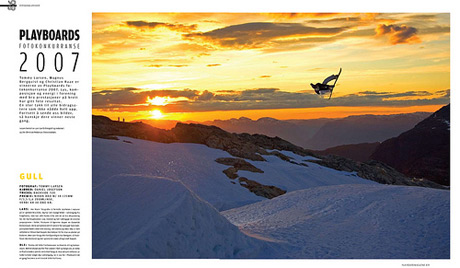 The past season was important for you. You gave your career – and your life – a change of direction, deciding to invest in your future. You make lighting one of your strongest points. I noticed that you have gradually moved from the classic Vivitar to the Elinchrom Ranger and are now using the Alien Bees. How do you acquire your knowledge in the field? Your technical growth is surprisingly fast.

Yeah last season was a pretty big change for me. I quit my 9 to 5 job (after saving up some money) in January, and just spent all winter shooting.
I met up with this new crew from Oslo called Next Production just a little bit after that, and shot with them pretty much all season. Really looking forward to the coming season now as well! Going to be a lot more shooting that last year, with a greater budget from sponsors and more experience that I had last season. So I hope for a couple trips outside Norway with some riders from the crew, as well as the filmer, Mikkel Fykse.

Make sure to check out the teaser for the movie! This is our first project, so I’m pretty stoked on what we got .

I have also noticed that you prefer fixed optics. Among your equipment you have a 35 mm, a 50 mm and an 85 mm and in particular I see that you often use the 50mm. We know the advantages of using these lenses in terms of photo quality: definition, saturation balancing, distortion and aberration control. Besides these, are there any particular reasons?

Hmm. I don’t think there are any other reasons actually. Just loved the 35 and 50 from the second I got them, and they always perform like they should!

I’d like to close this interview by leaving the readers with a few of the shots I prefer. How about you…what do you say? Which picture are you most proud of?

First of all, thanks for wanting to interview me! Really appreciate it.
I think the picture I’m most satisfied with from last season is the one where Aleksander Aasgaarden is doing that BS 180 over the “the view” sign in Porsgrunn, Norway. That was the first shot that I got on print outside of Norway, so that’s kind of a milestone for me.

Thanks Tommy for your time and good luck for your job.
Visit: www.larsen-photo.com. 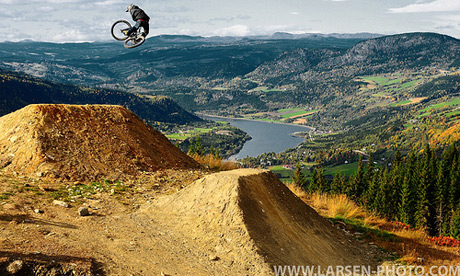 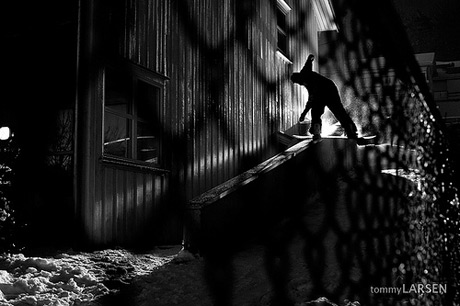 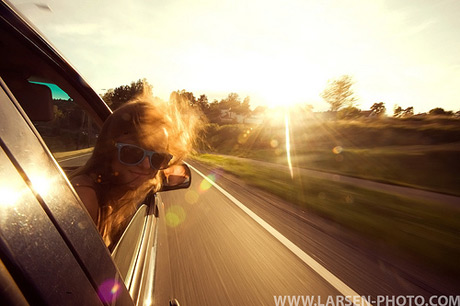